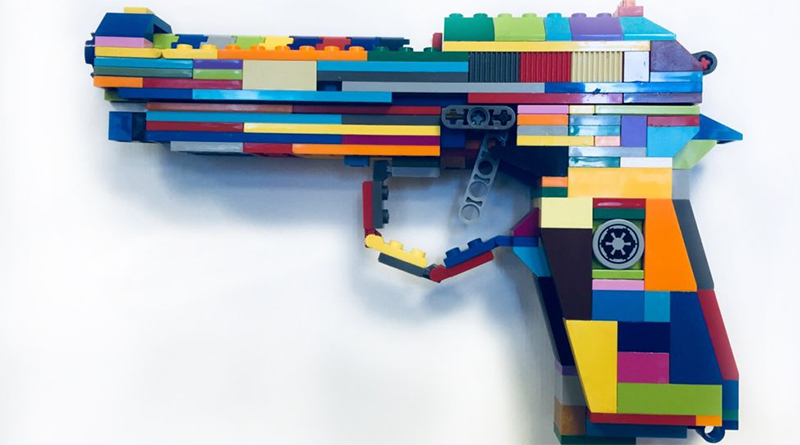 Several parents have complained about LEGO guns featuring in the Brick by Brick exhibition.

An argument is taking place around the Brick by Brick exhibition that is running at the Harley Gallery, near Sheffield, UK. Belfast artist David Turner has built a table of guns for the gallery, with the weapons featuring magazines containing LEGO bullets.

Nottinghamshire Live reports that parents are unhappy about the LEGO built guns.

“I took my two sons along because I was interested to see Lego-inspired artwork which my kids could copy at home,” Barry Johnson told the website. “I thought it was a very interesting exhibition but the guns, especially the multi-coloured handgun, was a bit too much. My kids are six and four and play with LEGO a lot at home and they are too young to be exposed to violence and guns.”

Mother Michelle Hanley also reacted negatively to the display: “I don’t get angry by very much but this display of LEGO weapons really got me irate … My friend was so upset she started a petition and is threatening to boycott it unless the display is taken down. At the very least, staff should warn parents but there is nothing.”

The brick-built weapons are accompanied by text explaining that Turner’s childhood was shaped by the Troubles, stating: “Turner’s art is intended as a critical commentary on the atrocities of war.”

“It’s good to have artwork created in the medium of LEGO as it’s something that connects with people of all ages,” said Lisa Gee, director of the gallery. “We are showing an exhibition created by artists from across the world, who have created work from LEGO because as a material they feel it adds an additional layer of meaning to their work.”

Other pieces on display include a model inspired by Philip Pullman’s The Golden Compass and a sculpture based on Anthony Burgess’s A Clockwork Orange.

The Brick by Brick exhibition will run at the Harley Gallery until April 19 and is free to visit.