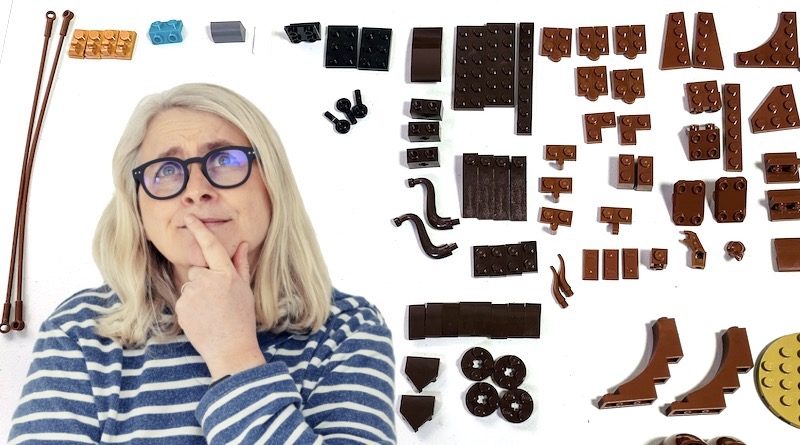 Author and screenwriter Emma Kennedy returns with what might be the ultimate LEGO quandary: should you sort your LEGO bricks before building?

To knoll, or not to knoll – that is the question.

I was pleasantly surprised, recently, to read a tweet from a much-loved comedy entertainer. She had posted a photograph of LEGO pieces, all laid out in beautiful rows. The pieces were sorted according to colour, each brick standing with its identical number. It was a delicious thing to behold. She’d been doing it for years, and she had no idea it was called knolling.

Knolling, for the unaware, is ‘the process of arranging related objects in parallel or 90 degree angles as a method of organisation’. It’s a slow and deliberate process, and one that, if you indulge in LEGO for its more relaxing qualities, can contribute to the feeling of calm.

It also prolongs the build. I have never understood the urge to open any new LEGO set and finish it as quickly as possible. Savour it! Make it last! On my YouTube channel, Relax with Bricks, we have a strict rule: only one bag a day (unless the bag we’re doing takes less than 30 minutes) and always, always knoll. I build in real time at RWB but I time-lapse the knolls, which can often take a good 20 minutes.

The beauty of that, of course, is that viewers can then choose if they want to watch the knoll in real time by slowing things down at their end. Knolling, in and of itself, is a way to relax. I love it. I then add in a process called ‘The Pearson’ for viewers. It’s a slow sweep over the knolled bricks, named after the AFOLWAC (Adult Fans of LEGO Who Are Chums) Cath Pearson, who first requested it.

Everything we do at RWB is slow and deliberate and chilled. It’s lovely. The extra advantage of filming the knoll is so that viewers who are building their own version of the set can use it as a template to build along at home.

Knolling, though, was not invented by the LEGO Group. The term was first used by a janitor in Frank Gehry’s furniture studio, Andrew Kromelow. They were designing chairs for Knoll, a furniture company best known for their distinctive angular pieces, and Kromelow began to arrange the tools they needed at right angles on all the workbenches. It allowed the furniture makers to identify the right tool at the right time and streamlined the process. He called it knolling, and the rest is history.

If you care to, you can Google an entire gallery of beautiful knolls. They’re artworks; visions in perfect colourful order. If you like carefully putting things into pots with labels (please see previous columns), then knolling is a logical addition to your LEGO life – and if you haven’t given it a go, do. I can guarantee it will enhance your experience.

There are occasions on RWB when knolling goes out the window, but these are few and far between, confined to the Author’s Own builds I sometimes do or whenever I’m tackling a 3-in-1 that’s rather large. I’ve just been building 31109 Pirate Ship, which is by far the largest 3-in-1 Creator set the LEGO Group has produced, and there is a disparity between bricks needed for the ship and those required for Skull Island.

In that instance, I split the bricks into coloured pots and firkle – that’s the act of rooting through a pot of bricks with a finger or, in my case, a small pair of forceps. Some people adore the sound of firkling, that gentle rifle through LEGO bricks, but for others it’s a nail-down-the-blackboard moment. For that reason, I tend to only do it sparingly.

Some of you, though, will hate the idea of knolling, and for many, part of the pleasure of LEGO is tipping out a bag and finding the piece you need each and every time. For me, knolling is a way of enhancing an already enjoyable experience, offering order and precision (and it’s also a general necessity if you are filming your builds).