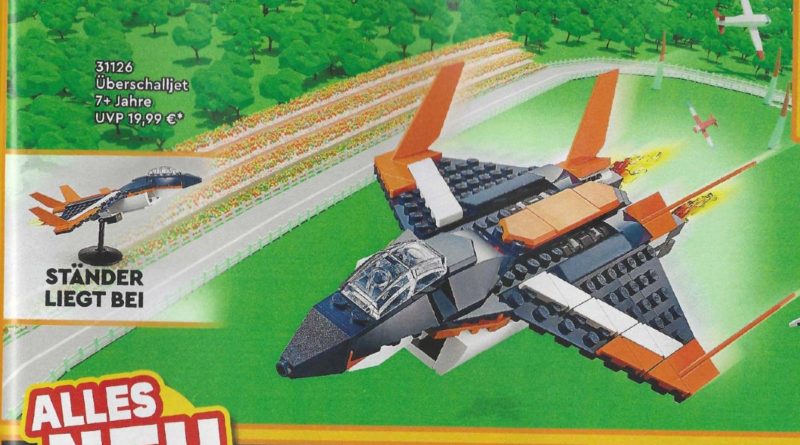 A German catalogue has shared the first looks at five upcoming LEGO Creator 2022 sets from a miniature mech to a displayable jet.

StoneWars has shared images of a that were scanned and sent to them by a reader, showcasing what else LEGO Creator has in store for 2022 outside of 31129 Majestic Tiger and 40518 High-Speed Train.

Beyond those two previously revealed models, images for six more have been detailed in the catalogue as well as their prices and release dates. These names have been translated and may not be accurate of the final names when they are added to the official online store. First up is 31123 Off-Road Buggy priced at €14.99. The green brick-built vehicle can be rebuilt into an excavator or quad bike.

31124 Super Mech is listed with a price of €9.99 and depicts a small mech similar to what can be found in Power Rangers and various other media. This can be rebuilt into a jet or a dragon. 31125 Mythical Forest Creatures cost €14.99 and the main model includes an owl and a hedgehog huddled around an opened book with an exclusive design featuring a dragon on the pages. Alternate creations for this set include a deer and rabbit and a squirrel.

31126 Supersonic Jet includes an orange, blue and white plane with a display stand to post the model as if it were in flight. Should the main build not be enough, options are included for a boat and helicopter and you can expect that set to cost €19.99. Next, is 31127 Street Car priced at €19.99, which includes builds for a Formula One car and a hot rod.

Rounding out the new sets is 31128 Dolphin and Turtle to whisk you away to an underwater world. Small models of a turtle and dolphin are included with options to rebuild into a fish and seahorse, each with a part of the seafloor to display them with.

All five of the newly revealed LEGO Creator 2022 models are listed as launching in March in Germany with worldwide availability and pricing yet to be confirmed.