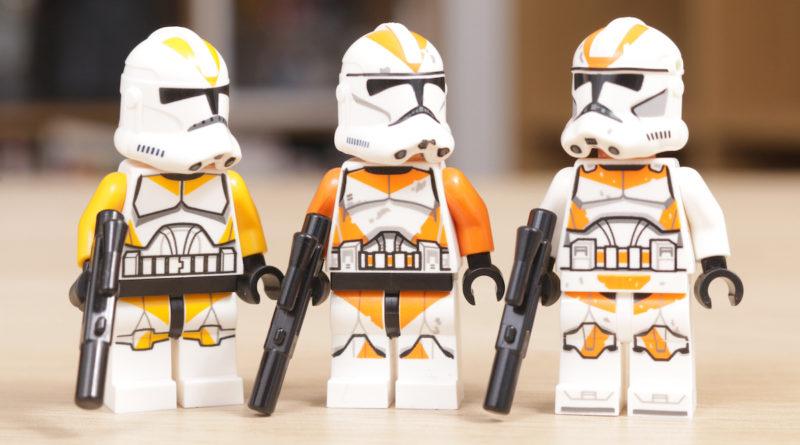 With the imminent arrival of 75337 AT-TE Walker comes the latest iteration of the 212th Clone Trooper minifigure, but is it the most accurate to date?

As well as a much-anticipated and updated version of Commander Cody, next month’s 75337 AT-TE Walker also features the LEGO Group’s latest attempt at creating the most accurate 212th Clone Trooper minifigure so far. The set includes a single 212th Clone Gunner and three 212th Clone Troopers, with the latter featuring the battalion’s distinctive orange and white armour.

Making their debut during the Battle of Geonosis in Attack of the Clones, this specific regiment has also appeared in numerous episodes of The Clone Wars animated series, plus many Star Wars comic books and video games. In the Star Wars universe, the 212th Attack Battalion (as the regiment is formally known) serves directly under the command of both General Kenobi and Commander Cody.

The first LEGO set to feature a 212th Clone Trooper minifigure was 75013 Umbaran MHC (Mobile Heavy Cannon) in 2013. Released as part of a line-up that included characters and vehicles from The Clone Wars series, the set featured a single 212th Clone Trooper carrying a long blaster. However, much to the frustration of many fans, the minifigure featured a more yellow colouring on its printed pieces and matching yellow arms, which failed to accurately reflect the look of it source material. If anything, the minifigure in the set seemed closer in appearance to the 327th Star Corps Clone Trooper minifigure included with both 7261 Clone Turbo Tank and 7655 Clone Troopers Battle Pack.

Printed details on the minifigure’s armour were fairly basic, giving it a more fresh off the Kaminoan production line appearance, as if the character had never seen any action. Beneath a basic Phase 2 helmet design was a nondescript face, reflecting the look of all of the clones created from the genetic template of bounty hunter Jango Fett.

The character next appeared in a much more improved form in 75036 Utupau Troopers in 2014. Two 212th Clone Troopers were included with this set, armed with stud launcher blasters instead of standard moulded weapons. This time around the LEGO Star Wars theme’s designers added fine details to the minifigure’s helmet and armour, including scuffs, marks, and battlefield wear and tear. The printing on the character’s legs also extended much further than on the previous version and the minifigure’s scowling face at least showed some signs of emotion.

Most importantly, the 212th Clone Troopers now boasted the correct orange colouring on their armour and arms, accurately matching their appearance in Revenge of the Sith. The same helmet mould used in 75013 Umbaran MHC (Mobile Heavy Cannon) may have been repeated in this set, but the extra level of detail and spot-on colouring was certainly what LEGO Star Wars fans had been long been hoping for.

With the upcoming 75337 AT-TE Walker, we now have 212th Clone Trooper minifigures that feature an even more refined design. Boasting a new helmet mould that also echoes the look of Commander Cody, the set includes three 212th Clone Troopers, one armed with a short blaster and two with longer blasters. The revised helmets include holes on each side for attaching visors, rangefinders and other accessories, offering some slight customisation options for fans.

As well as the updated helmet piece, additional weathering and printed details have been added, which extends to the feet of the minifigures. In addition, the 212th Clone Troopers also now have white arms instead of the previous orange, which certainly helps them stand out when placed next to Commander Cody. Interestingly, it’s this version of the 212th Clone Trooper that also appears in LEGO Star Wars: The Skywalker Saga as a playable character, suggesting the long-delayed video game and 75337 AT-TE Walker could well have have had similar conception and design schedules.

With the latest iteration of the 212th Clone Trooper, the LEGO Group has finally succeeded in evolving the look of the character over multiple sets, managing to continually refine and improve its appearance and finally deliver to fans and builders the most accurate version to date.