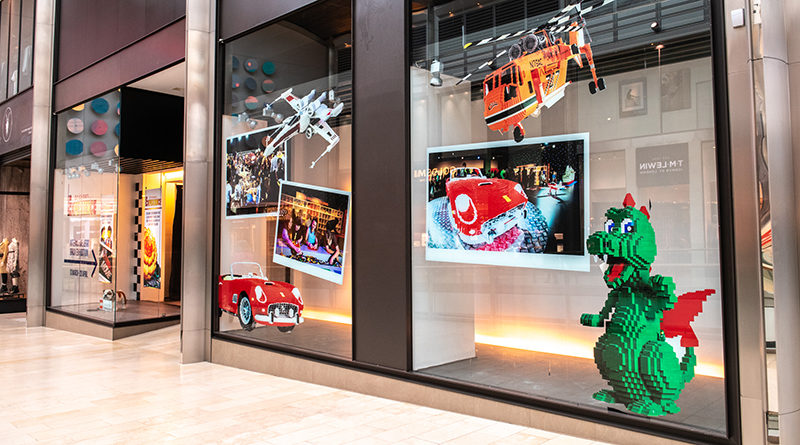 Meeting Ryan McNaught in Leicester, the Australian LCP (LEGO Certified Professional) is just as enthusiastic in person as one would imagine. He is more familiar than most of the expert pro builders thanks to his role as judge on LEGO MASTERS Australia.

The Brickman Experience, his first ever LEGO exhibition, has arrived in the UK for the first time and is located in Leicester’s Highcross Shopping Centre.

Here is the first part of an exclusive tour, in which Ryan talk through the models in the exhibition…

“This flower for example’s sake, it was part of a treasure hunt for kids to explore the gardens. The cool LEGO, the light yellow, was brand new when we made this flower, it was LEGO Friends of course that brought us that colour. I only had about three elements to choose from – the 2×4 brick, the 1×4 and I think a 1×2 and a 1×1 were the only parts in that cool yellow. I loved the colour so much I wanted to use it, and so the flower was the perfect opportunity to do it.

“My favourite part of the flower is actually the back, where you really get to see the contouring. When I was researching this particular flower, a begonia, I had only seen photos from the front. I had to make an assumption as to what a flower looks like from behind and I got it wrong. It actually opens in two halves from the back, I went like a dandelion where it splits, so I have had about an 85 year old lady at a big festival in a town called Balranald telling me how wrong my flower is.

“About 10 years ago now was the 50th anniversary of LEGO in Australia, so LEGO made a short film called the Festival of Play and I made all the models for it. These were used in the filming and all the stop motion and all that kind of stuff. These all are used in telling the story of how LEGO came to Australia. This British chap was sent to the colonies with a suitcase full of LEGO to try and introduce the Antipodes to the wonders of LEGO.

“Then The LEGO Movie came into our world a few years ago, in 2014, so we made these. The logo is made of a quarter of a million bricks, that is an insane LEGO model. We actually made them a couple of years before the movie came out.

“The animation team is Australian, based in Sydney, Animal Logic, so we did a lot of stuff. LEGO was quite new to them, animation wasn’t – so they needed to know about LEGO bricks, they were always ringing up and asking about different bits and pieces.

“Here is the first of our activities. We change the challenge regularly, usually for the first couple of days we ask them to make themselves, their face, so they’ll make it on a 16×16 and then they’ll put it up on display. And there is a bit of a curriculum behind it, we call it education by stealth, they don’t know they’re learning but they are actually doing some learning.

“Then my Ferrari, this is the Ferrari from Ferris Bueller’s Day Off, I could never afford the real one so I had to make one out of LEGO. LEGO doesn’t make a slope that has that very faint edge so I made a pretty simple decision to go with the plates because the curves were so gradual.

“There is the whole conversation, the anti-stud movement – people are trying to hide every stud, but in models like this I don’t mind embracing it. And you can see in the other stuff there is quite a contrast in where we hide and don’t hide. But it shows a certain style.

“This one here, the pirate ship, I modelled this off HMS Victory, it has a normal side and of course we have a cutaway on the other side. So I made this for Brickvention, which is a big AFOL event in Australia.

“I am an AFOL – that hasn’t changed, just because I do it for a job it doesn’t mean I am not an AFOL anymore. I do a lot of cutaways, that is my thing. As a child, I liked those cutaway books as a kid, you would see a tank cut in half and see how it works. I used to love those books as a kid so this is a way to do it out of LEGO.”

Check back next week as the tour of The Brickman Experience continues.