In the first half results for 2019, the LEGO Group has announced that while sales grew compared to 2018, profit was down and investment has increased.

The LEGO Group has revealed the company’s first half results for 2019, which show an improvement in sales compared to 2018. Revenue was up 4% to DKK (Danish Krone) 14.8 billion and global sales were up by 5%.

Operating profit is described as a “solid” DKK 3.5 billion (approximately $514 million) in the official statement, which is a decline of 16% on last year’s figures. This is attributed to increased investments that intent to create long-term growth.

“We are satisfied with our performance given the transformative shifts which continue to reshape the global toy industry,” said LEGO CEO Niels B Christiansen. “Against this backdrop, we continue to grow consumer sales and market share in our largest markets. This is thanks to our dedicated colleagues who are laser focused on collaborating with our valued retail partners and creating the very best brand experiences for fans of all ages.

“At the same time we’re making upfront investments to create a strong foundation from which to grow in the long term and inspire future generations. This includes opening new markets, expanding in China, creating innovative retail experiences and developing exciting new products and play experiences.” 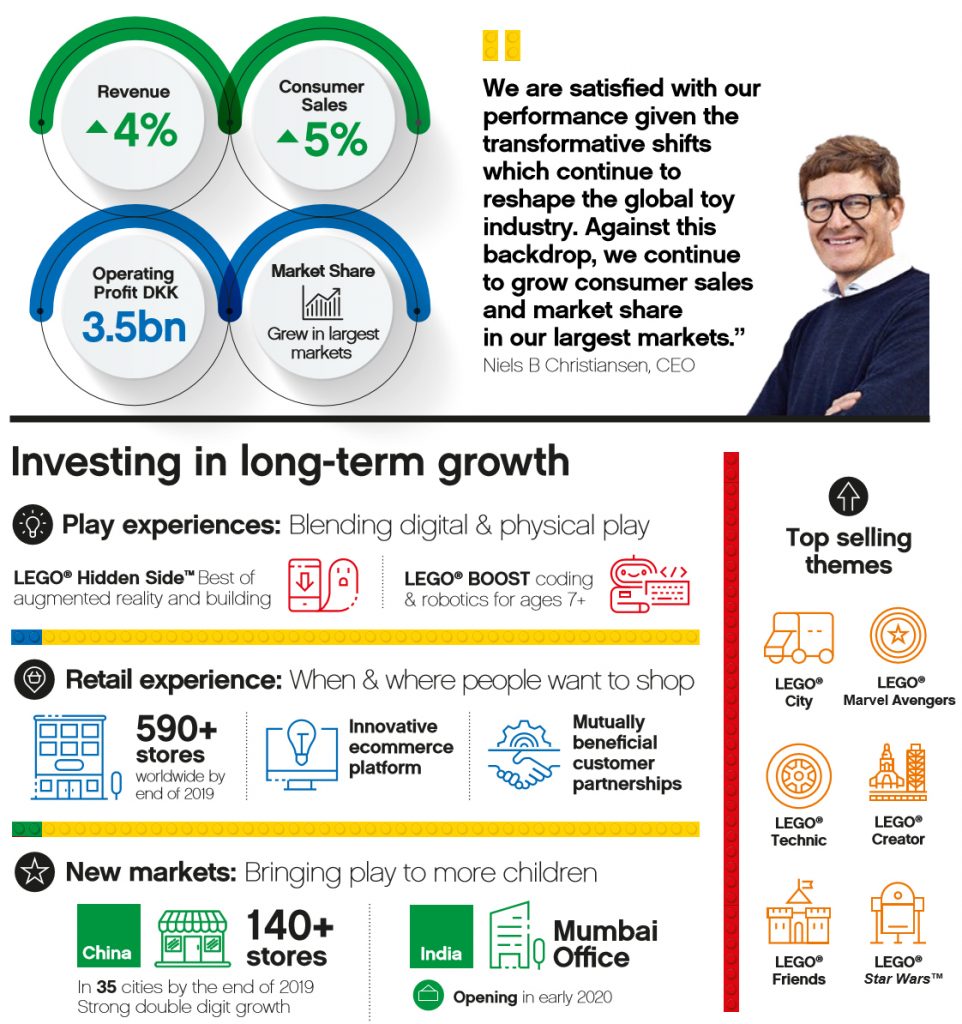 While traditional markets had single-digit growth, the traditionally smaller Chinese market continued its double-digit growth as the LEGO Group opens more brand stores in the region, with over 140 to be open by the end of the year.

Some of the best-selling themes in the period were City, Creator, Friends, NINJAGO, Technic and Star Wars.

“We are pleased with the performance of our evergreen favourites such as LEGO City and LEGO Technic,” said Christiansen. “We are also excited to explore innovative ways to bring the brick to life through digital play experiences such as new LEGO Hidden Side which blends the best of building with the awesomeness of augmented reality.”

A new Mumbai office will see an increased focus in India. “We see an opportunity to reach more Indian children and families who value the benefits of learning through play. The growing middle class, importance of education and growing economy make India a logical next step in our efforts to reach many more children around the world,” said Christiansen.