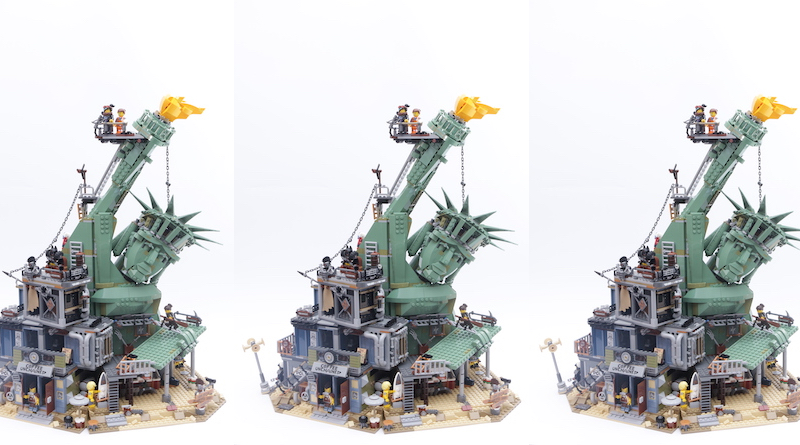 70840 Welcome to Apocalypseburg is like nothing we have seen before, and rightly the standout set from The LEGO Movie 2: The Second Part

70840 Welcome to Apocalypseburg is the latest in an ever-increasing collection of what can best be described as luxury sets. Following in the recent footsteps of such builds as 10261 Roller Coaster, 71043 Hogwarts Castle and 75222 Betrayal at Cloud City, these 16+ age brackets sets are identifiable for – amongst other things – their price, immense size, build techniques included within, level of detail and care shown to the source material, introduction of pieces in different colours and roster of unique minifigures. 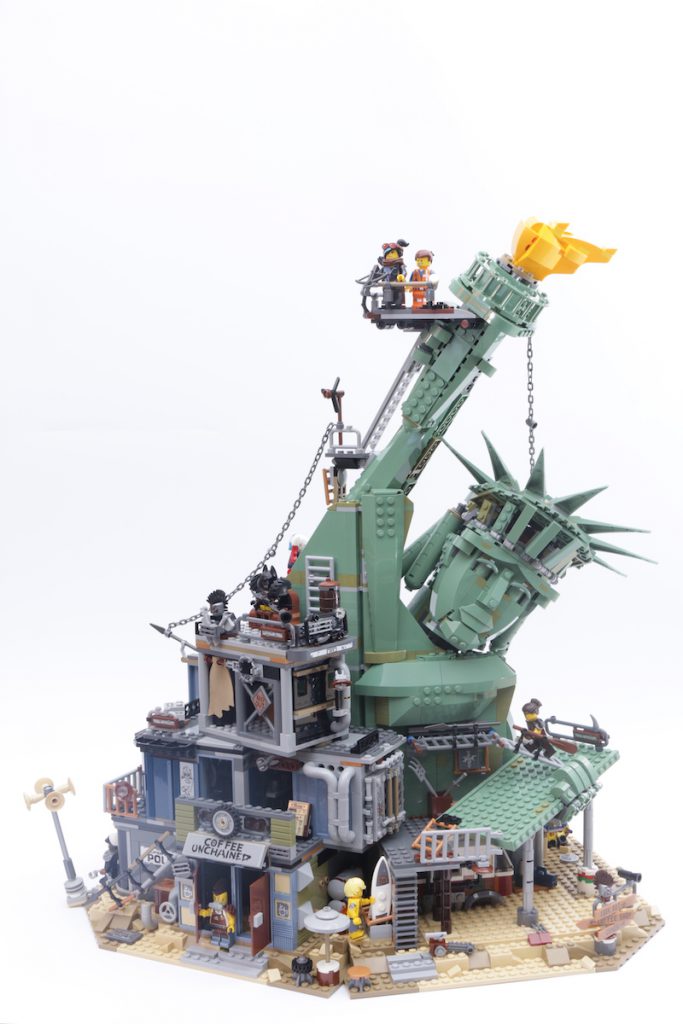 70840 Welcome to Apocalypseburg ticks all the same boxes and importantly, at the same time, is set apart from those other supermassive LEGO sets for the simple fact that really we’ve not seen a build like this before. That is immediately obvious from the ambitious size and angle that Lady Liberty has been built at, and even more apparent when you examine the unusual contouring and footprint applied to the base, and the multi-level smaller structures built around the central statue. There is much more to this set than a brief first look could take in.

And that is necessary to understand, because somewhat unfortunately, 70840 Welcome to Apocalypseburg also sits apart for its less-than-wholly-impressive first impressions. Where official imagery and box art for the likes of the Roller Coaster, Hogwarts Castle and Betrayal at Cloud City make for instant wows and easy sells, the box art and official imagery for 70840 Welcome to Apocalypseburg rather dampens its introduction.

This is because the angles that best compliment a lot of the set’s more intricate features and functions fail to flatter its most defining feature, and where human nature will first draw your eye – Lady Liberty’s face. Photographing under bright lighting and from direct angles, what is a well contoured and decently proportioned LEGO representation of the famous sand green lady’s face is at once both flattened and exaggerated.

From the lead image on the front of the box to those on the back and across the LEGO website, none really indicate the expertise and accuracy that is actually otherwise apparent in her expression, when viewed in person. In considering purchasing this set, realise that it is a far more beautiful one in person than its photography can otherwise impress.

That beauty is in more than just Lady Liberty’s features. Indeed, the whole concept behind this set, and its application, is fantastic to behold, through a lengthy but varied build process that, upon completion, presents such a massive, fallen landmark leaning at an almost impossible angle, surrounded by minifigure activity. From a distance this is an artistic, large scale brick-built structure giving off very strong Planet of the Apes vibes, and up close it’s a minifigure-scale dolls’ house of detail and creativity, with interior design courtesy of Mad Max.

What’s not easy to spot from official imagery is the clever application of a number of ‘vehicles’ in the build. Many of the base level’s structures have been created from un-built cars, vans and trucks, cleverly designed to look like they are straight out of CITY, or at least, they were until the DUPLO apocalypse hit. Life has found a way to go on in this otherwise desolate location and there are plenty of entertaining hints and details around the 360-degree build that demonstrate that.

These are all around a concoction of hideaway areas and hangouts that create a shanty town setting around the brick Statue of Liberty. Among these are a second floor bedsit (Bat-sit, patent pending?) for Batman, and a ground floor police station for Scribble Cop, as well as a tattoo parlour (also a barber’s), expensive coffee shop, gym and workshop. Everything has been given a cold dressing down, spikes have been added, cushions have been removed, and the colour palette is noticeably darker, with more earthy and metallic tones across everything. This may be a set that is comparable to 70620 NINJAGO City for many reasons, but, aesthetically speaking, it couldn’t be further from 2017’s standout LEGO set.

Whilst Batman and Scribble Cop have little locations in this set, interestingly, representation for the rest of the main characters from The LEGO Movie 2: The Second Part is rather lacking. Emmet and Lucy are found in the minifigure line-up, and tiny details dotted around (usually the result of some awesomely designed stickers) give suggestions of their presence, and to an even smaller extent that of Unikitty/Ultrakatty, Benny and MetalBeard, though, don’t appear in anyway at all.

Indeed, this is something fascinating about 70840 Welcome to Apocalypseburg. In spite of 2014’s The LEGO Movie being so clearly character-driven, the LEGO Group has whole-heartedly committed to creating, for its 2019 sequel’s flagship set, an immersive, lived-in location that – beyond easily removed subtle details – has little to link it to either the film or its main protagonists. For the older LEGO fan, this is perfectly fine and in most cases, helps with its appeal as something other than just of The LEGO Movie 2 world, but, all the same, it’s an interesting business decision when you consider where the identity for The LEGO Movie has otherwise come from.

It’s really credit to the LEGO Group and proof that the focus in this set’s design has been about nothing more than what can make it the best set it can be. The only thing that begins to feel like a gimmick the more you look at it is the inclusion of Harley Quinn. Green Lantern may also be a minifigure here, but that’s in the guise of his wackier LEGO Movie characterisation. Harley, however, is straight out of Suicide Squad. This version of the Batman rogue may have a cameo in The LEGO Movie 2, but there’s something about her inclusion in this set that feels off. No-one’s complaining, though, as she is the best minifigure in the entire line-up by a long, long way.

Business strategy aside, there’s a lot to take in and a lot to admire about 70840 Welcome to Apocalypseburg. Ignore how you think Lady Liberty’s face looks in the photography. Try to see this set in person, then order it through Brick Fanatics’ affiliate links to support the work we do here.

It’s easily the best set from The LEGO Movie 2: The Second Part’s range, and it will remain as one of the best releases of 2019, undoubtedly. A luxury LEGO set in every way. Not one that everyone will be lucky enough to own, but one that everyone should try to own.

70840 Welcome to Apocalypseburg is available now at shop.LEGO.com. You can help support Brick Fanatics’ work by using our affiliate links.