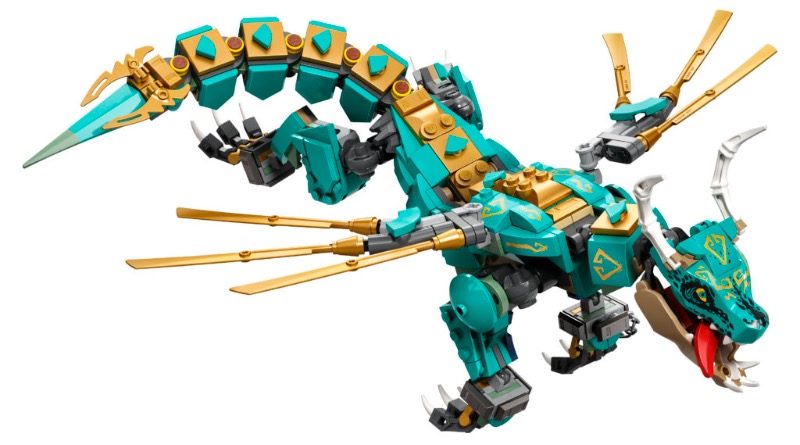 The designer behind LEGO NINJAGO 71746 Jungle Dragon has revealed that he based its unique appearance on a ‘big, hyper dog’.

To be fair, one look at the teal dragon should tell you as much: those frenzied eyes and huge tongue just scream ‘excitable pooch’, but according to the set’s designer (and ex-Brick Fanatics contributor!) Jme Wheeler, the reference runs even deeper than that.

Jme shared a rare insight into the LEGO design process over at Brickset, where he also revealed that this is the first NINJAGO set he’s ever designed. It’s also the second of his sets to hit shelves, and the first to do so outside Billund – his first, 40501 The Wooden Duck, is exclusive to the LEGO House.

We’ve had countless NINJAGO dragons over the past decade (this year marks the theme’s 10th anniversary – do you feel old yet?), so coming up with a fresh design can’t have been easy. Fortunately, it sounds like Jme was well aware of the challenge that lay before him, and that’s probably why he looks to have tackled it so brilliantly.

“I enjoyed trying to find a way to bring something new to the pantheon of popular NINJAGO dragons,” he explained. “My main goal was to try and infuse it with as much liveliness as possible. It was important for it to appear constantly in motion.”

Those traits then tapped into Jme’s other inspiration for the dragon’s design. “I also wanted to give it the personality of a big, hyper dog, slobbery tongue, overactive tail and all,” he wrote.

71746 Jungle Dragon will launch alongside the rest of the NINJAGO Season 14 wave on March 1. You can support the work that Brick Fanatics does by ordering yours using any one of our affiliate links.