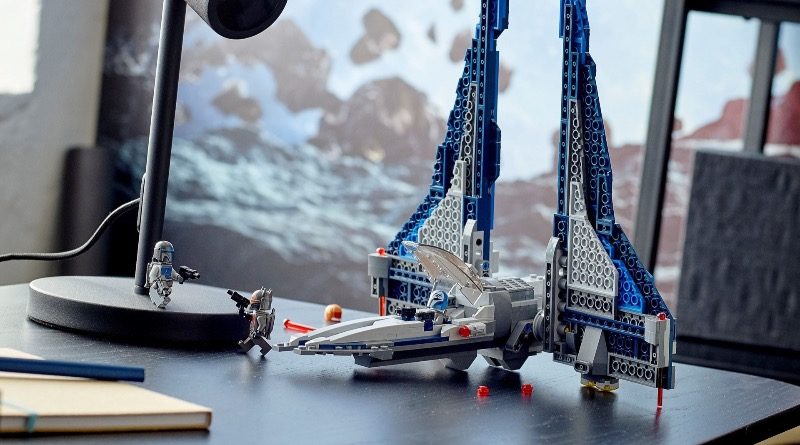 The official product photos of LEGO Star Wars 75316 Mandalorian Starfighter are extremely misleading – but here’s how you can fix your copy when it arrives in August.

We’ve already got our hands on the newly-revealed 75316 Mandalorian Starfighter, and you can check out our full, early review by clicking here. But our immediate takeaway from assembling the 544-piece set is that it just doesn’t work as advertised by the official product imagery.

We’re talking specifically about the shot below, which portrays the Mando ship – itself an updated take on 2012’s 9525 Pre Vizsla’s Mandalorian Fighter – as standing upright, with the wings positioned at a 90-degree angle. And while the wings can indeed rotate and lock in place, sitting perpendicular to the cockpit, it’s the upright position that doesn’t quite function as promised.

That’s because the engines at the back of each wing are just a couple of studs too long next to the sloped bricks used for landing gear, creating a slight lean to the ship when displayed in the landing position seen in both Star Wars: The Clone Wars and Star Wars: The Mandalorian. See below for the result, which is also visible in the lifestyle image at the top of this story (although the camera tilt seemingly attempts to hide it).

Fortunately, there’s a relatively easy fix: you just need to add a little extra height to the landing gear. A pair of 1×2 plates stacked under the front slope piece and a 1×1 plate on both of the rear slopes solves the problem so effortlessly that it’s a wonder the designers didn’t include them in the first place.

If you’re planning on picking up a copy of 75316 Mandalorian Starfighter when it launches on August 1 – and you want to display it in the manner that the LEGO Group claims you can straight out of the box – make sure you’ve got a few spare plates to hand. In the meantime, don’t forget to check out our detailed review of Bo-Katan Kryze’s personal transport.