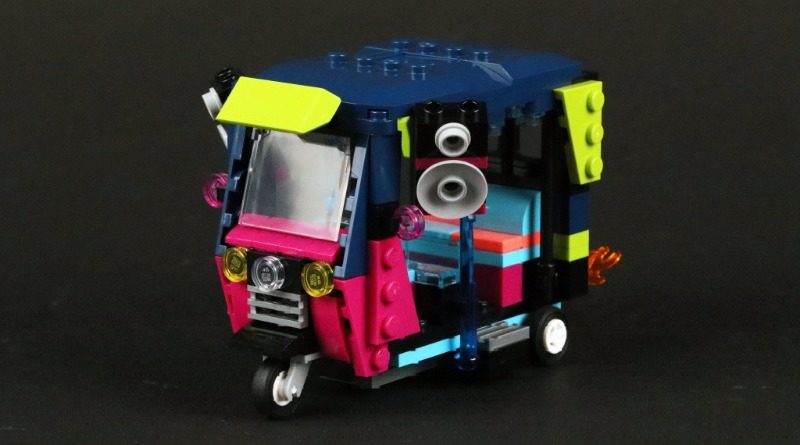 The designer behind LEGO Creator 40469 Tuk Tuk has revealed how he pushed the set’s colour scheme to its extremes during the development process.

Speaking to Northern Brickworks about his role in designing the 2021 model, LEGO designer James May explained that the majority of the design process was spent figuring out the colour scheme, with up to 30 different combinations tested simultaneously. This neon-tinged design, however, was built simply to ‘see how far we could take it’.

“The finished LEGO set would never be this wild, but it is good to make models like this to stretch the limits of our imagination, as I don’t think we would have the fun colours and extras like the tiffin lunch boxes without them,” he said.

While this is the only sketch model the designer supplied a photo of, it’s not the only one he went through: in the early stages of the development process, he attempted to construct the frame using bars and clips, before reverting to far sturdier bricks.

James also revealed that he spent just four to six weeks working on 40469 Tuk Tuk. That’s a comparatively narrower time frame to those usually discussed in relation to LEGO sets, which often run to 18 months, or even two years. Given the diminutive size of this pocket money-priced set, though, it’s perhaps not so surprising.

If you’ve already bought and built a copy of the minifigure-scale transport, you’ll know it contains a staple of LEGO sets in a fire extinguisher. And according to James, it’s actually an accurate reflection of real-life tuk tuks in India.

“We gathered a bunch of reference material on tuk tuks from the comfort of the office in Billund,” he explained. “From this we found out cool facts like how in India, they are required to have fire extinguishers on board, which ended up being a nice detail added to the LEGO set.”

40469 Tuk Tuk is available now at LEGO.com. You can support the work Brick Fanatics does by ordering your copy using our affiliate links.