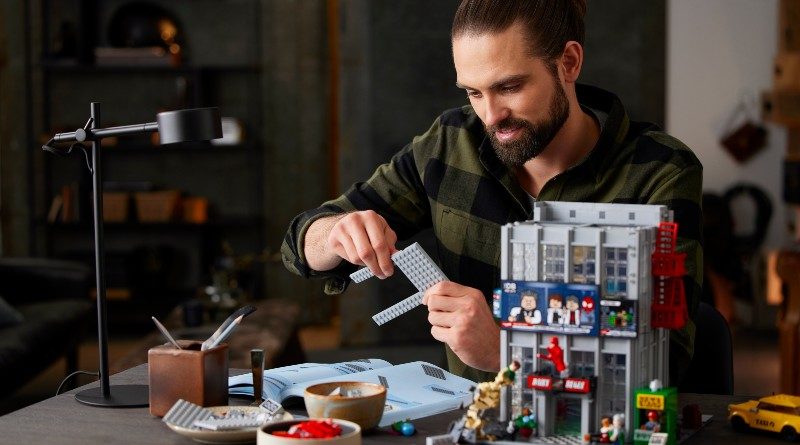 With decades of Marvel history to draw from, which comic books, video games and movies has the LEGO Group turned to in putting together 76178 Daily Bugle?

When it launches on June 1 – or May 26, if you’re a VIP member – 76178 Daily Bugle will overtake 76042 The SHIELD Helicarrier as the largest LEGO Marvel model to date. With its designer Mark Stafford admitting that this a dream LEGO set for him, surely there are some references to the web-slinger’s longstanding history?

With 25 minifigures, 82cm of height and 3,772 pieces, there were bound to be at least a few Easter Eggs and inspired design points in 76178 Daily Bugle, so here’s everything that the set seems to reference in the build.

It wouldn’t be right to make a LEGO Spider-Man set without at least one part being inspired by the hero’s comic book history. Thankfully, 76178 Daily Bugle does just that, and it starts with one of the most eye-catching parts of the build. The giant screens that sit midway up the building contain quite a few Easter eggs for fans to spot. For the comics, this includes a reference to the clone saga of comics, which featured numerous Spider-copies running rampant, like that of Ben Reilly – AKA the reformed Scarlet Spider who features on the news announcement.

At the top of the building is a familiar four-wheeler for many Marvel enthusiasts. The Spider-Mobile was designed by Corona Motors in Amazing Spider-Man #130 as an advertisement on wheels when the web-slinger fell upon financially hard times.

While some may recognise the newspaper cover in the second-floor newsroom of the building from Sam Raimi’s Spider-Man 2, the iconic image of the superhero suit hanging out of an alley’s bin actually originates in Amazing Spider-Man #50 – the second reference to that run of the comics.

To kick things off, it’s worth mentioning that the vast majority of Daily Bugle issue covers in the set are taken directly from the 2002 and 2004 Spider-Man movies, including those that read ‘Times scare’, ‘Reward for photos of Spider-Man’, ‘Who is Spider-Man?’ and ‘Doc Ock still at large’. The latter of those is also a remake of a tile from an older set, 4855 Spider-Man’s Train Rescue, which was based on Spider-Man 2.

Green Goblin’s attack on the Daily Bugle may also be a reference to the 2002 film, wherein the villain terrorised the building attempting to discover the identity of Spider-Man. After all, we’re not so sure that it’s a coincidence that the destruction is coming from Peter Parker’s office.

In the lobby of the Daily Bugle, another TV screen displays a story about a sudden shortage of Garlic with a vampiric foe featured in the broadcast. Morbius’s inclusion here is likely a reference to Spider-Man: The Animated Series, where the web-slinger teamed up with Blade, another minifigure in the set, to face him. Garlic was one of the weapons of choice for the vampire hunter, possibly leading to there being less of it spare in New York.

The overall design of 76178 Daily Bugle itself appears to come from a few different sources, with the grey and segmented window design likely hailing from Spidey #1, which also featured the layer of bricks before the sign atop the roof. You’ll have to read on to discover the second possible source.

There’s no better way to start this section than with a classic Spider-Man meme. Peter Parker’s office features an image of Spider-Man framed on the wall. We’re not quite sure why the reporter would want to make his secret identity even more obvious, but either way, the entire room is one big Easter Egg for this particular meme. All that’s missing is the edge of an armchair.

Unsurprisingly, the set also features more than a few references to one of the most popular video games based on the hero, Insomniac’s Spider-Man for the PlayStation 4. The most obvious of them is also located back on the giant curved screen with two to spot. The first is the title of the broadcast: Just the Facts with J. Jonah Jameson was an internet show created specifically for the game after the eponymous editor retired from the newspaper.

On the other side of the screen is an advertisement for Norman Osborn’s campaign for Mayor, one of the plot points within the video game. Another reference to the PlayStation Spider-Man is the red signage at the top of the building. Most iterations of the building feature the name in white or grey. However, the game included it in bright red, acting as a beacon of the news at night. There have been a few other iterations of the sign in red, but we’re chalking this up as another for the game.

There are some honourable mentions we have to recognise such as a poster of Wilson Fisk – or the Kingpin – in the newsstand and plenty of missed calls from Eddie Brock in Betty Brant’s office. Hopefully his symbiotic relationship is going well, but the many calls suggest otherwise.

LEGO Marvel 76178 Daily Bugle is available May 26 for VIPs and everyone else starting June 1. You can help support the work that Brick Fanatics does by purchasing your LEGO using any one of our affiliate links.