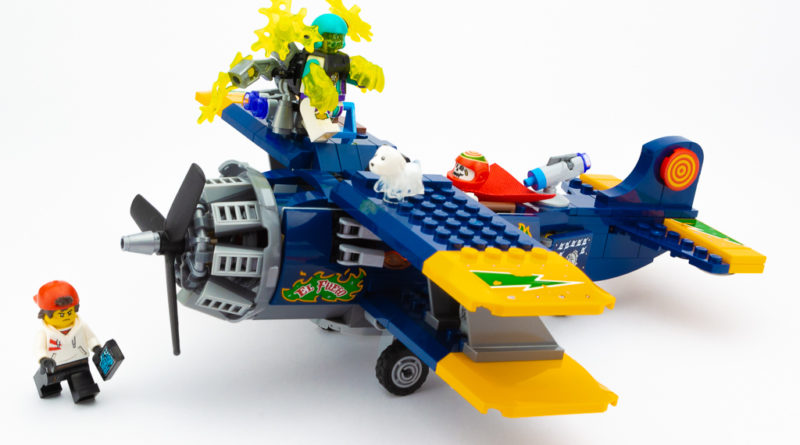 Hidden Side’s 70429 El Fuego’s Stunt Plane is a hefty build for a commonplace LEGO vehicle, but is it a worthy addition to your collection or one to let fly by?

LEGO Hidden Side has made its mark in the short time it has been on the shelves. 70429 El Fuego’s Stunt Plane marks the first airborne vehicle for the range – does it soar to great heights?

70429 El Fuego’s Stunt Plane is a visually appealing set with three minifigures, one dog and a very impressive bi-plane loaded with SNOT (studs not on top) building techniques and app-related play features.

Jack is presented in his white hoodie which also includes the newly coloured hood element. Even if you already own a white hooded version of the character, the printing on both his top and legs are generic enough to be used for custom minifigures and still be useful. The bone keyring detailing on the legs, which makes sense given that Spencer the (ghost) dog belongs to Jack, is particularly enjoyable.

Mary Breaksom looks great here. She carries a rocket pack, presumably to accompany El Fuego on his daring stunts, but her leg and torso jumpsuit print with the star are like something straight out of the 1980s – not a bad thing by any means. The LEGO Group is clearly enjoying the return of teal, scattering it around the colour palette whenever opportunity calls – the rugby helmet appears here as a recoloured element too.

Mary is also the unlucky minifigure who gets possessed in this set and LEGO provides an additional bag of trans-neon yellow energy blast elements to use as necessary. She also comes with an alternate head to show her ghoulish state, recognisable from her goggles adorning an otherwise grotesque face on a trans-neon yellow element.

It’s interesting to note that El Fuego (aka Douglas Elton) is now a skeleton rather than a human minifigure, but there’s a good reason for that in the theme’s lore. He comes with a helmet that matches the stickering on the tail fin of the plane and a red cape – a necessity for all daredevils, obviously.

Planes are a common sighting in LEGO sets with one usually appearing in almost every theme going. In fact, both the Scooby-Doo and Monster Fighters ranges featured sets with a plane in.

What makes this one stand out compared to those frequently released, is the sheer weight of the build and how solid it feels. If it weren’t for the deliberate Hidden Side theming, stickers and minifigures included, this set could probably pass for a Creator 3-in-1 release.

Making use of some SNOT building techniques, the designers are able to achieve a satisfyingly smooth side surrounding the cockpit and fuselage, leading to the front where a very impressive radial engine heads the plane. Care is needed as the grill slopes encircling the propeller are very easy to push in, which does get a little irritating at times, but it’s only a small issue. Twisting the engine can change the colour of the top from dark blue through coral, yellow and medium azure intended for use in conjunction with the Hidden Side app.

There are a few stud-blasters dotted around the plane, which add another element of play for kids, but doesn’t enhance the overall aesthetic and detracts slightly from the realism of the bi-plane.

Those aside, there aren’t actually all that many other play features integrated other than a few hinged panels revealing more coloured areas for the app. Given the brilliant transformative functions many of the Hidden Side sets feature it’s somewhat disappointing that this plane doesn’t turn into something more monstrous.

All in all, 70429 El Fuego’s Stunt Plane is a decent model that with a few minor modifications could also happily live in a City layout. The Hidden Side theme continues to deliver strong sets, and while this might not be the most imaginative of the bunch, it’s still a great model. 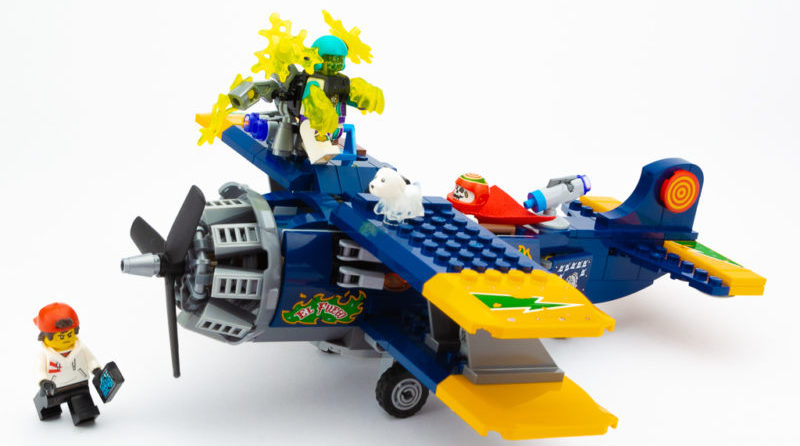