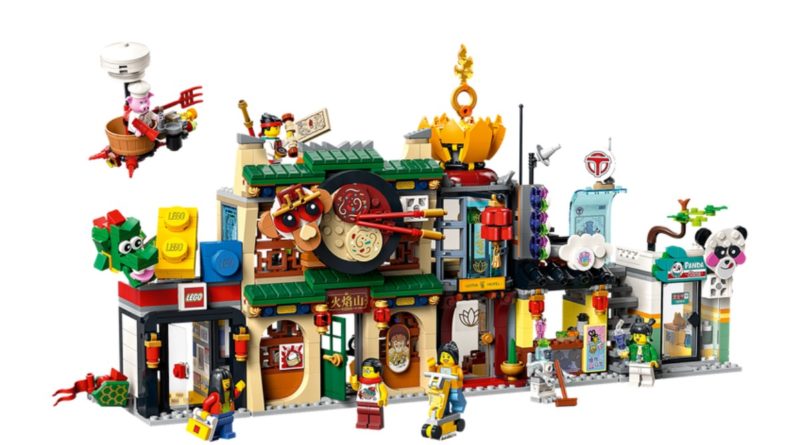 Launching on January 1, the new LEGO Monkie Kid 80036 The City of Lanterns set continues to reveal even more secrets.

80036 The City of Lanterns includes a small pink pig-themed train that goes around the set on a looped track. Inside the driver’s cabin and at the train stop is a red ‘T’ logo on a circular white background. The same logo has appeared before on the classic 6399 Airport Shuttle set.

Near the train station entrance is a blue screen featuring an online information ‘bot’. This minifigure image is more than likely a reference to the Infomaniac character who appeared in the LEGO Island video game and sometimes in LEGO Town and CITY sets.

Located next to the mini–LEGO Store on the build is an outdoor crayfish restaurant. In front of the eatery is a yellow rail with a sign that has a ‘ZNAP’ logo on it. This refers to a LEGO theme from the late 1990s that featured complex pieces.

There’s a blue sign attached to a telegraph pole near a billboard advertising Chang’e’s moon cakes that has a waving minifigure and the number ‘90’. This is a nod to the LEGO Group celebrating its upcoming 90th anniversary in 2022.

A couple of golden signs near the train station entrance reveal yet another secret. The two circular logo pieces are references to both the Bohrock faction from LEGO BIONICLE and its short-lived successor, HERO Factory.

Who knows if any more fun secrets are hidden within 80036 The City of Lanterns? We’ll have the chance to find out when the new LEGO Monkie Kid set is released on January 1.