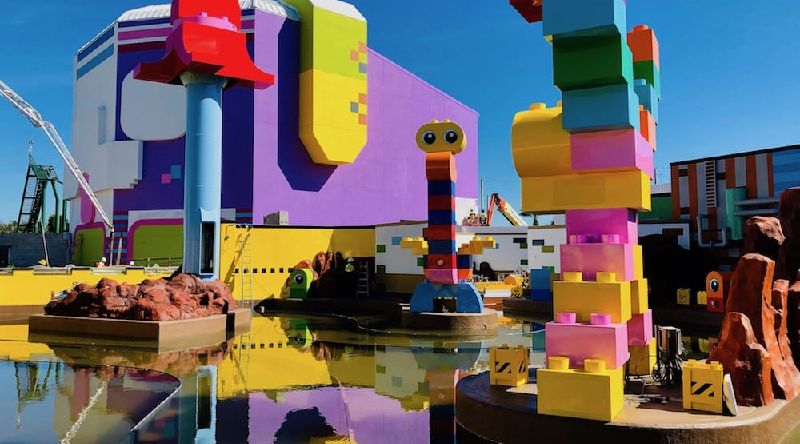 With THE LEGO MOVIE WORLD just one month away from opening at the LEGOLAND Florida Resort, behind the scenes secrets are being shared.

In a few short weeks, LEGOLAND Florida Resort will be the first theme park around the world to launch THE LEGO MOVIE WORLD, an entire new area of the park dedicated to The LEGO Movie and the films that followed. Brady McDonald of Blooloop took a tour of the under-construction theme park to find out how things are shaping up.
“We are built for kids,” Merlin Magic Making’s Keith Carr told him. “Everything is from the eyes of child. Everything is from those sightlines and how kids will interact with it.

The scale in the world is 25 times larger than a real LEGO brick, making guests feel like minifigures. As soon as the sequel to the original 2014 film was announced, conversations about actually building a land inspired by The LEGO Movie got serious.

Working alongside the movie development almost caused a big problem. “Some of the early on concepts that we were working against, some of those characters have been written out or changed,” said Carr. “We had to be very careful about what we picked. We could’ve designed a whole thing around a character that’s not in the movie anymore. And we were very close to going down that line.”

With the LEGO Legends of Chima theme retired, this new land saw the theme park creative team figure out to re-imagine the Quest for Chi ride to become the Battle for Bricksburg.

Unikitty’s Disco Drop will lift riders to the top of the tower before sending them bouncing and spinning back toward the ground. As the ride takes place, Unikitty’s mood will change and her face at the tower’s top will reflect that.
There will also be the opportunity for indoor character meet and greets in Emmet’s Super Suite, grab a bite at Taco Everyday and buy souvenirs at the Awesome Shop.

THE LEGO MOVIE WORLD will open on March 27.