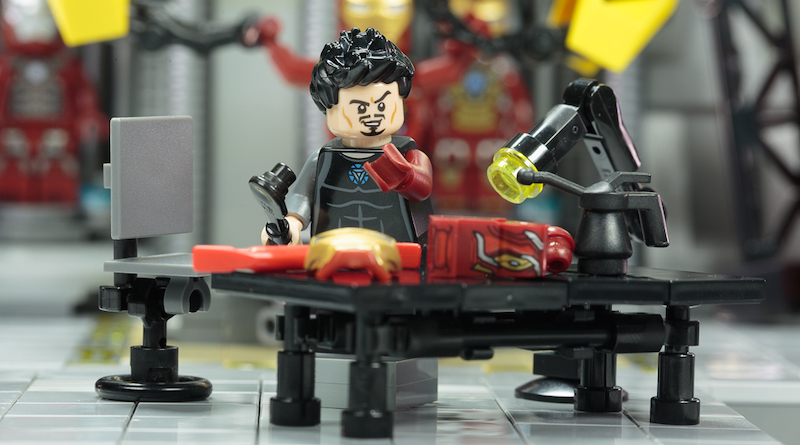 Brick Fanatics Magazine delves deep into the world and lore of Iron Man inside Issue 6. Go behind the scenes to learn how we constructed a LEGO workshop for the feature shoot

Photography can lie to you. The recent workshop build providing decoration and detail to a special retrospective of seven years of LEGO Iron Man minifigures inside Brick Fanatics Magazine Issue 6 is a great example. While it may look like an expansive workshop was constructed, the reality is that it was merely 32×32 studs. That minimal footprint was divided evenly across four 16×16 squares constructed for the purpose, flanked by a collection of wall elements that can be rearranged. Here is how Brick Fanatics Magazine did it.

Brick Fanatics Magazine is a new print publication all about LEGO. Single copies (with additional costs for postage and packaging), as well as 12-issue and 24-issue subscription packages (which offer free issues, free postage and guaranteed delivery fastest and first) are available at www.brickfanatics.com/magazine. Issue 6 is also on sale in stores in the UK now and in the US from July 11. 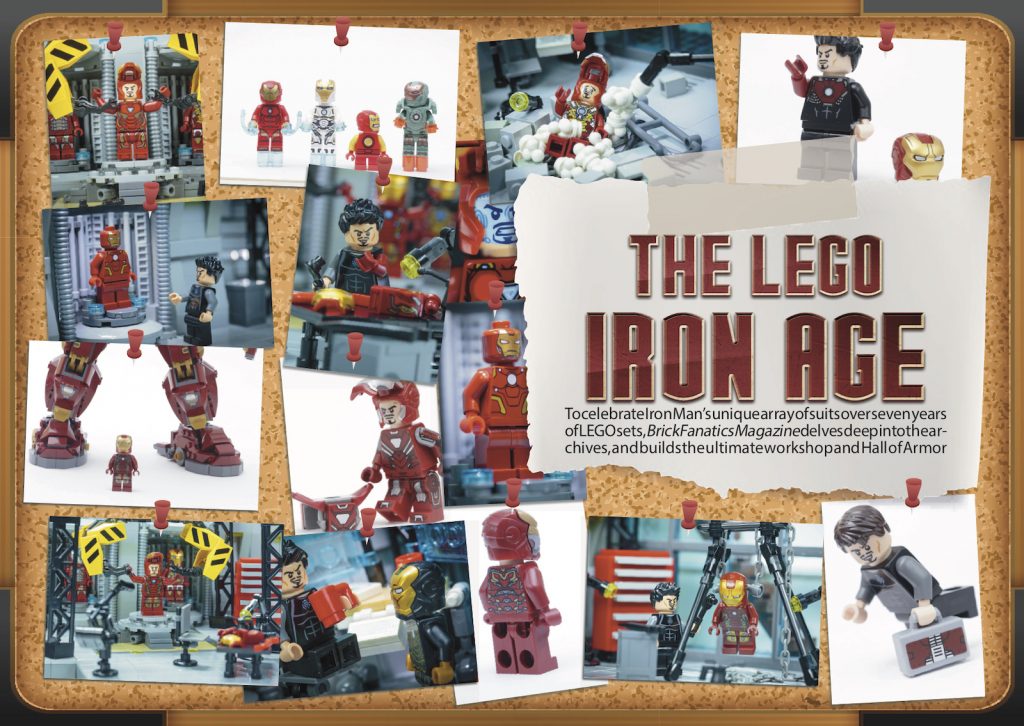 To spare fingers during the process of reconfiguring the layout between photographic compositions, the tiles were laid on bricks two studs wide and various lengths so as to make them much easier to disassemble. Three standard squares were constructed with the fourth containing the circular platform – all of them can be rearranged into various configurations.

The base of this fourth square is constructed the same as the other three just with a different tile configuration on top, to make room for the platform.

The beginning of a hall 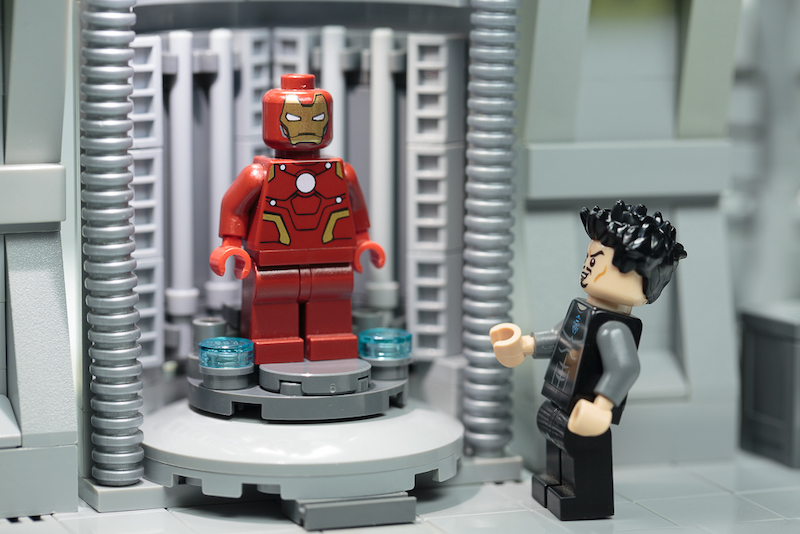 Walls for the build comprised of various bits that could also be re-arranged. The biggest sections were the suit racks, of which two identical ones were constructed. 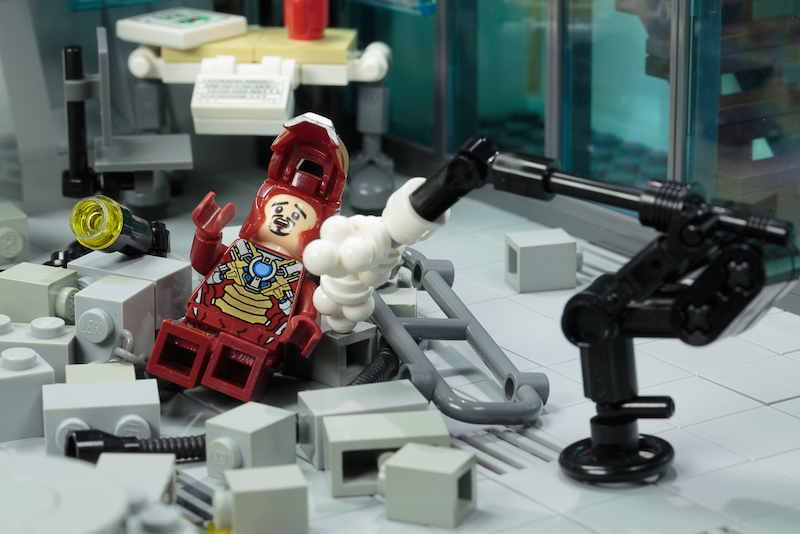 One of the most memorable characters in Tony Stark’s workshop is the poor robot who keeps trying to spray him with fire fighting foam. The one included in the recent official set was rather disappointing, so Brick Fanatics Magazine set about offering some more life to this version. 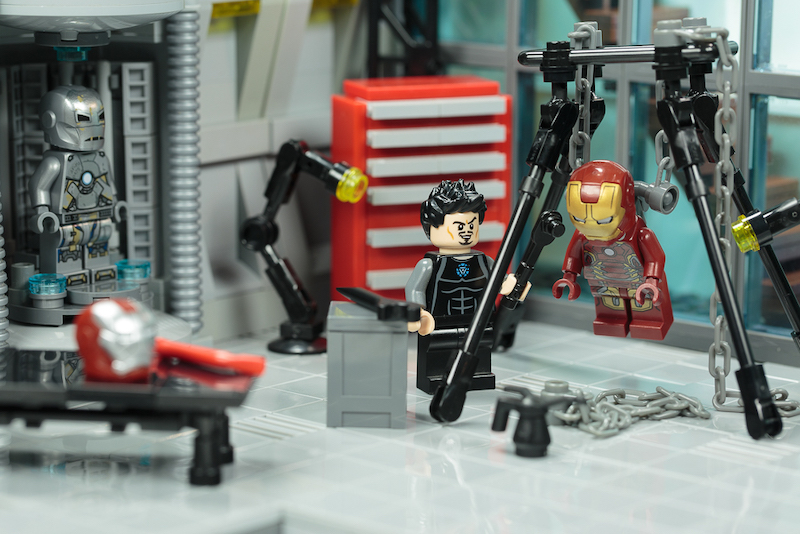 In the early films, when Tony Stark’s operation is a bit more analogue, he is often depicted wrenching on his suits by hand. To do this he needed to suspend them with a chain lift.

Tony likes to refer to himself as a mechanic so it only makes sense that his workshop would have a huge toolbox. This one needed some SNOT construction to make the walls on the sides thin enough. 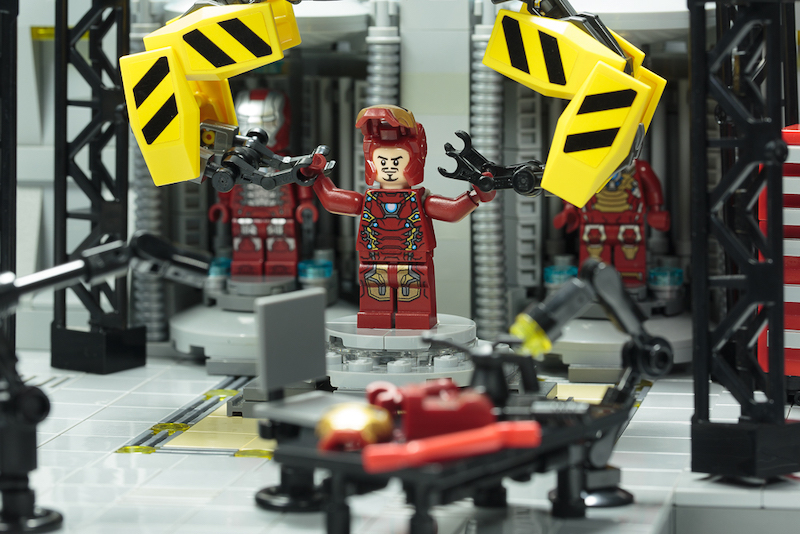 In the more recent movies, the Iron Man suits can remove themselves, but in early films a variety of mechanical units did the job. The earliest consisted of arms suspended from above.

This collection of builds combines to create the visual backdrop to Brick Fanatics Magazine Issue 6’s in-depth retrospective celebrating 11 years of Marvel movies and seven years of LEGO Marvel sets featuring Iron Man. For the full feature, pick up a copy of Issue 6, available worldwide online, in stores in the UK now and in the US from July 11.