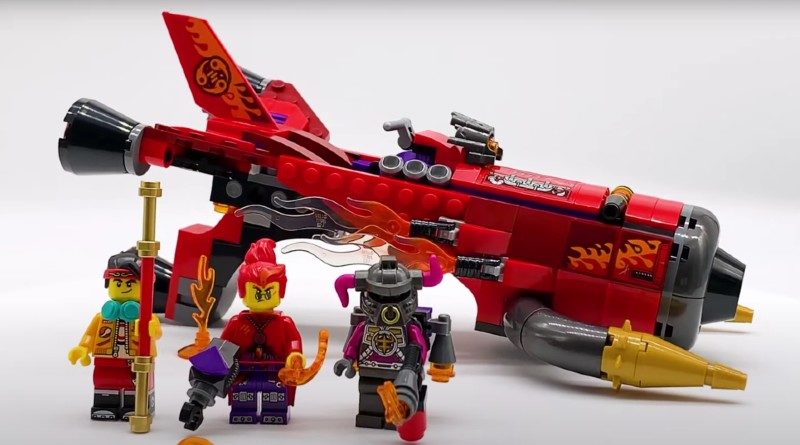 One of the LEGO Monkie Kid 2021 sets is harking back to the theme’s roots in a battle between the Demon bull King and Monkie Kid, with a closer look granted by an early review.

Bricks by Mind has received the new range of Monkie Kid sets thanks to the LEGO Group and has reviewed the entire range, giving us an early look at what to expect before the release.

Rounding out the first looks is 80019 Red Son’s Inferno Jet and is one of just two sets in the wave to not feature any of the new spider villains. Instead, this model brings back the familiar battle between Bull clones and Monkie Kid, alongside two builds.

The most obvious build of the set is the inferno jet of which the model shares its namesake. This particular vehicle is long, and has a fiery red paint job, with flame decals to match the personality of Red Son. Notably, the set is meant to be held as if it was a blaster and can even fire out two missiles, something that the YouTuber notes is similar to NINJAGO’s 71736 Boulder Blaster.

Aside from the jet, a small mountain build is included with a bonsai tree and waterfall, while it may seem like nothing special, it might work well alongside 80024 The Legendary Flower Fruit Mountain. An inverted stud connection allows Monkie Kid to be displayed in a variety of acrobatic poses with the staff, while underneath the waterfall a curious frog watches the battle.

“I know price should not be the only determining factor when buying this set but I just feel there’s no reason to get this over the boulder blaster.” said Bricks by Mind, sharing his final thoughts on the model. There does seem to be a comparison to be made between the Monkie Kid and NINJAGO sets, in both play feature and price, but this is a more accessible way to get Red Son following the first year of the theme.

Either way, LEGO Monkie Kid 80019 Red son’s Inferno Jet will launch very soon on March 1 along with the rest of the theme’s 2021 wave.