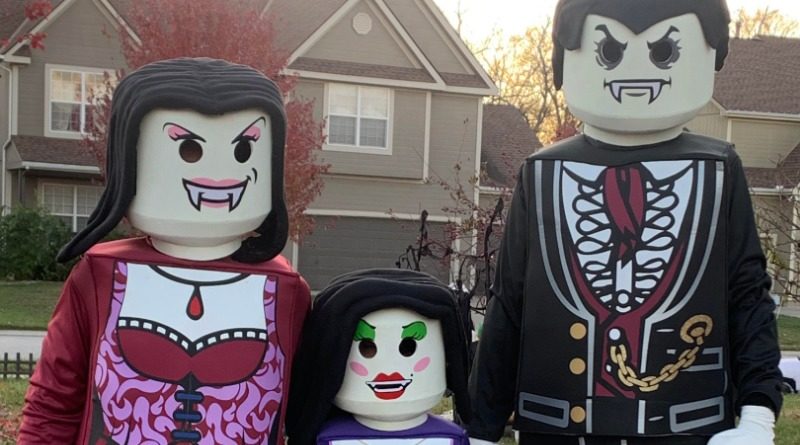 LEGO fans have been showing off their minifigure costumes for Halloween, and the results are pretty incredible.

Dressing up as a minifigure is easy on paper. After all, they’re technically just tiny, plastic representations of real people. Bringing it full circle by grabbing construction overalls and saying you’re Emmet is an easy, if not hugely exciting, win. But for some LEGO fans, that’s just not enough. If you want to go as a LEGO minifigure for Halloween, you need to go as a minifigure.

Without the kind of horrific plastic surgery reserved solely for the most depraved horror films, though, you might have a hard time manipulating your body into minifigures’ weird plastic proportions. The solution? Just build an oversized costume around yourself. That’s what this family did, anyway, and you can’t really argue with the results.

Hardcore LEGO fans will probably recognise these costumes from the long-retired Monster Fighters theme’s 9468 Vampyre Castle. Or the parents’ outfits, anyway – we’re not sure a vampire child is really within the LEGO Group’s wheelhouse. Either way, it’s the kind of deep cut that earns you lots and lots of internet points, which – as we all know – is the only currency that really matters.

According to redditor BabyMonster13, who originally posted these pics, the costumes were the result of an intense month of sewing and crafting. And while vampire dad looks unnervingly like what might happen if you melted a minifigure and stretched it to really rather unreasonable lengths, you can’t deny their hard work has paid off.

Fellow reddit user pathartl took a slightly different approach to their Halloween costume, meanwhile, swapping out sewing for 3D printing. But the result is no less impressive, and has possibly even awakened something in us. Something like, for instance, a sudden desire to buy a 3D printer and start rattling out every single minifigure accessory imaginable. Don’t try to convince us you don’t want a huge LEGO megaphone, because we just won’t believe you.

Finally, for something a little more kitsch – and probably closer to what we could actually manage – check out redditor Rinopotamus‘s childhood Halloween costume from the heady days of 2007. (Do you feel old yet?) It’s equal amounts charming and terrifying, in the sense that you can probably tell it’s supposed to be a LEGO minifigure, but if you saw it stumbling in your direction you wouldn’t hang around to make sure.