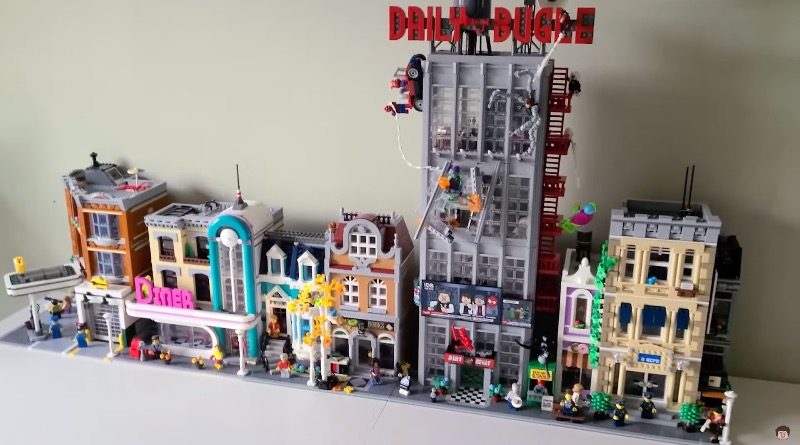 The newly-revealed LEGO Marvel 76178 Daily Bugle has connection points for other modular buildings – so how does this towering concrete block fit in with 10278 Police Station and 71741 NINJAGO City Gardens?

That’s the question posed by YouTuber Ashnflash, who has combined his review copy of 76178 Daily Bugle with all three other modular-compatible sets released in 2021, and every entry in the Modular Buildings Collection since 2018’s 10260 Downtown Diner.

The video kicks off by placing the huge Marvel set between 71741 NINJAGO City Gardens and 10278 Police Station, with 80107 Spring Lantern Festival – also compatible with the rest by dint of its 1×2 bricks with Technic holes, the pieces that allow all these sets to connect – placed on the end of the sprawling street scene.

As you might expect, there’s a real disparity in height between most of those sets, although 71741 NINJAGO City Gardens comes close to 76178 Daily Bugle’s mammoth 82cm in height. In fact, it’s really only the Bugle’s antenna that gives it the edge – in building height alone, the Gardens actually takes the crown.

Unfortunately, the waterbed at the base of 71741 NINJAGO City Gardens means it doesn’t really fit aesthetically with 76178 Daily Bugle as both sets come out of the box, even if they are the closest match in height. The Marvel model’s 2×2 dark grey tiles do allow it to sit in harmony with 10278 Police Station, though – and the rest of the recent Modular Buildings Collection sets.

Case in point, Ashnflash next lines up 76178 Daily Bugle alongside 10278 Police Station, 10270 Bookshop, 10260 Downtown Diner and 10264 Corner Garage. And while the superhero set dwarfs all its contemporaries by some margin – creating that effect of a ‘1960s concrete box’ next to Jamie Berard’s ‘beautiful modular buildings’, as designer Mark Stafford put it – they at least match in aesthetics around the base.

Whether the Bugle’s immense height will preclude you from placing it straight into a modular building setup is entirely subjective, but those fans with supersized versions of 10255 Assembly Square, 10224 Town Hall and so on may find it fits a little better. Of course, 76178 Daily Bugle could also just be the start of a brand new skyscraper district in your wider LEGO city layout…

For more on the biggest Marvel set to date, check out our full image gallery and find out why it’s designer Mark Stafford’s dream LEGO model.