James Bond is intrinsically linked with London. One of the overarching traits of Ian Fleming’s secret agent is his dedication to Britain; to Queen and country. But the capital is particularly important to 007, as it is the base of operations for MI6. From the exhilarating opening of The World Is Not Enough or the underground chase in Skyfall, audiences have seen the cinematic secret agent in the capital many times over the years. So holding the launch for the LEGO Creator Expert [geot exclude_country=”United States”]10262 James Bond Aston Martin DB5[/geot][geot country=”United States”]10262 James Bond Aston Martin DB5[/geot] at the LEGO Store Leicester Square makes perfect sense.

It is a great setting to be speaking to the people responsible for bringing the set to life, as they seem very aware that this special event is taking place in a special setting, visibly excited to be launching this product – and perhaps a little relieved to no longer have to speak about the set in hushed tones behind closed doors, as discretely as Bond himself might have to be when discussing state secrets.

To get the background to this set, Brick Fanatics speaks to Stéphane Knapp, the Vice President of Marketing at LEGO Retail. “You probably know that in the Creator Expert line we have a lot of iconic models,” he explains. “We appeal to a lot of kidults – adults who love to escape by building our cars. Looking at all the iconic cars in the world, the Aston Martin DB5 was one of those at the top of the list. We started to talk to those guys, they have a bit of passion, so we started working together maybe two years ago.”

Once it was agreed that the Aston Martin DB5 would be getting the LEGO treatment, the further collaboration with the studio behind James Bond became almost inevitable. “James Bond came because this car is so iconic. We were talking to both Aston Martin and Eon to see how we can get this fantastic car. We were excited for all of the functionalities we can put into this car, which will be a great building experience too.”

It has not gone unnoticed by LEGO fans that considering the company’s historic aversion to overt violence, James Bond could be perceived as being problematic for a link-up. While many of the films have a slightly campy feel, others show the spy assassinating enemies. “We talked about this,” Stéphane confirms. “It was of course a discussion. Then we focused a lot on the car itself. It’s a car from the 1950s, so it’s also related to some old memories. There is no violence in this set, it is just good nostalgia for a fantastic, iconic car. So that’s why we said, ‘yes, let’s go, for sure’.”

With the background to this brick based mission ascertained, it is time to understand how it was executed. Brick Fanatics sits down with design experts from both the LEGO Group and Aston Martin to get a first-hand account of how the set went from the idea phase to the finished model that sits before us.

Continuing with the burning questions on fans’ minds, Brick Fanatics asks about the reason that a James Bond minifigure was not included in the set. “In our product line, Creator Expert, we have never done that,” says Michael Psiaki, the LEGO Senior Model Designer who put the set together, says. “We just thought we should stick with what we’ve done in the past – we focus on the car, it’s about the authenticity of the model. As soon as we start to include a minifigure, it kind of muddies the message that we want to put out. I could be wrong, but I don’t think you’ll ever see a minifigure in our Creator Expert cars line.”

“Now they’ve said that though, I want a James Bond keyring,” laughs Miles Nurnberger, Director of Design for Aston Martin. 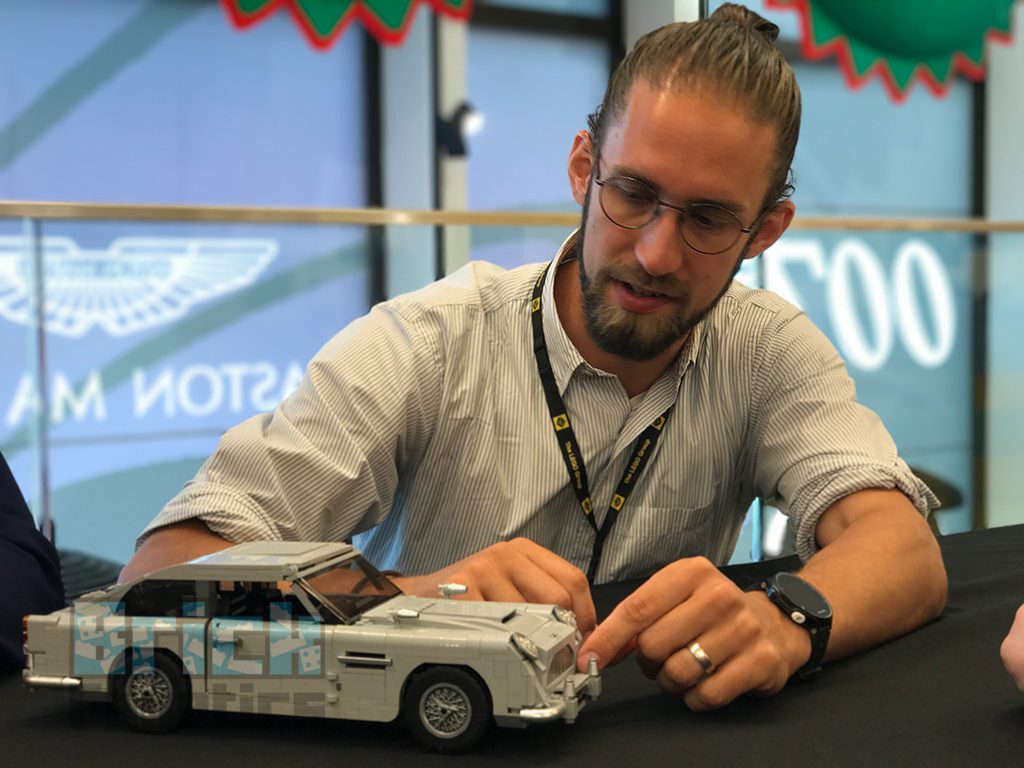 So many of the gadgets that the DB5 is famous for are included in the set – the tyre slashers, the bullet proof shield, the hidden machine guns, rotating licence plate – and of course, the ejector seat. It begs the question, is there anything that Michael had hoped to include, but couldn’t squeeze into the car’s chassis?

“I joke about the oil slick, we couldn’t get that in,” he smiles. “When we first talked about it, the first thing everyone said was, ‘ejector seat’. We must have the ejector seat, so we figured that out. The one for me that I really wanted to have was these machine guns. It’s not even a major feature, I don’t know that he uses them that often, but it’s just so cool, the idea of those being hidden in there.

“Then of course the rotating number plates. I don’t care what we have to do, we have to make this work somehow, so we have the display in here that can rotate. If we could get anything else it in at that point, it would be fun, but those three must be there.”

Aston Martin was a constant presence in the design process, with the LEGO team liaising with the team there to ensure that the model would be accurate. “A lot of it was about details,” Miles confirms. “You know the iconic details, the shape of the grille, how it’s perceived, we went back and forwards on how much shape we can get on fenders. How we do the sides straight, how the bumpers look, how the number plates integrate.

“We have a lot of our… I’ll call them historians, or experts. There is still an amazing amount of knowledge of the past held within the company, so it’s things like the shape of the rear lamps. Between a BD4, a DB5 and a DB6, the connoisseurs out there can spot one just by seeing the top corner of a lamp. So it’s that sort of detail, that it’s round and it’s not a church spire on the back, things like this that let you know which car it is. So a lot of those details we went backwards and forwards on.” 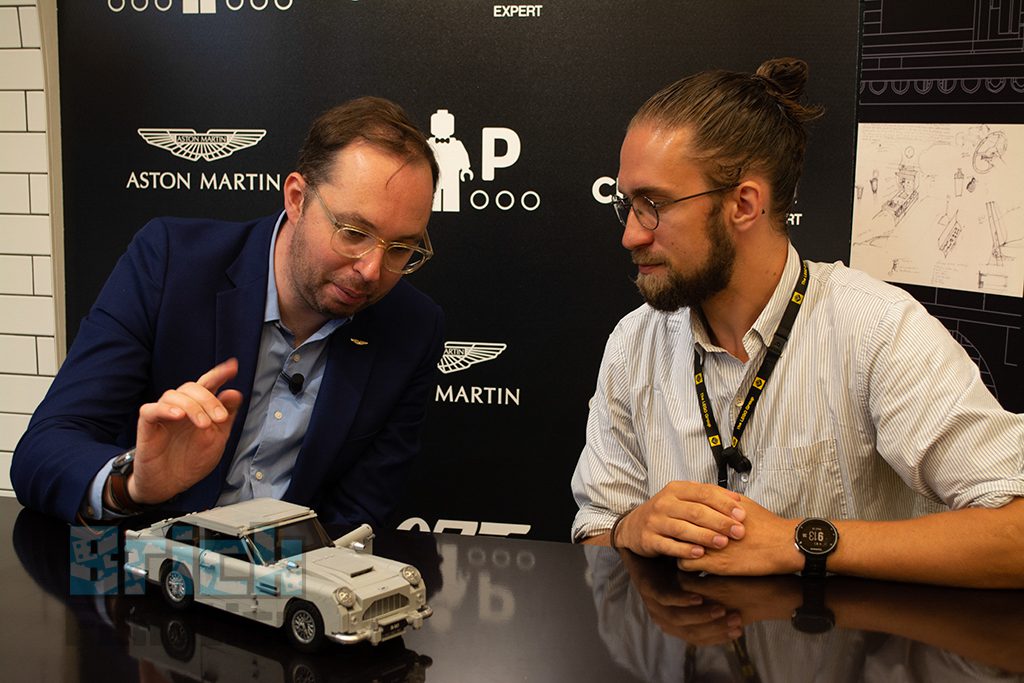 Picking up our chat with Stéphane, we acknowledge the amount of fanfare that is accompanying this particular release. “It’s a great occasion, we are in London. Let’s celebrate this partnership here and let’s push this model a bit differently. We are talking to people who are very sensitive to this type of communication. So we’re not doing a classic TV advert and so on, you see a lot of people know the brand here. So how we can offer a bit of a fun for the fans of the brand? That’s why we are doing this here today.”

Fun it is – with the interviews concluded, now fans can meet the team behind the set for themselves, and have the box autographed. With customers heading to the checkout to make payment and actually own 10262 James Bond Aston Martin DB5, it seems that the LEGO Group’s mission has been accomplished.