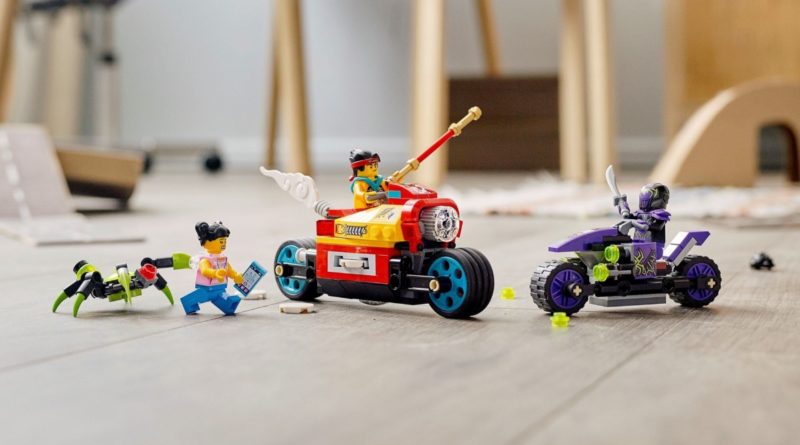 It’s all change for LEGO Monkie Kid, Technic and VIDIYO in our latest update of every single set retiring by the end of 2021.

While plenty of Technic and VIDIYO sets have been pushed back to at least 2022 since our last update in August, one recently-released Monkie Kid model will no longer make it into the new year – at least according to Brick Fanatics’ sources.

Scroll down to find out more about those individual themes, and check out the full list of LEGO sets due to leave shelves by the end of this year. As the changes even across the past month demonstrate, these dates aren’t necessarily set in stone, but they’re still useful for planning your purchases over the next few months.

That said, if any of these retiring sets survive on shelves into November, it’s likely that we’ll see at least some of them on offer over the course of LEGO VIP Weekend, Black Friday and Cyber Monday – but there’s no guarantee that they won’t sell out before those shopping events, so don’t bank on it if there’s something you’re desperate to grab before it retires.

LEGO Star Wars will be waving goodbye to quite a few sets this year, with one of the stand-outs being 75275 A-wing Starfighter, an Ultimate Collector Series model that will be leaving the LEGO Group’s catalogue early compared to other UCS sets.

Elsewhere in the list, the two LEGO Star Wars Brick Sketches will be retiring this year following the usual 18 months on shelves that most sets last for. Anyone wanting to pick up either 40431 BB-8 or 40391 First Order Stormtrooper will want to do so soon before time runs out.

In terms of retiring LEGO Ideas sets, the re-released 92177 Ship in a Bottle will be leaving digital and physical shelves by the end of the year, and unless the LEGO Group plans to launch this model for the third time this is likely the last chance to add it to your collection.

Otherwise, the popular 21322 Pirates of Barracuda Bay is retiring by the end of the year as the second ship-themed set on the list. Those hoping to get the updated minfigures for Captain Redbeard and his crew might want to act fast before the Black Seas Barracuda has a chance to set sail.

Quite a few sets in LEGO Marvel are retiring by the end of the year, including the annual collection of mech-based models, which sometimes include a rare minifigure or two.

Outside of the minifigure-scale models, a selection of the more unique Marvel offerings will retire soon too. This includes LEGO Art 31199 Marvel Studios Iron Man and even 76165 Iron Man Helmet. Collectors of the LEGO Group’s multi-theme spanning Helmet Collection might be especially interested in the latter build.

Time is running out to order quite a few LEGO Harry Potter sets as even one of the theme’s relatively recent minifigure accessory packs, 40419 Hogwarts Students Accessory Set, is disapparating away for good.

Where will 40419 Hogwarts Students Accessory Set apparate to? Only the other retired models in the theme will know for sure as one of the LEGO Group’s last 2018 builds is due to retire by the end of the year. You’ll find a full list of sets leaving shelves by December 31, 2021 below:

It’s time to get technical as a decent amount of LEGO Technic sets are currently due to retire by the end of the year, notably including plenty of the smaller complex creations that Technic has become known for. The likes of 42102 Mini CLAAS XERION and 42103 Dragster are up for retirement, so don’t miss out if you’ve been itching for a cheap but challenging build.

On the other hand, 42107 Ducati Panigale V4 R and 42116 Skid Steer Loader – both originally scheduled to retire this year – will now apparently survive into 2022, so you’ve got a little more time pick those two up.

LEGO retirement has been made a little bit sweeter with another excuse to buy 10267 Gingerbread House, the LEGO Group’s 2019 entry in the ongoing Winter Village Collection.

Already own the set? Your bank account might not be safe yet as six other large sets are retiring by the end of the year, including the gadget-filled 10262 James Bond Aston Martin DB5 and thrilling 10261 Roller Coaster.

Architects, budding or otherwise, will be interested to hear that five of the LEGO Group’s building-based collection of microscale sets will no longer be available after December.

These include two of the Skylines subtheme in 21043 San Francisco and 21052 Dubai as well as the huge 21046 Empire State Building – not a bad gift if you’re itching to visit the New York flagship LEGO store but are unable to at this time.

As NINJAGO prepares to continue the ever-expanding narrative for another year, it’s time to wave goodbye to an older wave of sets with much of the Master of the Mountain range currently scheduled to retire by the end of the year. This board-game-inspired subtheme includes some unique models, such as the skeletal 71721 Skull Sorcerer’s Dragon.

Minifigure collectors may also want to keep an eye out for 40374 Golden Zane MF Acc. Set as the exclusive Golden Zane won’t be available for much longer.

Holy retirement, Batman! Nine LEGO DC sets celebrating the heroes from the comics and beyond – including the iconic Caped Crusader – are leaving shelves soon.

This includes the two Batman Brick Sketches, 40386 Batman and 40428 The Joker, as well as the colossal 76139 1989 Batmobile. Anyone hoping to collect the entire range of big LEGO Batmobiles, such as the upcoming 76240 Batmobile Tumbler, need to act fast as the stock has been intermittent for the 1989 variant.

LEGO Super Mario is losing a few members of the Mushroom Kingdom by the end of December as many exclusive brick-built characters, and their corresponding sets, are up for retirement.

From Bowser himself in 71369 Bowser’s Castle Boss Battle Expansion Set to Toad and Toadette in 71368 Toad’s Treasure Hunt Expansion Set, time is running short for these 17 LEGO sets.

Although LEGO Creator is rumoured to be reviving a retro LEGO theme in early 2022, let’s not forget about the creative creations that the designers have brought to the theme in the past, such as these eight that will be leaving shelves soon.

Among the range of retiring Creator models is the especially unique 31104 Monster Burger Truck, and don’t forget that every set in the theme features options for three different builds.

Speed Champions will be watching a relatively small total of five sets leaving the vehicular theme by the end of 2021, including but not limited to the long-named 76898 Formula E Panasonic Jaguar Racing GEN2 car & Jaguar I-PACE eTROPHY and 76899 Lamborghini Urus ST-X & Lamborghini Huracán Super Trofeo EVO.

The theme is home to some exclusive partnerships with car manufacturers and collectors of Speed Champions might not want to miss the retirement of the only LEGO Nissan model so far, 76896 Nissan GT-R NISMO.

The house of mouse has become a popular subject for the LEGO Group, with a wide variety of characters and franchises all falling under the Disney banner. Whether you’re fond of Cars, newer releases such as Raya and the Last Dragon or modern classics like Frozen, there’s a retiring set to suit every taste.

Even theme park fans have something to tempt them with 71044 Disney Train and Station, based on the original Disneyland icon, leaving shelves by December 31.

Life isn’t finding a way for five Jurassic World sets as their days in the LEGO Group’s catalogue of available sets appear to be numbered. LEGO Jurassic World is home to a range of specialised pieces for the various prehistoric species of the fictional park, and such bricks can be valuable on the aftermarket.

Among the retiring models is 75941 Indominus Rex vs. Ankylosaurus, which features both the rare Indominous Rex and the exclusive, and first of their kind, Ankylosaurus. Add to that a full gyrosphere station and it’s not a bad start to a minifigure-scale Jurassic World.

Part of the legend of the Monkie Kid is about to end as many of the theme’s first wave of models are due to retire by the end of the year, and one newer build has even crept into the category over the last month.

Still up for retirement is the only Stranger Things model to have been released under the Netflix partnership. There are few LEGO sets as creative as this one, which sees the model mirrored and displayed upside down – a fitting method considering the name of the otherworldly dimension of the same name.

Even the evergreen LEGO CITY theme needs to make room on shelves for even more products coming soon, such as the new Stuntz subtheme. Sit tight and get ready for a hefty list of retiring sets, including some unique offerings such as 60258 Tuning Workshop.

LEGO VIDIYO may be cancelled, but it seems that the LEGO Group isn’t planning on retiring the majority of the musical models just yet as now only 43101 Bandmates is scheduled to become unavailable by the end of the year. The entirety of the theme’s BeatBox sets will seemingly continue in production for another year.

Four of the older LEGO Art sets are currently up for retirement in 2021, with the entire first wave of the display-centric models leaving digital and physical storefronts. This includes licensed artworks such as 31200 Star Wars The Sith and iconic builds in 31197 Andy Warhol’s Marilyn Monroe.

Heartlake City may be one of the most diverse locations ever dreamt up, with everything from a shopping mall to a tropical jungle of varying climates all packed into one place and theme.

LEGO Friends will be waving goodbye to a lot of its older builds by the end of the year with a staggering number up for retirement. You can find a full list below.

LEGO BrickHeadz may not be releasing quite as many sets as it used to, but the theme continues to prove a clever method for the LEGO designers to flex their creative muscles in some affordable and iconic sets.

Sixteen sets are leaving shelves by the end of the year, including the brand new 40492 La Catrina as the first set specifically themed to the Mexican Day of the Dead holiday. Even the limited NINJAGO anniversary model – 40490 NINJAGO 10 – is retiring almost as soon as it debuted.

There’s not much time left to DOT your world – at least not with these retiring LEGO DOTS models as the crafty kits will be making way for whatever comes next for the theme.

Retiring by December 31 are many of the theme’s previous offerings, including almost all of the smaller bag tag sets and one series of the individual bags of printed and coloured tiles, each featuring a uniquely themed collection of designs.

LEGO Minecraft is about to watch eight of its previous sets log out of the theme for the last time, including the first model to be based on the Minecraft Dungeons spin-off title.

21163 The Redstone Battle features an assortment of unique blocky weaponry and characters based on the game, but is about to be replaced entirely by 21176 The Jungle Abomination. Act fast if you’ve had your eye on the two Redstone Golems.

Unchanging this month is LEGO Minions, which is still seeing only one set retire before the corresponding Minions: The Rise of Gru movie even has a chance to release in cinemas or streaming.

While 75549 Unstoppable Bike Chase is possibly the first theatrical LEGO set to retire before the accompanying film premieres, the rest of the LEGO Minions sets will continue until the end of 2022, by which time Minions: The Rise of Gru will have finally debuted in cinemas.

One thought on “Every LEGO set retiring in 2021 – September update”