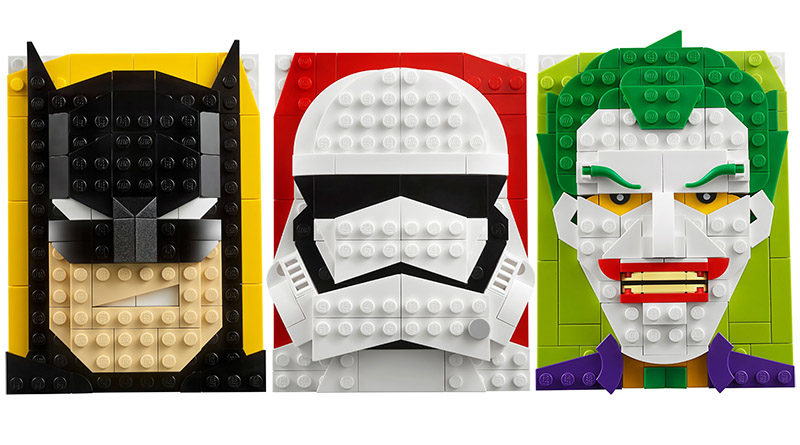 The LEGO Group is pushing the boundaries of what a set can be – and the new LEGO Brick Sketches theme is a great example of that. Small builds depicting pop culture characters in a more two-dimensional way will offer fans a new way of building.

LEGO Model Designer Chris McVeigh pitched his unique building style to his new employer and had it approved. In this exclusive interview, he explains to Brick Fanatics how he took his concept and developed it into an official product.

What other considerations were there when developing the theme?

If you followed me before you may know that I had a standard for what Brick Sketches were. So they were 12 bricks wide by 16 bricks tall and part of the challenge for Brick Sketches for me was always how much detail can I actually get into these little things? How can I use parts in interesting and clever ways to make something have a lot more detail than if you were maybe just doing a mosaic type thing? The front facing characters, that was also locked down by the time I had done a bunch of them outside the company.

When I got inside the company, you look at these things and think what does this mean as a LEGO product? What can we do with it? How can we decide different parameters for it and make sure we stick to those from Brick Sketch to Brick Sketch, so one of the things that we decided early on was the backgrounds would remain with the cut corners because that was part of the DNA of Brick Sketches.

We would also actually make most of the background colour into tiles instead of studs, so we varied the amount of studs visible on the Brick Sketches a little bit. I think it allows it to bring more focus to the characters themselves, instead of having some of the shadow detail that you might see on the studs in the background.

We also decided that as far as possible we would standardise the width of a character’s head to 10 bricks wide and that was a bit different. You may have noticed that prompted a redesign of Batman because previous Batmans I had done were always eight bricks wide. Already there is an exception with BB-8, BB-8 has an eight brick wide head.

Then the last thing was what do these mean as products, how do people display them? One of the things when I was developing Brick Sketches on my own was that they were just on four 4×12 plates, then after I photographed them I would add a little background frame to them and this was so that you could hang them on the wall and just give some weight to them as well. I developed a combination hanging point as well as a kickstand so you can either display them on your desk or if you want you can hang them on the wall with a nail.

So those were the three main things that we fine tuned before we really went forward with the development of the sketches.

What was it like designing the Brick Sketches in a way that can be communicated through building instructions?

Because I used to develop my own fan models outside of the company I had been doing my own building guides for quite some time. The initial Brick Sketches were just, ‘I’m going to layer stuff up, doesn’t matter what colour’s on the inside,’ because I wasn’t thinking of it from a consumer perspective or a buildability perspective. As I started doing my own building guides outside the company, I would think, ‘no, I’ve got to make this easier for somebody to understand,’ and it just became natural.

When I got into the company, this is a primary focus, we really want people to have a good building experience. So that means sometimes looking at the model and seeing where you can improve things, where you can bring a little bit of fun to the building process, when otherwise it could just be a sandwich of grey plates. Thankfully before I got into the company I had already started to be in that mindset.

It’s a fun challenge. I always find it a bit of a game really, how can we make this really fun for people to build? How can we bury things? How can we introduce interesting parts that make people like, ‘oh wow’. I am always looking for those moments and I hope that those are something people will find in Brick Sketches.

Did you ever consider doing non-licensed Brick Sketches?

It wasn’t something that was discussed. I think these types of things are always under consideration, but at first it was about what IPs [intellectual properties] are a good match, let’s see what we can do with those. There wasn’t any real discussion about non licensed stuff or non IP stuff.