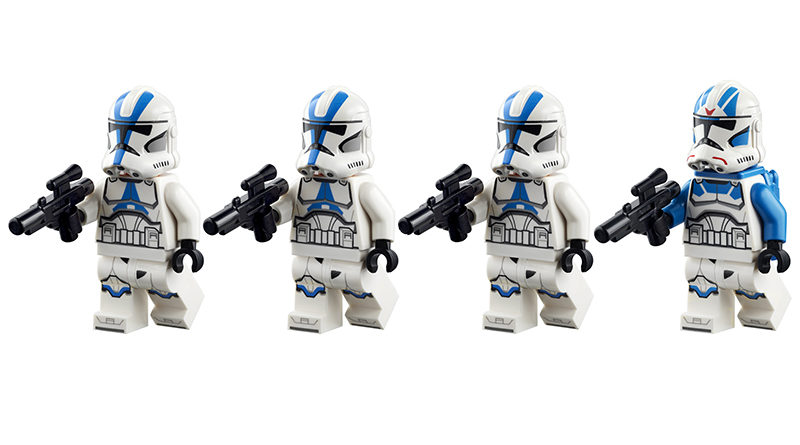 “You asked for it. We’ve built it,” the LEGO Group declared earlier this year, when a fan campaign for the release of 75280 501st Legion Clone Troopers succeeded. Social media users took every opportunity to let the LEGO Group know how much they wanted a 501st Clone Trooper Battle Pack. It turned out that the LEGO Star Wars design team was listening, with the set scheduled for release on August 1.

Was 75280 501st Legion Clone Troopers in development already or was it purely a reaction to fan demand?

Jens: [laughter] To be quite honest, the reason this is here now is totally because of fan request.

Michael: And I think the idea has been in the air, we would hear about it every once in a while. There was definitely this huge push to do this and the timing was right, we thought, ‘yeah, let’s go for it’.

We have also been asked a couple of times today about whether this is opening the door for if you shout loud enough you can get whatever you want. That’s not necessarily the case. There is a unique story around the 501st, how it started – we meet these people when we are out at different events and they are extremely passionate and dedicated towards Star Wars and the charities that they support. It really motivated us to lean into this idea because we think it is all around a wonderful story, the fact their story has become cannon in the Star Wars universe, so that’s a really good thing to get behind.

Jens: I also think we are listening directly. We are following fan forums and want to make people happy, we want to bring out what people want.

Another thing that is super interesting was the poll we had about the next UCS product. We were super excited about it and it was a little bit of a surprising result, but we are really happy about it and it was interesting to see the result. More than 40,000 people responded, that’s the biggest reply as far as I know to any poll at LEGO. We are clear that there is a huge interest and people like to be involved so it’s great.

Some of the early Clone Troopers inspired by Revenge of the Sith didn’t end up matching the movie. What reference did you use for this set?

Jens: This is based on reference from The Clone Wars, that’s where the Rocket Trooper was introduced of course with the jet pack. Usually what we are getting are renders, and they are pretty accurate, it is very rare that something changes.

So these are specifically based on the recent The Clone Wars episodes?

Jens: Yes they are.

How did you choose the vehicles in the set?

J: It wasn’t that hard because that’s just what you associate with them. I know that a lot of people are calling this the 501st battle pack. A you know this is a bigger set and that was because we were talking about it and realised it would be nice to have both vehicles. That also gave us the opportunity to bring in more figures with this set. So it’s an oversized battle pack.

This set covers Star Wars: The Clone Wars, which launched just a few months after The Rise of Skywalker and The Mandalorian. How do you decide which projects to focus on?

Jens: When we decide what content from Lucas-Disney to lean into in with our products it is something we do in close co-operation with them. We are discussing what would make most sense. It’s a bit of a challenge because sometimes it is hard to predict – like with The Mandalorian, nobody could foresee how successful that would be.

So it’s always very difficult, but typically we are always having some classic LEGO Star Wars in the assortment, that will always be there, then there is a certain part of the assortment that has to lean in on new content. But it’s not like we are leaning on 10 different things, we are trying to focus a little bit also so that models are connected.

The Star Wars universe now is so huge, there is so much and so many options. We focused on The Mandalorian which totally makes sense, but no-one knows what it is going to happen in the future, we have also seen The Clone Wars having a very successful new season. There is so much that yeah, could work for us.

Michael: There is nothing that’s off limits as such, we can do whatever we think will be interesting for the fans and also reflects what’s going on for Lucas-Disney.

Jens: One thing we are aware of is that we were a bit cautious about leaning into a Star Wars computer game that was age marked 18+… it was a little bit weird if we made make toys for six year olds. Now we have a much more diverse portfolio of products with some specifically targeted at adults – every door is open basically.