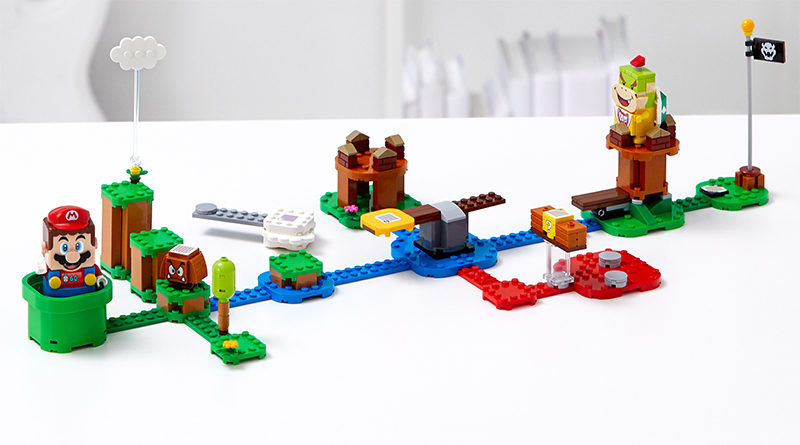 When it comes to the LEGO Super Mario sets that will launch in August, there is one questions on everyone’s mind – how does a digital gameplay experience work in the real world?

Mario time! Well, not yet, but it will be soon. On August 1, the LEGO Group will launch LEGO Super Mario, which promises to take the classic Nintendo gameplay experience and place it in the real world. Fans will build their own levels then take LEGO Mario on a coin-collecting adventure, jumping from platform to platform and defeating the bad guys.

Given the limited footage of the game in action that has been released so far, Brick Fanatics took the opportunity to ask Digital Design Lead Jonathan Bennink and Marketing Director Christian Munk how it all works.

Could you explain how the gameplay works?

Christian: You can do good or great.

Jonathan: You can totally cheat by saying I go to start and I go to finish, then I have beaten the level. It’s different in that sense from a normal Mario game, but you also get zero coins of course. The challenge is intrinsic, you have to decide, like in Super Mario Maker, I want to make a level that has a lot of platforms with a lot of fire underneath and see how Mario does there.

The gameplay works by putting together a level that you think is cool, you place him at start and you get a timer that counts down, now you get coins from walking on the LEGO bricks. You also get coins from walking on any surface but the LEGO bricks get more coins. There are blocks you can manipulate, so there’s the Question Mark, I got a 10 coin bonus, you can try it again and get something else, there’s also a mushroom in there and extra time.

I am almost running out of time here, 15 seconds left, I just take out the Goomba, then I hit the finish. If I hit the finish just in the right time I get a coin bonus, but these are kind of hidden features, that we don’t necessarily say but they are in there. How did I do? 38. That’s not too good. But you get the idea.

So finding the hidden features extends the gameplay and encourages replay?

Jonathan: It’s about exploration and trying things out, there are three or four different kinds of bonus you can get at the finish if you do certain things or finish in the right time. There are different ways to defeat the enemies that will get you different amounts of coins, but I think all in all we tried to stimulate variety in play. The more different things you do the better.

You can totally spam the Goomba and keep hitting it if you think that’s fun, we don’t want to take away those kind of things, but we also don’t want to stimulate it too much. There’s a coin cap that you reach at one point.

Christian: This is the starter set alone that Jonathan has shown right now. But everything you have in between the start and the finish line is a level, you can expand it yourself. You can go as crazy as you want with your own bricks. In the expansion sets that we have more ways of collecting coins and the gameplay that you have becomes even more challenging.

It’s basically up to you how crazy, wacky and creative your level should be. Of course if you can use the stairwell at home and make a three metre long sliding function that would be awesome, so it’s your creativity that sets the limit of what you put in between the start and the finish.

Jonathan: This is the Goomba, which is a normal enemy who you just defeat by jumping, but this is the ghost, and Mario is afraid of him, so you can’t actually defeat him. You have to find out a way to defeat him, so that’s another one of those little secrets.

Then we have the Piranha Slider here, probably one of the better examples of what it is like to bring a video game to the real world with LEGO bricks. Again we have the platform with the action brick and then now I put Mario on, the music starts and I collect coins by going from left to right and if I hit the plants, Mario says ‘oof’ and you lose one second where Mario can’t collect coins. At one point we had that you lose a coin here, but then we ended up with kids who had minus 15 coins at the finish and they were almost crying, so this is an example of being right and more right.