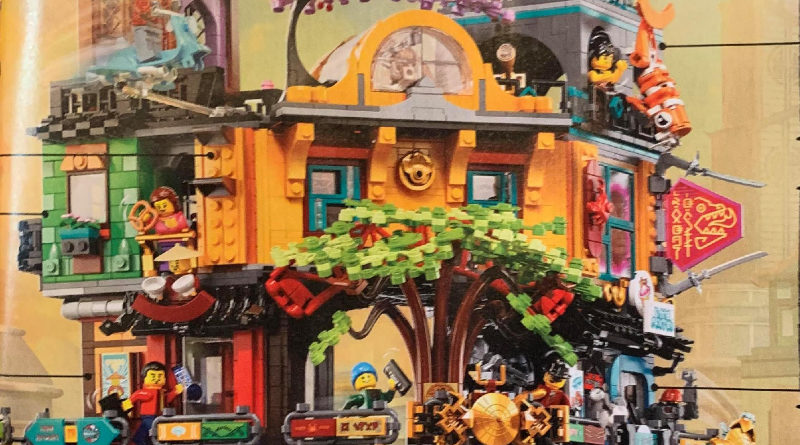 The first images of 71741 NINJAGO City Gardens have been found, giving fans a first look at the second expansion to NINJAGO City.

71741 NINJAGO City Gardens has been revealed in new images from a Canadian catalogue. This 5,685 piece set celebrates 10 years of LEGO NINJAGO with three tiers of references for fans to find.

The images were first posted to the Brickset members Facebook group along with pictures of other incoming sets for the Marvel Eternals movie. The 70620 NINJAGO City expansion features 20 minifigures, including characters direct from the TV series that are getting a figure for the first time.

71741 NINJAGO City Gardens features three tiers of the city, matching the design of the initial LEGO NINJAGO Movie set. However, since this set is themed to the TV show rather than the movie, it includes more specific references to moments from the show.

Included in the city are a tall ninja control tower, student apartments, NINJAGO history museum, Chen’s noodle house and a park featuring a shrine. A mini model of Destiny’s Bounty is one of the many references in this set, some of which come from the included minifigures.

Out of the 20 Minifigures, one of which is a limited edition Legacy version of Sensei Wu to match the rest of the 2021 anniversary minifigures, certain characters get new minifigures while another gets their very first. Ronin, Misako, and Clutch Powers all return for this set while The Mechanic gets his first figure.

This set will release January 14 for LEGO VIP Members with a wide release for everyone else on February 1. The price will be $399.99 CAD but there is no word of pricing in other regions yet.