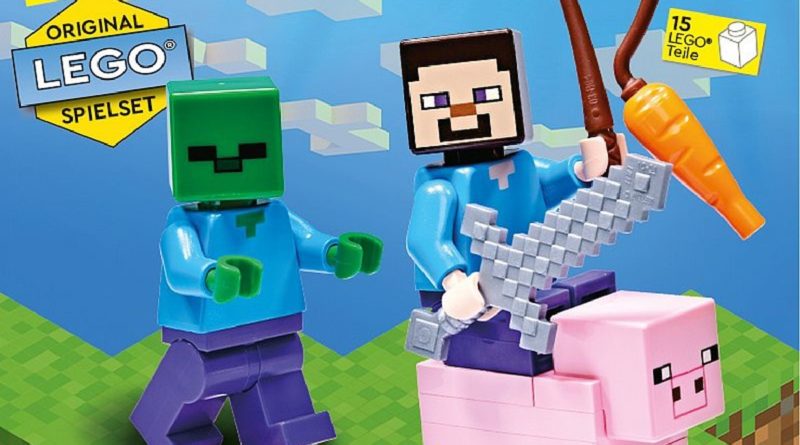 The first LEGO Minecraft magazine has landed in stores with a free pair of minifigures based on the game, as well as an extra buildable pig.

Following its inclusion in a survey for feedback on LEGO magazines released last year, a new LEGO Minecraft publication has been launched in the UK and Europe with evidence that it may be the first of an ongoing series.

The image below is indicative of the german version, there are likely to be very few differences between regions, including in the UK where the initial issue is available in newsagents and supermarkets. It includes posters, comics and puzzles as well as a small brick-built gift.

Matching the content of other LEGO magazines, a minifigure of Steve, a Zombie and a pig are included as well as a sword and fishing rod as accessories. A peek at the included comic suggests that the featured minifigures may be based on the events of the story.

The top left of the magazine suggests that this will be the first issue of the new series, with the journal also named as the premier iteration in a press release provided by Blue Ocean Entertainment.

For those who want more LEGO Minecraft, the theme’s 2022 range of sets have just launched on the official online store featuring brand new creatures from recent updates such as Axolotls in 21180 The Guardian Battle.