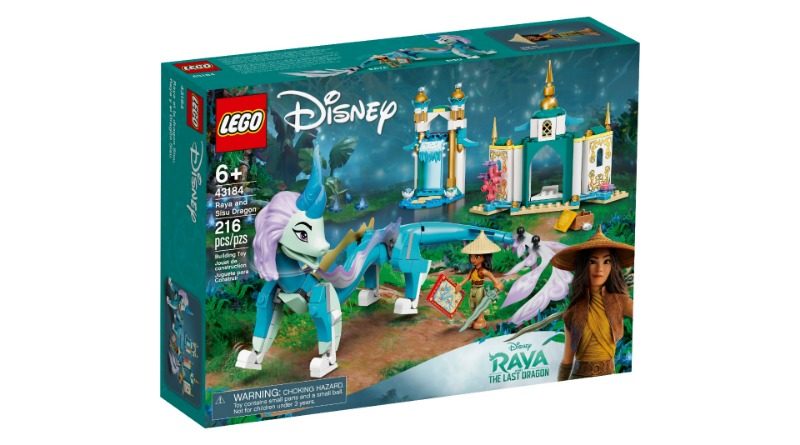 The LEGO Raya and the Last Dragon sets are starting to appear in the wild, with one YouTuber bringing a review of 43184 Raya and Sisu Dragon, giving a much better look at the titular set.

JBBrickFanatic has found the new collection of LEGO Disney sets at a Meijer store, matching that of the VIDIYO models. From a new review, we can now get a closer peek at the build and its many new elements.

The most interesting part of the set for fans of the movie will most likely be the inclusion of the Sisu Dragon build, with a long flowing body and dual -moulded head piece. The horn for the dragon is also transparent with etched detailing, highlighting the fantastical nature of the Sisu Dragon. As the only model to include the dragon in its original form, the 216-piece set might be popular with Disney aficionados.

Two side builds are also included, representing a waterfall and small temple area that seems to be able to connect with 43181 Raya and the Heart Palace. A Mini-doll of Raya makes an appearance here too with the new hat and sword elements, as well as a printed map of Kumandra.

Raya and The Last Dragon will release on Disney+ March 5, preceded by the launch of the sets on March 1. 43184 Raya and Sisu Dragon will retail for $29.99 and there is no word on other regional pricing.