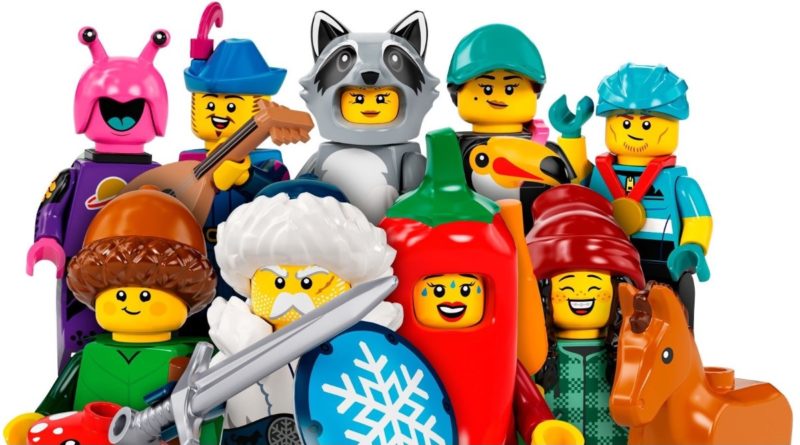 We’ve picked out five intriguing design choices that we hope make their way to other sets, both within and without the Collectible Minifigures line.

A number of recent LEGO sets have included characters with disabilities. The presence of characters in wheelchairs is the most visible, and 71032 Series 22 appears to feature a brand new wheelchair element.

Used by the Wheelchair Racer character, this assembly features three wheels rather than the usual four. The medal element (which has been absent from sets for some time) indicates that this minifigure has been plucked from an athletic context, echoing the Team GB range of 2012. This new piece offers intriguing new play opportunities, as well as a new transparent blue bike wheel. With luck, we’ll see more bike wheel colours (and more uses for this wheelchair) in the future.

Characters in impractical costumes have become a staple of the Collectible Minifigures theme, with people dressing up as hot dogs, alpacas and even crayons. This latest series includes two characters playing dress up: the Chili Costume Fan and Raccoon Costume Fan.

Wide shots of the entire collection show that both minifigures have separate hairpieces. This is unusual for costumed characters in this theme, who must typically make do with their costumes alone. While this is a nice way to snag some extra hairpieces (particularly the Chili Costume Fan’s, which is rare in red) it remains to be seen if this will result in added torso printing. Many costumed characters have plain torsos, which (depending on your perspective) is helpful or disappointing.

Alien minifigures have been appearing in LEGO sets for a long time, but this one may be particularly attractive. It features a new Classic Space torso (in purple this time) and some other interesting prints and part recolours. However, the minifigure’s best feature might be its interesting head piece use.

Older themes like Space Police and Alien Conquest have had to rely on new head moulds to depict otherworldly characters. In contrast, this minifigure appears to re-use the headgear from older characters such as the Bumblebee Girl. This hat has been around for several years at this point, but never with this kind of printing on it.

Some may lament the absence of a new alien head piece (several of which have appeared in this theme before). However, we can’t help but respect this more elegant approach to parts usage.

Of course, sometimes you just need to make a new element. A common example of this is musical instruments; over the years, minifigures have received saxophones, guitars (electric and acoustic) and even violins, complete with bows. Some of these have enjoyed recolours, and all have had repeat appearances in different sets.

The Troubadour seems inspired by medieval history, and includes a new lute element as a result. Although ‘lute’ is surprisingly broad as a category, this instrument is immediately recognisable thanks to its bulbous body and bent neck. The LEGO Group has generally moved away from medieval sets, but if the likes of 21325 Medieval Blacksmith continue to appear, hopefully the lute will re-emerge.

The included coin elements – printed with a crown – are also intriguing. While many prints remain unique to a minifigure, it’s to be hoped these are an exception.

Robots are another staple of Collectible Minifigures, but this Robot Repair Tech minifigure is particularly interesting. Its vibrant yellow colour scheme is applied to its welding helmet face (complete with printed eye detail) and its mechanical right arm, which includes both claw and drill attachments.

This arm piece has enjoyed appearances in themes such as Monster Fighters and Alien Conquest, although it seems to have fallen out of use in recent years. However, its hollow end can accommodate many different pieces, making it extremely useful. This new yellow colour seems well-suited for industrial environments, either custom-built or pre-existing.

The minifigure also comes with a little red robot companion. Although there’s no unusual parts usage to speak of, it’s significantly more complex than most minifigure accessories. Characters in this theme tend to favour new moulds or simpler companions, making this a welcome surprise in the series.

71032 Series 22 will launch on January 1, 2022. Other series are due to release later in the year; rumour has it a range of Muppets minifigures will join them at some point. Happy hunting!

Support the work that Brick Fanatics does by purchasing your LEGO Collectible Minifigures through our affiliate links.