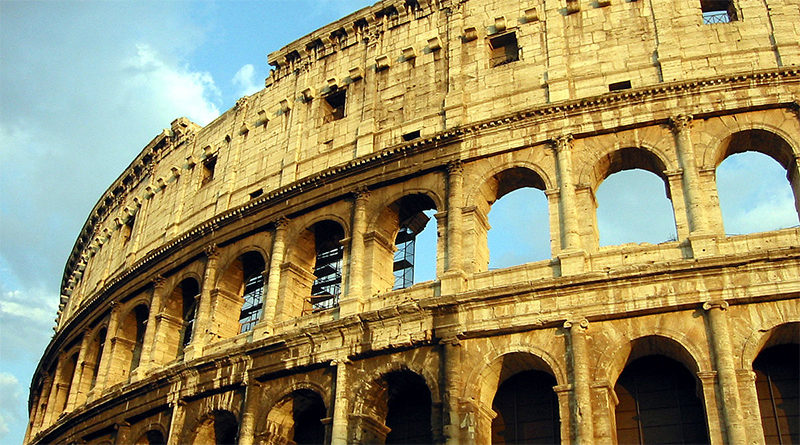 You already know LEGO Creator Expert 10276 Colosseum is the largest set ever released. But how much do you know about the historic Roman landmark?

The Domus Aurea was an example of the excesses of the fifth Roman emperor, Nero. When he had this luxurious home and lake built for himself, featuring a vast complex of fountains that drained water from the surrounding hills, the Roman people reached breaking point and his reign came to and end.

Emperor Vespasian tore down most of the house, drained the lake and commenced the construction of the Colosseum where it had stood.

The Colosseum is the largest amphitheatre in the world and its design still influences modern sporting stadiums and arenas today. It measured 189m long, 156m wide and 50m high. There were 80 entrances and capacity for between 50,000 and 80,000 spectators.

A total of 240 arches made up the structure’s exterior, with these perfect for bearing the heavy load of what was above. By using the repeating archways, the slaves and workers building the Colosseum did not necessarily need to be highly skilled as they were essentially following a template.

The games really were that violent

While Gladiators would fight to death for the amusement of the masses, they also reenacted duels or held fights that resulted in both particpants surviving. Initially gladatorial games were a relatively small scale, spontaneous activity dreamt up by the aristocracy, but by the time the Colosseum opened in 80 A.D., they had become serious business. Much like modern sports, they were advertised on billboards, hyping up anticipation for the events.

It wasn’t just people who were killed in the spectacles held at the Colosseum, with wild animals slaughtered in all manner of ways; some were part of ‘hunts’, in which they were pursued and killed, some were made to fighter gladiators, some were made to fight unarmed prisoners. Entire species of animals disappeared from their native habitats as a result.

Damage over the years

It was in the 1990s when preservation of the Colosseum really started to be taken seriously. Up until then, there was significant damage to the structure, with a mixture of natural disasters and neglect leading to large portions crumbling away.

The last gladiatorial games were held in 435, while the last animal hunts stopped in 523. When it fell out of use, Roman citizens began taking marble from the amphitheatre to build new structures with. The most damaging of three earthquarkes occured in 1349, giving the more familiar shape to the landmark that tourists see today.

Uses through the centuries

For several hundred years after the last games, the Romans used the Colosseum as a place to live, curate gardens and meet up.

During the medieval period, a group of Christian monks moved into the Colosseum, aiming kinship with the Christian martyrs who had died there during the games. It was used as a graveyard until approximately 1200 when the Frangipani family used the structure as a fortress.

Various popes attempted to find uses for the Colosseum, with Pope Sixtus V intending to turn into a wool factory that would employ Rome’s prostitues in the 1500s. None of the initiatives came to much, with attempts at restoring the site beginning in the 1800s.

You can help support the work of Brick Fanatics by ordering either (or both!) from LEGO.com using our affiliate links.