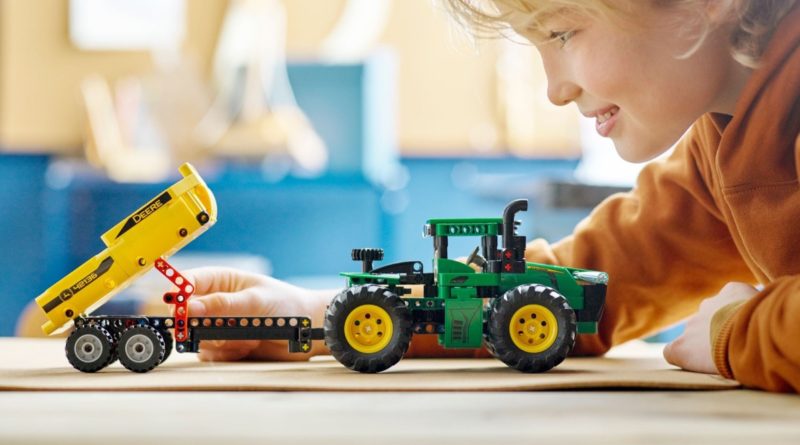 The first LEGO Technic John Deere set launched earlier in March 2022, but there are still many models from the manufacturer that we need.

For the first time in the history of either company, 42136 John Deere 9620R 4WD Tractor is a partnership between the LEGO Group and John Deere and opens up the possibilities of more Technic sets based on agricultural vehicles from the manufacturer.

Considering the mid-sized 42136 John Deere 9620R 4WD Tractor, let’s look at what other sets could work based on John Deere equipment for both lower and higher price points.

Any tractor in the 9R Series range would be worth a massive model, though the wide-wheeled base version could expand on the initial set with a bigger build that integrates CONTROL+ compatibility too.

Also similar to 42136 John Deere 9620R 4WD Tractor is the Autonomous Electric Tractor, smaller than most tractors thanks to the lack of a driver and featuring a design that we’ve not seen before in LEGO Technic, with a single tracked module pulling equipment behind it. Approaching this creation in a mid-sized set could also allow for compatibility with 42136 John Deere 9620R 4WD Tractor, increasing the value of both.

The last LEGO Technic Combine Harvester was released in 2007 as 8274 Combine Harvester. Another model at this vehicle with a brand attached could allow for an increased budget to represent the agricultural features, and one option for the inspiration could be the T Series T550

Lawn mowers are surprisingly few and far between in the world of LEGO and one way to remedy this could be to partner with John Deere for a recreation of the X Series X940, a riding mower that could work as a smaller LEGO Technic set, without skipping on the necessary functions such as the spinning blades and steering.

John Deere is known for its forestry equipment, a topic that LEGO Technic has explored before in 2018 with 42080 Forest Harvester. Allocating a larger piece count towards another agricultural creation could expand on the details in the previous model, including the spinning cab of the 1470G.

Support the work that Brick Fanatics does by purchasing your LEGO Technic sets using any one of our affiliate links.