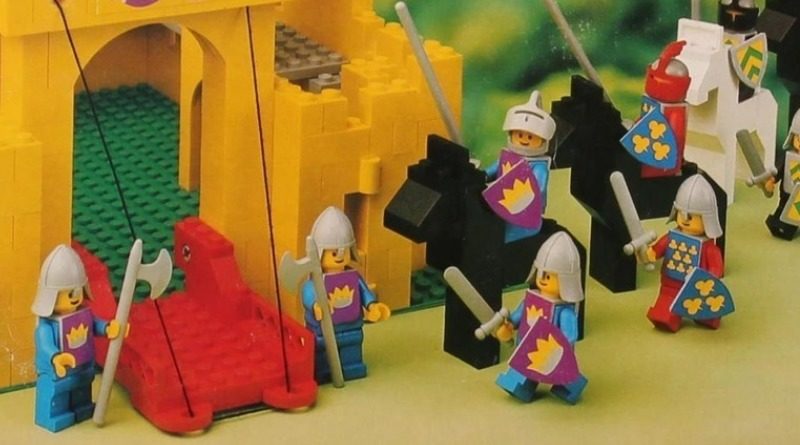 The imminent launch of LEGO Ideas 21325 Medieval Blacksmith has us yearning for more Classic Castle, so we’ve come up with five ways the LEGO Group could resurrect one of its oldest themes.

While Classic Space and Pirates have enjoyed a real resurgence over the past few years, whether indirectly through the LEGO movies or directly in 21322 Pirates of Barracuda Bay, Classic Castle hasn’t really enjoyed the same treatment – until now.

21325 Medieval Blacksmith is a celebration of everything that made Classic Castle so great, apart from the actual castle bit. And as you can read in our in-depth review of the latest LEGO Ideas set, it’s left us hungry for the true return of LEGO fortresses. In that spirit, here are five ways the LEGO Group could bring back Classic Castle.

We’ll get the most obvious one out of the way first, because this summer’s Creator 3-in-1 line is already rumoured to include a castle set of some sort. We’re not sure exactly what it will look like if it does come to pass, but given the theme’s penchant for using regular bricks (epitomised by the brick-built sails in last year’s 31109 Pirate Ship), we’re hoping for a sizeable fortress that doesn’t rely on juniorised wall elements.

And just as its space subtheme has continued from 2020’s 31107 Space Rover Explorer in the upcoming 31115 Space Mining Mech, it would be great to see a range of castle-themed Creator 3-in-1 sets over the next couple of years.

We’re not super keen on the thought of paying extra for castle-themed sets simply for being attached to a licence, but it’s better than nothing. The only problem is that there aren’t many TV shows or films set in the Middle Ages for the LEGO Group to latch on to right now – or at least, none suitable for its target audience. Netflix’s The Last Kingdom would pave the way for the double return of Castle and Vikings, for instance, but it’s way too violent for the LEGO Group.

There is one glimmer of hope on the horizon, though, as Amazon is currently producing a TV series based around The Lord of the Rings. Depending on the exact content that show delivers, it could be the perfect excuse to bring Middle Earth back into the fold, which is really the best possible outcome should a licence be the only avenue for Classic Castle to return.

3 – As an annual release

The LEGO Group has settled into plenty of annual release patterns across its wider portfolio, be it in the Modular Buildings Collection, the Winter Village Collection or (as it’s rumoured to be branded from 2021 onwards) the Vehicle Collection. So, why not extend that line-up to include the Medieval Collection?

21325 Medieval Blacksmith would be the perfect starting point for a wider medieval village (hello, 10193 Medieval Market Village), which could include civilian dwellings, farmhouses, gateposts, and – eventually – a castle. Each set could theoretically then enjoy the same attention to detail and budget that’s been poured into the latest LEGO Ideas model, allowing us to build up a huge slice of Middle Ages action, one building at a time.

21325 Medieval Blacksmith isn’t to Classic Castle what 21322 Pirates of Barracuda Bay was to Pirates. Not really. After all, 21322 actually includes pirates. And while 21325 chucks us a nice nostalgic nod in its Black Falcon knights, it still doesn’t deliver the kind of imposing fortress we’ve not seen in bricks since 2013’s disappointing 70404 King’s Castle.

For a true comparison between a Classic Castle-themed set and 21322 Pirates of Barracuda Bay, we want to see an enormous castle built with seemingly no limitations, be it in design or budget, coming together as a true celebration of the fundamentals of the original theme. That’s exactly what 2020’s Ideas set was to Pirates, and we’d love to see the same for Castle, as a one-off 18+ release that can really do justice to the LEGO Group’s modern design techniques and part palette.

While one-off releases are a better delivery vehicle for the LEGO Group’s biggest and best sets, and we’d certainly love to see Classic Castle given that treatment, the only way to get a diverse range of sets in different sizes (and in high volumes) is with a full-blown theme. The last wave of castle-themed sets arrived in 2013 to a limp reception, owing mainly to their bland, basic builds and juniorised aesthetic.

Just two years earlier, Kingdoms was bringing us stone cold classics like 7189 Mill Village Raid, so we know the LEGO Group has it in the tank. We only need it to funnel its resources into reimagining what Castle could look like in 2021, as it’s so expertly done with 21325 Medieval Blacksmith. Indeed, there’s really no better starting point – we just need more.

LEGO Ideas 21325 Medieval Blacksmith will launch on February 1. You can support the work Brick Fanatics does by ordering it through any one of our affiliate links.