LEGO sets aren’t historically known for their accuracy when released in tandem with the movie they’re inspired by – will those based on Avengers: Infinity War be any different? With the superhero sequel in cinemas now, we compare the latest batch of LEGO Marvel Super Heroes sets to their on-screen counterparts

The LEGO Group’s Avengers: Infinity War range has been available for a few weeks now, but without seeing the movie, it was tricky to judge the accuracy of the sets. At last, though, the culmination of 10 years and countless superhero films has arrived in cinemas, and so we can finally, needlessly and pedantically pick apart every aspect of the six tie-in LEGO products.

The good news? They’re actually almost spot on. Yep, there are no Iron Man 3-style horrors here – you can keep your flaming golf cart debacles and fire them into the sun where they belong. For a set-by-set breakdown, read on. But beware: spoilers abound… 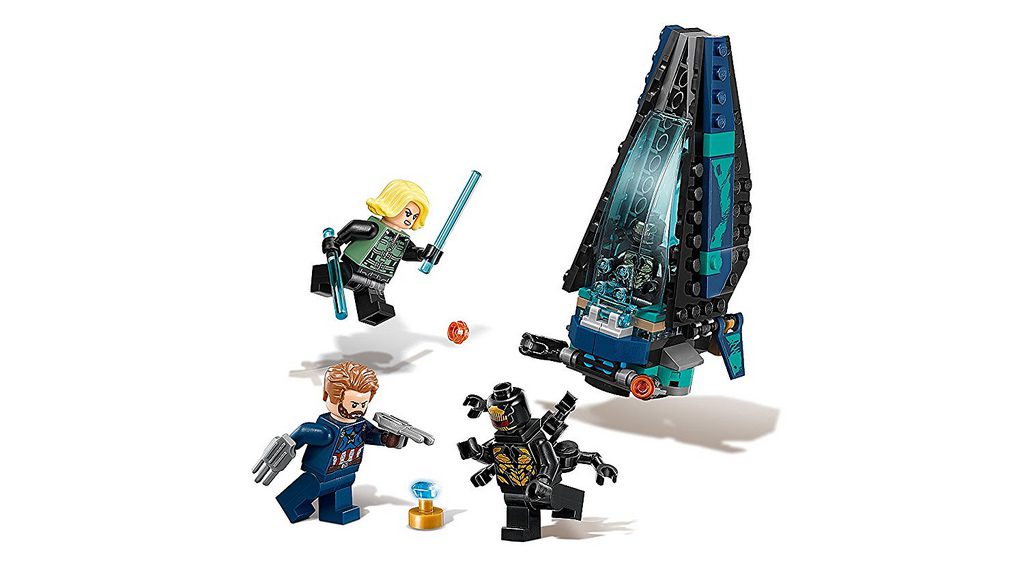 The Infinity War range’s battle pack-not-a-battle pack is the first of three sets to focus on the Wakanda battle that takes place in the movie’s third act, and it’s hard to knock in terms of relevance. Captain America and Black Widow are both on the ground during that fight, and the Outriders are as good as you’re going to get in minifigure form. The dropship itself may be stupidly undersized, but if you display it way up in the air above the ground battle, you can just tell yourself it’s a matter of perspective. We won’t judge you. Promise. 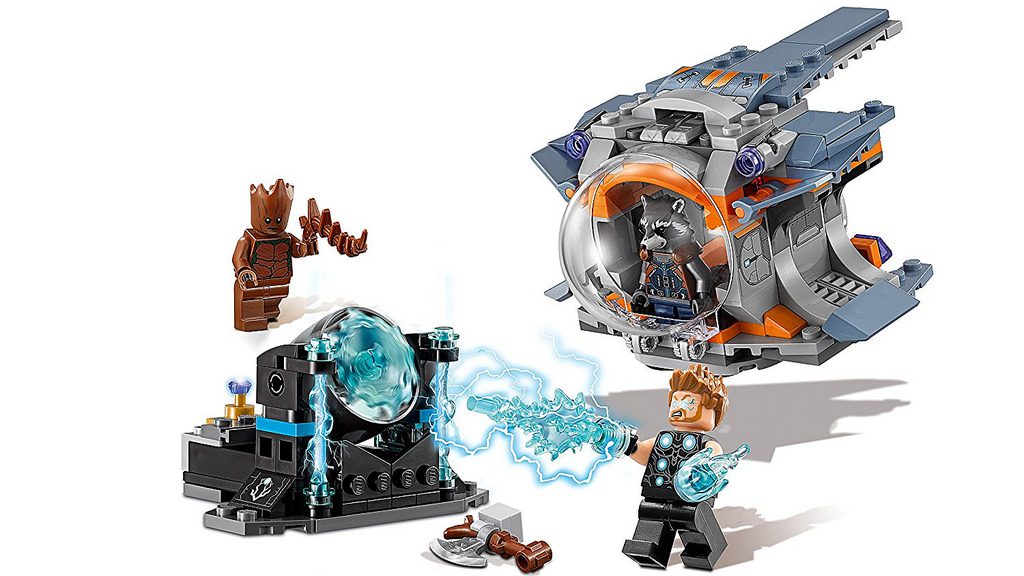 Of all the opportunities Infinity War threw up for LEGO sets, this seemed like an obvious one. Once Thor, Rocket Raccoon and Groot part ways with the rest of the Guardians, their journey to Nidavellir takes up a good chunk of the movie. And as LEGO set titles go, it doesn’t get more literal than this, as the Norse god desperately searches for a Mjolnir replacement to defeat Thanos.

So, the minifigures are totally accurate to the scene it’s trying to depict, even if Thor’s eyes don’t really go all blue and lightning-y (that’s the technical term) until he arrives on Wakanda. Still, it makes him useful for more than just the Nidavellir scene in this set, so we’re not complaining. The escape pod itself is undersized, but only a little, and it’s fine given the price point. The rear door definitely wasn’t a complete window, but we’re not sure it could have been achieved properly with the part count at hand.

The forge is neither here nor there unfortunately – as a small slice of the scene it sort of works, but it really could have done with orange power blast elements as well as blue. The Stormbreaker axe, thankfully, is spot on. 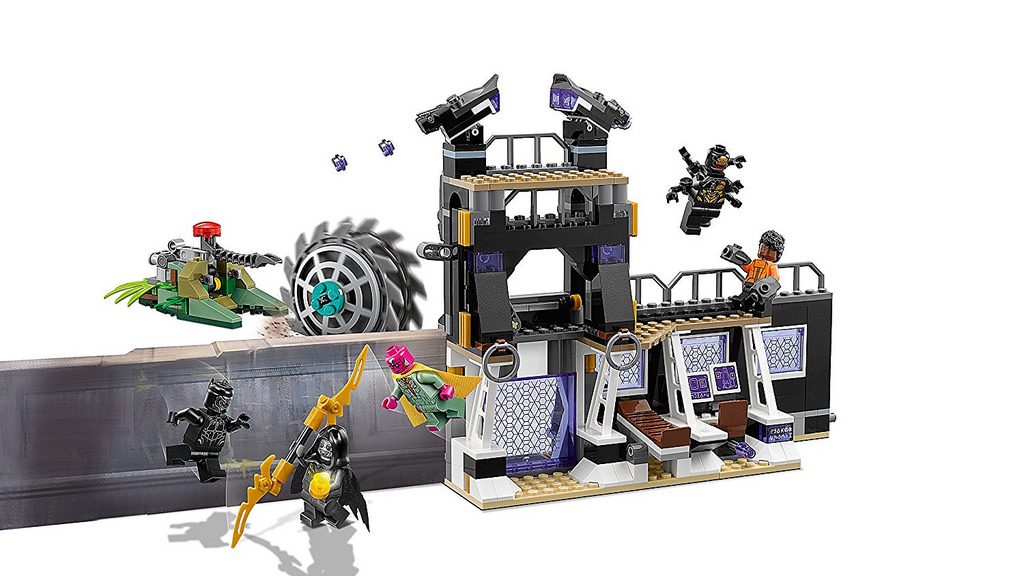 While it’s difficult to attribute the thresher attack in the movie to just Corvus Glaive – all three of the remaining Black Order members were on the ground in the battle, after all – it would be way too pedantic to pick fault with the set’s name, so we’ll let it go. That said, Proxima Midnight may have been more appropriate here, seeing as she was the one to get chopped up by the massive jagged wheels.

Speaking of, the thresher included is really just one part of what was a massive, multi-wheeled death contraption in the movie, presumably dreamt up by whichever child of Thanos was rescued from their grim life toiling away on a farm, and now unleashes their burning resentment in the form of death by combine harvester. Naturally, the LEGO version is way too small compared to its cinematic counterpart, even for a segment of it, but the saw discs are a decent single-element solution for the blades.

The bulk of the set – the Wakandan wall – isn’t rescued from being dull by its brief appearance in the movie, largely because most of this scene took place on a vast, open battlefield. Then again, that probably wouldn’t have made for a great set, so its inclusion is understandable. Between the lab and operating table, the interior takes a decent stab at replicating the events of the movie, but it’s more of an adaptation than a literal recreation.

That interior does mean that Vision was only ever going to show up in this set, but we really should have seen Scarlet Witch included here, considering how significant her role was opposite Paul Bettany’s character. Alas, the minifigure count is already pretty generous, and everyone else is key to this scene too. 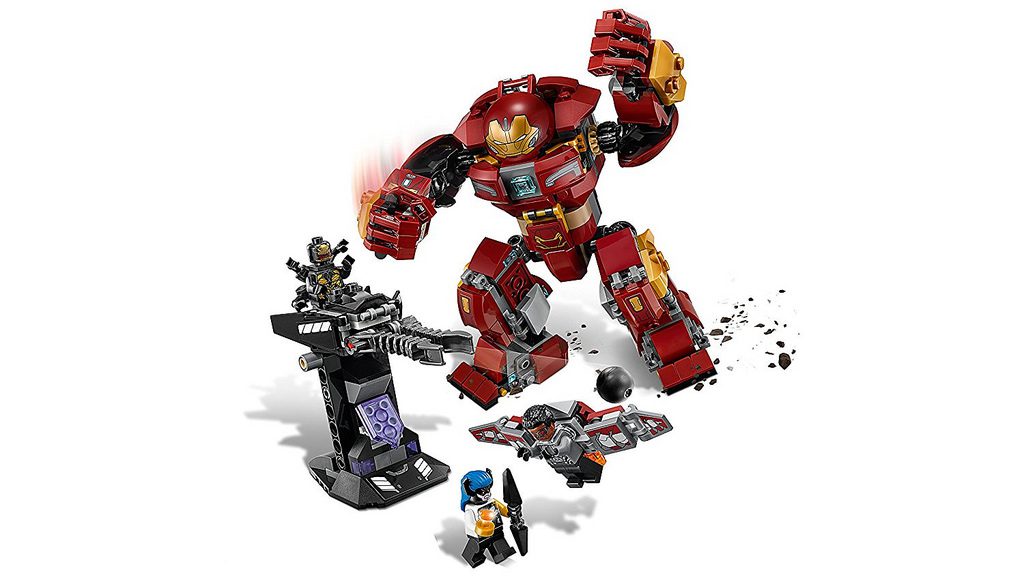 Okay, admit it: who else has no clue what that turret is about? Really, those parts could easily have been saved to either improve the Hulkbuster even further – although it’s already a great rendition for the price point – or left out in favour of Cull Obsidian, which would have not only been scene-appropriate, but left more budget free in 76108 for a bigger and better building (or simply more minifigures).

That gripe aside, this is all par for the course – Bruce Banner pilots the Hulkbuster, and his angry eyes face is even on point, although we’d have liked to have seen more of the Hulk in there, a la DC’s Two-Face. While Proxima Midnight is a fun character to have, it’s almost like she’s been based off her comic appearance rather than the movie – in minifigure form, she’s far brighter than her muted on-screen counterpart. 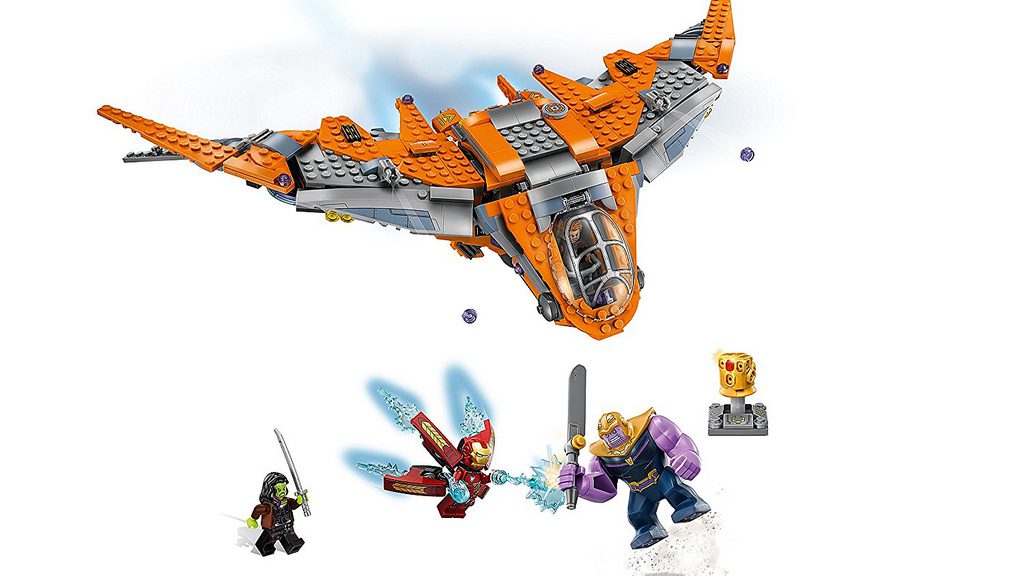 The Guardians’ new ship is present and correct in Infinity War, and has plenty to do. Unfortunately, most of its screen time is spent in space where everything is super dark (especially if you watch it in 3D), so it’s hard to get a good look at its colour scheme. To that end, it’s tough to say whether bright orange was the right choice, but it looks cool, so we’ll roll with it.

Obviously, much like the Milano before it, this was never going to be minifigure scale, but it does a decent job with the proportions anyway. It’s perhaps a little wider than in the movie, but we’d have to see it three or four more times to be sure. (Not that we’d have any aversion to doing that, of course.)

We’d have loved to have seen Thanos with a removable helmet – he rarely dons it in the movie – instead of sticking with the same old bigfig mould, and for what is the MCU’s ultimate villain, he definitely deserved that extra attention. In terms of what we did get, though, he’s fine, and his Infinity Gauntlet is perfect.

Iron Man is less so – it looks as if every toy manufacturer had the wrong idea about his rear thrusters, which actually weren’t thrusters at all in the movie. Instead, they detached from Tony Stark’s suit to fire power beams at Ebony Maw in the opening New York battle, so this variant would have been better swapped with that in 76108.

Star Lord and Gamora are great minifigure choices, however, with both enjoying significant roles in the movie – Gamora in particular. Indeed, this is basically our last chance to get her as a(nother) minifigure, barring her return in Guardians of the Galaxy Vol. 3: The Search for Gamora. (Hey, Disney is no stranger to films driven by a quest to find someone. Let’s just hope she has more lines than Luke Skywalker.) 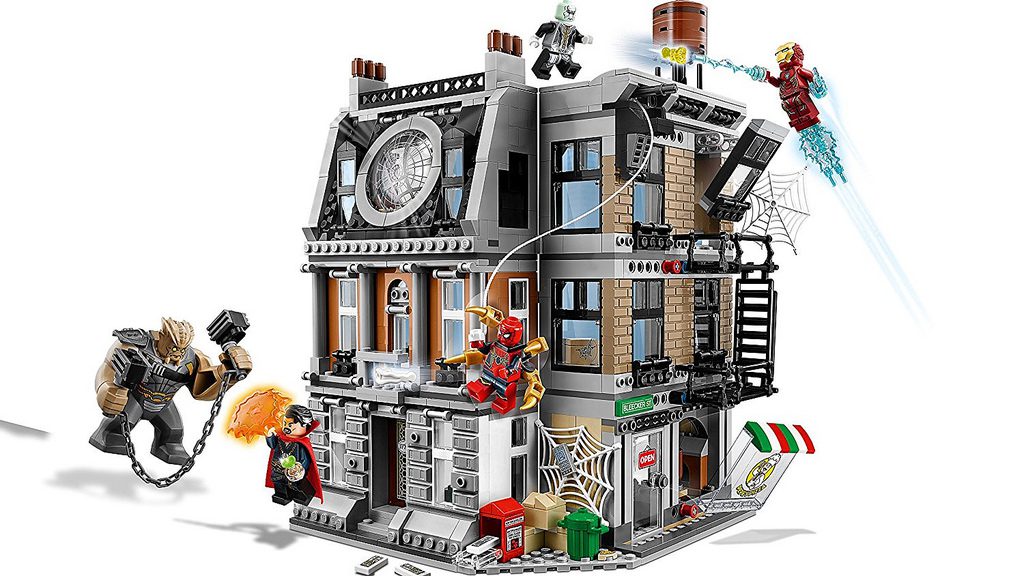 Yeah, as suspected, Dr. Strange’s Sanctum Sanctorum and Peter Parker’s apartment were definitely not next door to each other in the movie. Or at least, we can assume they weren’t – we never even visited the latter, picking up with Pete on a school bus and spending the rest of the movie with him in space.

Still, plenty goes down in the Sanctorum in the movie’s first act, and these are undoubtedly the right minifigures for the scene. Wong would have been a welcome addition, particularly as he doesn’t appear anywhere else in the Infinity War range – Bruce Banner, who also takes centre stage in this scene, does, but he’s in 76104. No big deal.

Ebony Maw’s head is a little lacking in hindsight – it’s a cool colour for a LEGO piece, but not really accurate, and a moulded head may have been more appropriate. Cull Obsidian, meanwhile, doesn’t resemble his movie incarnation much at all, but that’s just another mark against the universal application of the same, only-slightly-modified bigfig mould.

While a set dedicated solely to the Sanctorum would have been more accurate, we’re not complaining too much, because this is just a great set as it is, with plenty of variety between the two façades. And, you know, you can always flesh out just the Sanctorum side of it if you like.

Avengers: Infinity War is in cinemas now, and the full range of Marvel Super Heroes sets are available now from shop.LEGO.com. You can support the work we do on Brick Fanatics by purchasing your LEGO through our affiliate links.