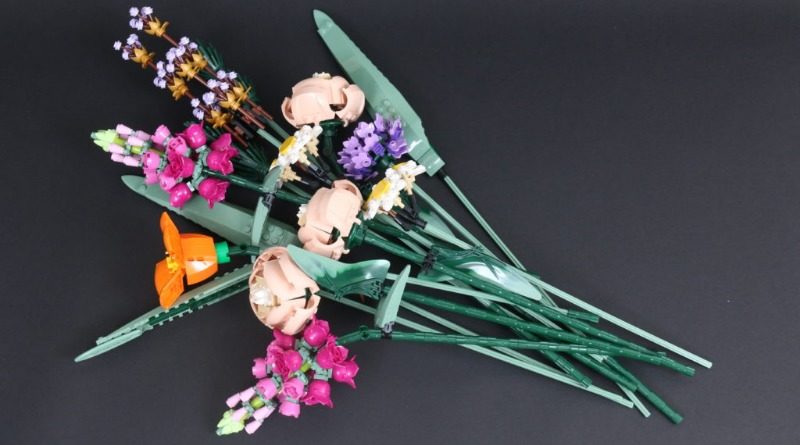 Introducing a brand new concept into the LEGO Group’s portfolio is never easy, and 10280 Flower Bouquet was no exception. Lead designer Anderson Grubb reveals the biggest challenges he faced in assembling the buildable flowers.

The LEGO Group is continuing to diversify its 18+ portfolio in 2021, branching out from football stadiums and fairground rides to blacksmiths and buildable flowers. The latter falls under the heading of the LEGO Botanical Collection, and currently consists of two sets: 10280 Flower Bouquet and 10281 Bonsai Tree.

Brick-built flowers are something we’ve rarely seen in LEGO before, and certainly not at the scale of 10280 Flower Bouquet. That presented plenty of challenges for its lead designer, Anderson Grubb, who recently sat down with select LEGO Fan Media to talk about how he assembled the unique arrangement ­– and the solutions he found to some of the trickier aspects of its design.

Which flower posed the greatest design challenge for you?

Finding big pieces that would work well as leaves, and really helped fill out the bouquet, was more of a challenge than I expected. So much of the visual attention is on the beautiful blooms, but you’d be a little surprised – like I was – how small a bouquet can feel when you don’t have that greenery to help fill it in and give it an exciting profile. So, finding ways to achieve that, with the pieces on hand, was more of a challenge than expected.

What was the problem in designing the set that you found most satisfying to solve?

One of the things that was very satisfying to realise would be so simple in its elegance is the relatively new [1x2x1.67 modified brick] with 10 studs – the one in the middle of the poppy. That piece was relatively new to us as we were working on this project. When I came around to the build, I realised those would make the perfect, simple core, that will just hold it all together and make this flower. That was very satisfying. [It’s] another beautiful use for this piece, [which] is going to be so practical.

What is your favourite technique in this set?

One of the most subtle things that you have might not have any clue why we did it is the two half-cylinder wall elements that are in the middle of the Aster flower. The reason those are in there, as opposed to a 2×2 round brick, is because it turned out to be too hard, with too much friction, to push the axle through once that flower was done with all that stuff stacked.

We were in the middle of a quality meeting where we were reworking some of the models figuring out what would be best, and one of my colleagues suggested we swap that out for those new half-cylinder pieces. We all put it together, and it just went in and felt so solid. It was so satisfying. That was great. That’s not something that offers a visual appeal; it’s just a satisfying build technique that I want to tell you about because it’s so good.

What was it like designing a set that encourages the builder to arrange it in their own way?

The biggest thing with a flower bouquet is not just the individual flowers. It’s: ‘Which ones do we include? How do you arrange them?’ It encourages experimenting. Does this bunch of flowers look good together? What if you split them up and arrange them in different configurations? How does that look?

The stem design was a solution to a couple of different problems. It turned out we could offer adjustability, knowing that people might want to have them longer or shorter. Also, we deliberately put the leaf pieces on the stems in a way that it will catch on the edge of a vase, so the flower stays above the rim no matter how you put it in. All of this factors into how we make this work. It was a neat challenge, for sure.

Did you encounter any particular challenges in the building experience? So making sure the flowers were fun to assemble, and the building flow made sense.

I think one in particular that I know will be challenging is the lavender, because it uses such delicate connections. So, [we’re] sitting there, just thinking, ‘How do we go about putting things together?’ Making sure, for instance, those stalks don’t get too tall and fall over in your hands. It is a general process we go through and try to improve, particularly knowing this is going to be, in some ways, quite different to a regular set.

Was there ever any point where you wanted to create a new element to try to solve a problem?

Because I was new, I wasn’t even offered the chance to talk about a new element on this. It didn’t cross my mind until after we were done, what would have helped. I think one of the things that might surprise you as a challenge was that we realised fairly early on that we wanted to present the bouquet with a very interesting profile, with a lot of volume. That’s usually achieved in a bouquet through the greenery – the leaves that fill it in.

We don’t have that many really big green parts, or parts that work well organically in a big size. I think in retrospect, it would have been great to have something that filled in that gap. But on the other hand, I’m quite happy with the fun we got to have with those alternative pieces, making up those leaves. I’m very proud of those sand green surfboards.

10280 Flower Bouquet is available now at LEGO.com, except where it isn’t, because its obvious popularity has seen it fly off virtual shelves. If it’s temporarily out of stock in your region, sign up to our email alerts and we’ll let you know when it’s back. You can read our review of the Botanical Collection set here. Keep your eyes peeled for more from Anderson on 10280 Flower Bouquet, including why its roses aren’t red and the details that didn’t make the cut – and in case you missed it, he’s already discussed how the LEGO Group decided which flowers to include in the box.