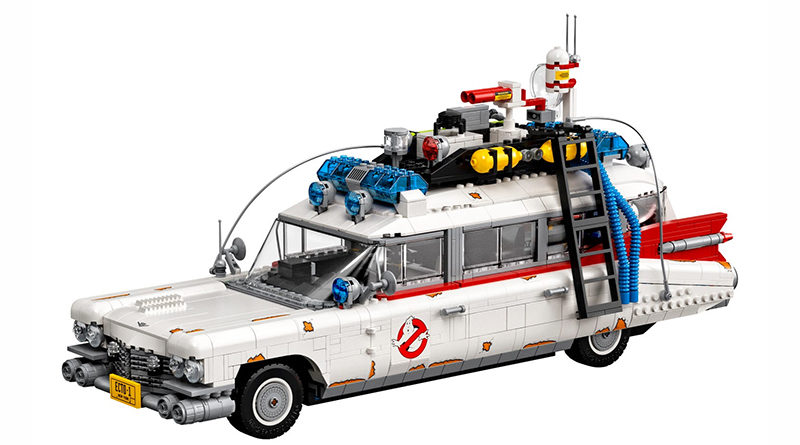 Who ya gonna call? LEGO 10274 Ghostbusters ECTO-1 is answering the call, ready for franchise’s return next year (the film was delayed from this summer). Thankfully, the car is so familiar from Ghostbusters and Ghostbusters II that fans are going to be more than ready for this LEGO set regardless.

Brick Fanatics has reviewed the new set, which is available from LEGO.com now, with these five things about cinema’s most famous 1959 Cadillac Miller-Meteor Futura Duplex standing out…

Sure, for the LEGO Ghostbusters starved audience, Ideas 21108 Ghostbusters ECTO-1 was just what fans thought they wanted. That crude little minifigure scale model is nothing though compared to this beautiful, detailed build. More than 2,000 elements has allowed the LEGO design team to offer key features that could not be squeezed into the smaller edition, giving ECTO-1 the sort of treatment it truly deserves.

This is one of those builds that is packed with ‘wow’ moments. Getting the distinctive shape of the famous converted Cadallic is no easy challenge, yet it has been achieved here thanks to lots of little sections that come together to offer something very clever indeed. As the shape of the car comes together, wannabe Ghostbusters will struggle to suppress a smile.

Some things that fans enjoy as children get a hazy mix of memories around them. Was there a swing out/pull out seat on the ECTO-1 in Ghostbusters or Ghostbusters II? Of course not, but those of a certain age fondly remember the Kenner toy that did feature such a function.

It seems that the filmmakers behind Ghostbusters: Afterlife remember that beloved toy too, as ECTO-1 will feature a gunner seat in the new movie – and it’s replicated in this LEGO set, to excellent effect.

4. The instruction book is special

In Ghostbusters: Afterlife, which has been pushed back to next year, ECTO-1 will be discovered and my require a little restoration. So that fans feel that story themselves, the instructions come in a large envelope. The book inside looks like an old Haynes car manual – a great throwback for any automotive fans old enough to remember them.

The roof is home to all manner of paranormal spook-seeking equipment, which is great fun to build. It offers real variety after spending so long working on the car. What’s more, the instruction book includes a guide to the equipment – who knew the aerial on top is actually called the ‘Modified Marine Radome Antenna’ or that the two bright red pipes that scan for paranormal activity are nicknamed the ‘sniffers’?