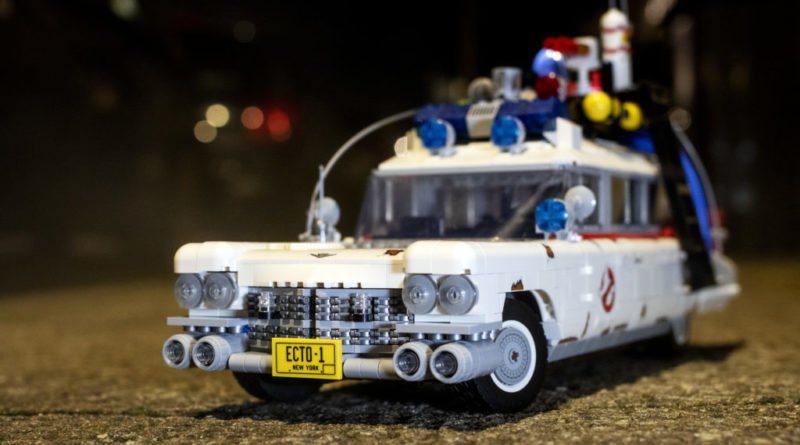 LEGO 10274 Ghostbusters ECTO-1 is a beautiful recreation of the classic converted Cadillac as well as a unique and surprising building experience.

Ghostbusters: Afterlife, the hotly anticipated sequel to the original 1980s classics Ghostbusters and Ghostbusters II, not only heralds the comeback of a cast of memorable and much loved characters, but also marks the return of the iconic and instantly recognisable vehicle, ECTO-1 – albeit in a slightly more dilapidated state than the last time it graced the silver screen.

Originally slated for the summer of 2020, a certain global pandemic has led to a delay in the film appearing in cinemas until June 2021 (it will be 37 years since the original hit the screens), but that hasn’t stopped the LEGO Group from releasing their latest iteration of moviedom’s most famous 1959 Cadillac Miller-Meteor Futura Duplex.

Coming in at 2352 pieces, 10274 Ghostbusters ECTO-1 is a massive upgrade on 2014’s LEGO Ideas 21108 Ghostbusters ECTO-1, which used just 508 pieces. It’s recommended for adults, 18+, measures just under half a metre long and promises to be a spooktacular building experience.

The 18+ age range has been somewhat divisive since its launch this year. While some sets have hit the mark, others have left fans scratching their heads as to why they are aimed at adults. Before even delving inside, LEGO 10274 Ghostbusters ECTO-1 feels like it meets expectations for this range. The box art is stylish, with the completed model presented on a black reflective surface adding an extra layer of quality.

23 separate bags numbered 1 through to 12 contain the 2,352 pieces needed to complete ECTO-1. A separate bag is used for a large windscreen, two rear windows and four tyres. Unusually a large envelope contains the instruction book, designed to look like an old Haynes car manual – a really nice touch and a great throwback for any automotive fans old enough to remember them. In Ghostbusters: Afterlife, ECTO-1 is found abandoned in an old shed and must be rebuilt to its former glory – this set is no different. A personal call to arms to any would be builders is contained within the first few pages of the manual, detailing exactly how you can help bring the Ectomobile back to life. After a few more pages dedicated to the famous car’s appearance in the first two films, it’s onto the build.

As expected with a vehicle of this size (the finished model measures just under half a metre) a considerable Technic frame is needed to help support the finished model. While this stage isn’t particularly challenging, a moderate amount of concentration is needed, especially for those unfamiliar with the techniques required for LEGO Technic assemblies.

These model orientated sets aren’t always designed with play features in mind but with so many ghostbusting gadgets on board ECTO-1 it would be rather remiss to not include any functionality here. The mechanisms for the front steering, eventually controlled by twisting a trans clear 2×2 round brick on the roof, and a rooftop radar are added fairly early in the build.

The most impressive of the play features though is a new addition to ECTO-1, as seen in the early trailers for Afterlife – a gunner’s seat complete with Proton Pack (including the printed part from the original LEGO ECTO-1) that swivels out of the side, presumably allowing a Ghostbuster to chase down and capture ghouls at high speed – ghosts beware, these busters now hunt on the move.

To operate, a side panel is pressed in from the opposite side pushing the chair out of the other. In a rather unconventional technique neither the mechanism for the seat, nor the side panel of the car are actually attached to anything. Instead they are placed upon the tiles connected to the base of the framework and simply slide in and out. A 1×2 jumper at the end of the seat hits a 1×4 brick with studs on the side, preventing the whole contraption from pushing out all the way. Seeing something so simplistic is surprising, yet it works perfectly.

This unusual building technique marks the start of a continuing theme within this set, unique sub assemblies fitting together in varied and abstract ways. At times the set feels more akin to a jigsaw puzzle than a LEGO model but that just makes the experience incredibly intriguing and even more rewarding to piece together.

Rear lights are constructed using two flat silver goblets, which clip onto Technic bricks and then attach to 1×1 plates. The 1×1 plates then fit snugly into holes left exposed within the body work. 1×1 bricks with studs are used in various ways to offset assemblies of slopes, bricks and plates, which are then slotted into place throughout the back section. At one point 1×1 tiles with clips are attached to one end of a 1×12 plate with brackets at the other and an interior brick built seat is then connected to a Technic brick. To complete this weird ensemble at the far end is a 1×2 curved tile. Just enough room has been left to attach the whole sub assembly onto the rear, creating a fantastic curved angle to the back of the vehicle.

The LEGO designer admits in the manual that the most head scratching part of the design process came when trying to achieve the distinctive shape of the famous converted Cadallic, but overall Mike Psiaki did a fantastic job. Some of the shaping comes in the conventional curves, slopes and plates that fans of LEGO vehicle building are accustomed to, but a vast majority are yet again achieved by intriguing sub assemblies attached in unique and innovative ways. Offset builds using 1×3 jumpers, curved bricks attached via clips to 1x4x2 bars integrated into the body work, and a personal highlight, side panels attached to staggered ball and socket joints to create angles that would otherwise be impossible. Even better, the sub assemblies are asymmetrical so there is very little repetition throughout the build.

Not only is this a set that demonstrates innovative building techniques but it’s also an example of how versatile LEGO elements can actually be, and how even the most innocuous of parts can be used to great effect. Trans clear minifigure heads are used for engine parts, barrels replicate headlamps, and an absolutely inspired design choice using flat silver minifigure roller skates for the front bumper grille. They look so accurate it’s almost as if they were designed for this exact purpose.

It’s not just the build for the body work that’s ingenious. There’s a highly involved engine and an equally detailed dashboard, utilising a combination of stickers and printed pieces to represent both a normal array of automotive dials plus some extra ghostbusting gadgets. In the back there are even more gizmos in the form of a portable paranormal lab.

Of course, what really makes ECTO-1 so recognisable is the impressive collection of ghostbusting equipment placed across the roof. For fans that aren’t familiar with what every single piece of kit does, there’s a handy guide contained within the instructions – who knew the aerial on top is actually called the ‘Modified Marine Radome Antenna’ or that the two bright red pipes that scan for paranormal activity are nicknamed the ‘sniffers’?

With so many positives to take from this set there is one downside to report – the stickers. For once, it’s not the amount that’s the issue at hand, but the art style. Stickers are used across the entire bodywork to represent rust and wear and tear, and the graphic design looks very unrealistic compared to the rest of the build. There’s an almost cartoonish look, which really detracts from the overall aesthetic appeal of the model. For review purposes they had to be applied, but it’s definitely worth thinking about leaving them off. There are a few nice printed parts too, including the Ghosbuster logo elements – did anyone know that the ghost was called ‘Moogie?’

When comparing 10274 Ghostbusters ECTO-1 to other LEGO sets, there are two that instantly spring to mind – the cinematic classic recreations 76139 1989 Batmobile and 10262 James Bond Aston Martin DB5. Ecto 1 feels like it sits somewhere in between these two in a lot of ways; the build, the finished size, functionality and displayability.

Appropriately enough the price point is right in the middle of those two sets. Fans of Ghostbusters have been waiting for an ECTO-1 of this scale for years and would probably pay any amount of money, but what is on offer here seems very reasonable, especially when taking into consideration how innovative the set is.

ECTO-1 is such an iconic vehicle that it seems only right for the LEGO Group to finally give fans a version at this scale. We’ve waited a long time, but it’s certainly been worth it. This is a set that encapsulates all that is good about the LEGO experience – it’s a build that is deep, involved, unique and satisfying. It produces a finished model that looks absolutely incredible, accurate to its on screen counterpart, even when it comes to functionality.

Ghostbusters: Afterlife may have been delayed, but this is a set that will give fans a decent fix of Ghostbusting nostalgia until the film is released next year. Who ya gonna call? Your local LEGO stockist.

10274 Ghostbusters ECTO-1 will be available at LEGO.com from November 15. You can help support Brick Fanatics’ work by using our affiliate links.