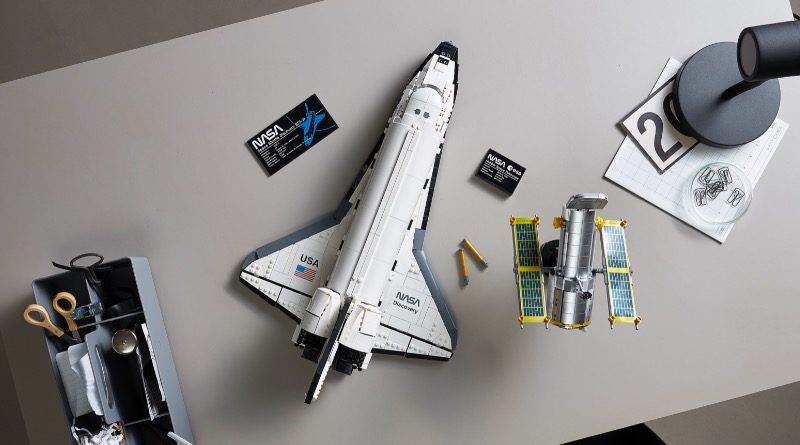 LEGO 10283 NASA Space Shuttle Discovery has set a new record for the most number of elements in a single set – at least where one very rare colour is concerned.

In a designer video for the LEGO Group’s latest 18+ set based on a real-life rocket, Nico Vas revealed that he learned from fellow designer Milan Madge that the Discovery isn’t actually a rocket at all – and that his own discovery led to a new record for the company’s current portfolio.

“Working with Milan was amazing, because he knows so much about space travel and everything space-related,” Nico explained. “I just like LEGO a lot, so I was constantly calling this model a rocket or an aeroplane, but I learnt from Milan that this is actually a space shuttle.”

That wasn’t the only thing Milan taught his colleague, though. “I was trying to describe how important the Hubble Space Telescope was to Nico, and I was telling him that it could see 72 million light years away in our universe, and it’s really good at looking,” Milan added.

This information then led Nico down a very specific path when designing 10283 NASA Space Shuttle Discovery’s payload. “Milan told me that the Hubble Space Telescope was really good looking, so we made the model entirely drum lacquered silver,” he elaborated.

Okay, so maybe that wasn’t literally what happened, but it’s a pretty good gag for a designer video all the same – and one that acts as the perfect setup for Nico to reveal that 10283 NASA Space Shuttle Discovery includes a whopping 108 elements in drum lacquered silver, the most in any one set to date.

Drum lacquering isn’t quite the same as moulding a brick in a specific colour: instead, it involves applying a thin layer of ink over the bricks, in a similar manner to the chrome elements of old. Where that reflective coating would eventually wear away, though, drum lacquering pieces seems to be a little more durable.

Silver isn’t the only colour the LEGO Group has applied the process to, either, as Monkie Kid fans will already know: the Journey to the West-inspired theme’s 80012 Monkey King Warrior Mech currently holds the record for the most number of drum lacquered gold elements in a single model, making that and the Discovery two to get if you like shiny LEGO sets…

10283 NASA Space Shuttle Discovery launches from Billund on April 1. For more, check out all the details (including its price and piece count), peruse the full gallery of images, find out how it replicates the real-life shuttle, and hear how it got the seal of approval from a former NASA astronaut.