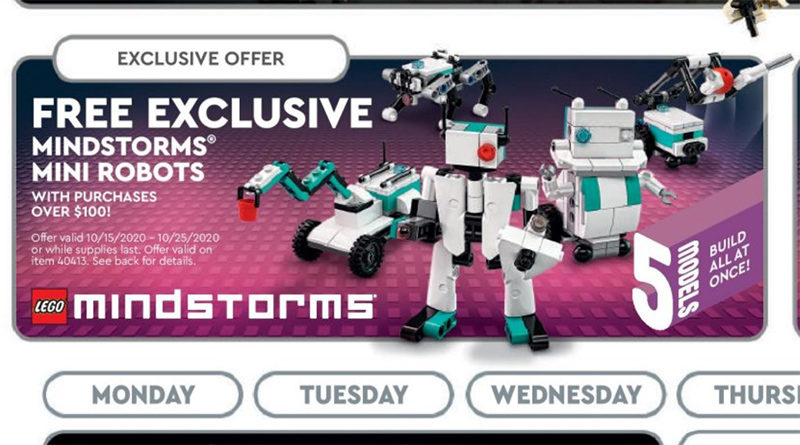 In October, fans will be able to get 40413 MINDSTORMS Mini Robots – a tiny version of the new LEGO MINDSTORMS set – for free with qualifying orders.

LEGO MINDSTORMS 51515 Robot Inventor will be released in October along with a promotion for a polybag tribute to the set. Anyone spending $100 or more will get 40413 MINDSTORMS Mini Robots for free during a promotional period.

The deal will run from October 15 until October 25, the new LEGO Store calendar, shared by the Brick Fan, confirms. 40413 builds five little models inspired by the full-sized versions in 51515.

Announced back in June, LEGO MINDSTORMS 51515 Robot Inventor is the latest generation of the coding system. Using new LEGO Powered UP elements, the set takes the theme to a new level technologically.

51515 Robot Inventor will be priced at £329.99 in the UK and $359.99 in the US. It offers five different designs for fans to build, which can them be programmed via the MINDSTORMS Robot Inventor app. Beyond the five models with instructions, there are coding challenges to complete that will require users to apply the skills they have learned through the process. Drag-and-drop coding teaches the process, with Python included for advanced coders.