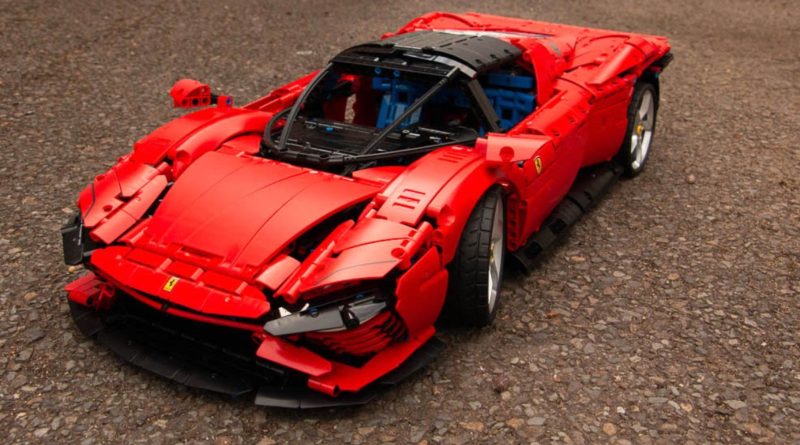 Take a cool 200mph spin in LEGO Technic’s latest supercar, 42143 Ferrari Daytona SP3 – but be prepared for a bumpy ride.

In 2021, the LEGO Group introduced the Botanical Collection as a new theme. Replicating houseplants and cut flowers with LEGO elements, it has become wildly popular, helped – no doubt – by its clever marketing strategy. Relax. Unwind with LEGO. Take some ‘me’ time. It was even described as a mindfulness exercise.

It brought in many new fans to the hobby, some of whom may now be looking for other sets to relax with. If that’s you, we strongly urge you to go and read one of our many other excellent reviews, because this set is about as far from relaxing as it’s possible to get. If, on the other hand, you relish doing battle with the most complex creations that Technic designers can muster, read on: this is right up your street.

Before we get to that, a quick bit of background about the car this set is based on. A Ferrari on the road is a rare sight at the best of times, and that’s the ones that you can actually buy. For some time now, Ferrari has been manufacturing limited edition runs of cars that you have to be invited to purchase. Just having vast sums of cash isn’t enough. If you don’t already have a collection of Maranello’s finest in your garage, then give up hope of getting your hands on one of the rarities.

The Icona series, which aims to develop new cars that are inspired by classic Ferrari models, was launched back in 2018 with the Monza SP1 and SP2, both of which were limited to 499 units. They are now joined by the Daytona SP3, which is primarily inspired by the Ferrari 330 P4 endurance racer from the 1960s. It’s limited to 599 examples, each going for around $2.25m. The 499 people who bought the Monza SP1 & SP2 have already ordered their SP3s, while the remaining 100 were offered to ‘specially selected customers’.

So if you want to get your hands on one, LEGO Technic 42143 Ferrari Daytona SP3 is going to be one of the few ways in which you can do it. Let’s take a look…

Before we get to the build, let’s just take a moment to admire the box. In similar fashion to 42115 Lamborghini Sián FKP 37, the packaging reflects the contents beautifully. Rather than flaps to open or (shudder) thumb tabs to rip, the top of the box slides off, revealing three inner boxes, which give a stylised view of the rear of the car. Opening box one presents two hefty manuals in Rosso Corsa, or Racing Red. There are about a dozen pages that give some background to both the car and the model, and then it’s on with the build.

If you’re going to attempt this build – and we use the word ‘attempt’ advisedly – you’d better bring your ‘A’ game. While the set starts with one of the most complex elements, the gearbox, it’s fairly straightforward as the diagrams are clear. Take it slowly, check your working and after about 90 minutes you’ll have completed the job. The massive V12 is a piece of cake by comparison and soon after, it’s on to the rear subframe. Previous Technic sets have used the standard shock absorber element, but for the Ferrari, there’s a new element, 6404005, which dwarfs what has come before.

The chassis and front subframe are, again, a challenge – but stay focused, check moving parts don’t snag as you go, and gradually the car takes shape. Then it’s on to the bodywork, and this is where the trouble/fun/headache (delete as appropriate) begins.

With the possible exception of Lamborghinis, which seem to be designed with a ruler, supercars are a mass of flowing lines and the SP3 – with its echoes of the 1960s – is especially curvy. The bonnet nestles between two rising front wings. The waist of the car, at the rear of the doors, is cinched in and then the bodywork bursts out again to flow like treacle over the rear haunches.

All of which is a problem for the not-very-curvy medium of Technic. But you will be amazed at what the designer has created – later. When the set is complete. Then you’ll be amazed. While you’re building it, however, you’ll be tearing your hair out…

Recreating the complex shapes of the bodywork has required some out of the box thinking. In our review of January’s 42130 BMW M 1000 RR, we wondered if that set was reaching the limits of what a Technic set should ask of someone. In this particular case we’re pretty sure we have reached – if not passed – what’s possible to clearly illustrate with a set of instructions.

Time and time again you’ll find yourself looking at an image of a new part being added and not have the faintest idea how it attaches. Most of the time you’ll work it out, but we did spend more than an hour rebuilding the rear of the car, convinced the instructions had an error, before finally hitting on what must have been the answer. We moved on with the words of our old maths teacher ringing in our ears: “It’s not enough to just show the answer – you must show your working out.”

But eventually you’ll attach the huge, drum-lacquered wheels, build the display plaque and sit back (with a momentary whispered ‘thanks’ that this set contains no stickers) and admire your handiwork.

It’s not for the faint-hearted, and you definitely need to have some experience of Technic before breaking the seals on this set, but the sense of achievement on completion is worth the hours of sore fingers and head scratching.

There are no minifigures with this set, as is normal for a Technic product. However, there is enough space in the front luggage compartment if you needed to store one somewhere. Just saying.

It’s an expensive set, there’s no two ways about it. You’re getting nearly 4,000 parts admittedly, but more than that you’re getting an incredible challenge. With a set like this it’s less about price-per-piece and more about the build experience, and for Technic fans it doesn’t get much better than this.

In addition you’ll end up with a substantial display piece that is beautiful, insofar as Technic can be. It’s a considered purchase, but one that you’re unlikely to regret.

There’s a quote, in Vol. 1 of the instruction book, from Carlo Palazzani, Head of Sports Car Exterior Design at Ferrari. He says: “The main task for the model wasn’t to produce a faithful replica of our original car – it was being able to distil its fundamental spirit.” To that end, it must be said the designers have succeeded.

Technic as a medium does not lend itself to accurate representations of the subject matter in the same way that ‘regular’ LEGO does. You only have to look at the remarkable 10294 Titanic, a set that, from a distance, is barely recognisable as LEGO, to see what can be achieved. Looking at the completed Ferrari, critics could point to the gaps between panels and the doors that can feel a little flimsy, or the fact that the windscreen is merely suggested, via flexible rods, and that the interior takes ‘minimal’ to a whole new level.

But that’s not what this set is about. As with many Technic sets, many of the highlights are buried away inside, only to be admired as the build unfolds – that gearbox, the way the steering linkage snakes through the chassis, how the centre console bends to clip into place.  There are the working paddle shifters, the suspension, the engine itself. And then there are the doors.

Many supercars have scissor doors that push up, rather than out. The SP3, however, has swan doors. As the door rises up, the bottom of the door angles outwards, presumably giving the occupants easier access. The model replicates this motion amazingly well, and time and again you’ll find yourself opening a door just to watch the mechanical ballet. Sure, you sometimes have to prod the door back into place when you close it, but that’s just nitpicking.

As a finished model, it’s one that looks best from a distance, not least because of its size – you have to step back to drink it all in. From there you can pick out the hints of Ferraris that have gone before. The front wings that are reminiscent of the 308, the curves of the 330 P4 and that rear that can only have been inspired by the none-more-’80s Testarossa.

If you’ve got the 42056 Porsche 911 GT3 RS, 42083 Bugatti Chiron and 42115 Lamborghini Sián FKP 37, then you’ll already know that you have to buy this to sit alongside them. For newcomers to Technic, pick it up by all means, just get a bit of practice in with smaller sets first. But if Technic is very much your thing, and you’re prepared for a love/hate relationship that lasts 20 hours or so, then this is your next build.

Help keep Brick Fanatics in the fast lane by buying your next LEGO set via our affiliate links. Mille grazie!

How long does it take to build LEGO Technic 42143 Ferrari Daytona SP3?

42143 Ferrari Daytona SP3 will take around 20 hours to build – quicker if you don’t make any mistakes, and considerably longer if you do. There are 33 bags containing 3,778 pieces including a printed display plaque and – hoorah – no stickers.

How many pieces are in LEGO Technic 42143 Ferrari Daytona SP3?

How much does LEGO Technic 42143 Ferrari Daytona SP3 cost?