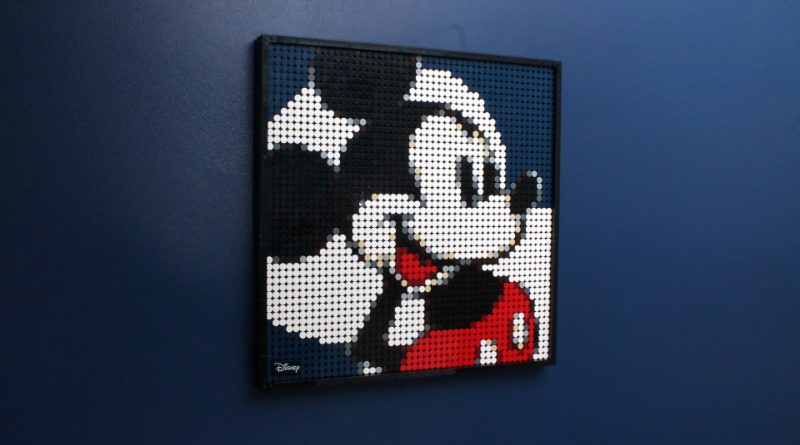 LEGO Art is here to stay, with at least two new products launching on January 1. 31202 Disney’s Mickey Mouse brings a familiar LEGO theme to the line-up, providing another entry point for that untapped group of would-be AFOLs that LEGO Art is clearly intending to capture. But where the initial range of mosaics explored different avenues within the LEGO Art wheelhouse – like 31200 Star Wars – The Sith’s original imagery, or 31197 Andy Warhol’s Marilyn Monroe’s depiction of historic artwork – 31202 Disney’s Mickey Mouse feels a little too safe to get excited about.

Where other LEGO Art sets have offered four alternative images to choose from (or three, plus one created by combining multiple copies), the first Disney-themed entry in the series serves up just two: Mickey and Minnie Mouse. They can be combined, too, but only insofar as stripping away an edge of each frame and sticking them together. It feels slightly underwhelming at first glance, particularly given the decades of history that precede these characters. Mickey’s design has changed several times since debuting in the 1928 animated short Steamboat Willie, but 31202 Disney’s Mickey Mouse hasn’t really explored any of the toon’s storied past.

Instead, it plumps for probably the best-known depictions of Mickey and Minnie, and plants them on what appears to be a fairly abstract background.

We’ve already covered the very unique LEGO Art build process in our earlier review of 31199 Marvel Studios Iron Man. And given the only real difference between these models is the colours of the 1×1 tiles (or plates) used, you can expect the same thing here: nine 16×16 squares that assemble into a 48×48 grid of individual pieces, surrounded by a brick-built frame. An accompanying podcast enhances the experience, but the soundtrack for 31202 Disney’s Mickey Mouse wasn’t available at the time of writing, so we can’t tell you if this one was any good.

The frame comes last, so once you’ve picked which of the two images you’re building, you’ll dive right in with laying down tiles. It’s an experience unlike any other across the entire LEGO portfolio – for better and worse. It’s undeniably cathartic, and requires genuine concentration, fulfilling the LEGO Group’s promise of an activity to distract you from your otherwise terrible life.

As you dig into each individually-built square, you’ll appreciate the subtle shading achieved by pairing tan and light grey elements with white, or the sparingly-used dark brown among the dark blue background. It really does feel like you’re painting with those pieces, and adds welcome depth to the originally flat image. But by the time you reach the third or fourth of those nine squares, the novelty might begin to wear off. There are really no surprises in a LEGO Art set, in the same way that other, three-dimensional models can wow you with interesting build techniques or cool parts. What you see is very much what you get.

With 31202 Disney’s Mickey Mouse, that’s an image that’s very clearly targeted towards adults looking for a classier, more subdued homage to a childhood favourite. The dark blue background is subtle, but also doesn’t provide much contrast to the black, so it falters slightly in low light conditions. The odd white shape reveals itself to be a mouse’s ear when you connect both Mickey and Minnie together, but on its own, it only further reinforces that monochromatic feel. It all adds up to a build that could struggle to excite you, even compared to other LEGO Art sets – particularly if you favour bolder, brighter colours.

Would minifigures of Mickey and Minnie Mouse have added a little more value to 31202 Disney’s Mickey Mouse? Probably, but they’d also have felt like unnecessary additions. There’s nowhere logical to put them, and if you’re approaching this set as a first dive into the adult LEGO portfolio, you may not be after minifigures anyway. The LEGO Group is very clearly targeting a different kind of consumer with LEGO Art, and the absence of minifigures speaks to that approach.

When you first open the box to 31202 Disney’s Mickey Mouse – or indeed, any LEGO Art set – you might feel a little underwhelmed by what you find. There’s the 16×16 bricks that connect for the larger grid, and a smattering of bricks, plates and tiles for the frame, but otherwise, it’s all about those round 1×1 tiles. And while more than 2,000 of those elements sounds impressive on paper, it doesn’t look it in reality.

You’re not really paying for the materials, though. That’s clear from the price tag, which is consistent with previous LEGO Art sets – despite the few hundred fewer tiles included here. From the packaging to the marketing materials that surround the theme, the LEGO Group evidently sees investing in a piece of LEGO Art as more about the experience of building your own artwork. If you can accept paying £114.99 for any of these mosaics, then, the value of an individual set ultimately comes down to how much you enjoy the LEGO Group’s execution of the subject matter. Just like real art (not to say this isn’t real), its worth is totally subjective.

Except, of course, you can only build two different images here…

It’s not hard to see the thought process behind 31202 Disney’s Mickey Mouse. It takes classic imagery of two iconic cartoon characters and places them against a subtle backdrop – the kind that would fit into any home setting. But is that really what Disney fans want from a LEGO Art set? The number of adults who queue up at Disneyland every year (sans kids) suggests their devotion to the House of Mouse is something they’re comfortable displaying loud and proud, rather than discreetly blending into their home décor.

Even if that isn’t the market the LEGO Group is gunning for, 31202 Disney’s Mickey Mouse feels like it’s played things a little too safe. It’s not quite the celebration of the source material we’d hoped for when initial rumours of the set appeared online, and would have been better served by both a bolder background, and a greater variety of images to build.

That said, it’s hard to go truly wrong when you’re dealing with two of the most recognisable characters in film and television history. Regardless of their backdrop, some smart use of subtle shading brings these familiar faces to the fore – and Disney fans will likely still jump at the chance to display LEGO Mickey and/or Minnie at home.

Find your inner artist and support the work that Brick Fanatics does by purchasing your LEGO Art through one of our affiliate links.