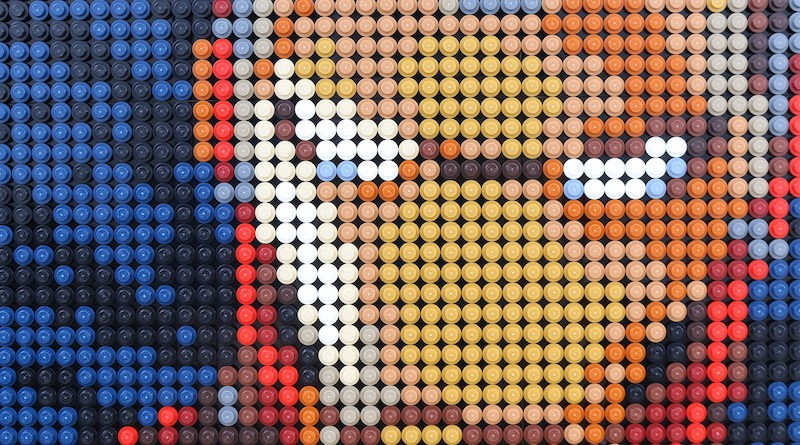 31199 Marvel Studios Iron Man is a premium product with a premium experience, reflective of how LEGO Art is an entirely new way of thinking and building

Marketed as a premium product and certainly listed at a premium price tag, LEGO Art represents a genuine change in direction and pace from the LEGO Group. Venturing further into adult territory than ever before, the company is presenting here an innovative building experience and a truly different finished product, and phrases like ‘you don’t need to be an artist or have a collection of LEGO models’ clearly indicate their view that LEGO Art – as much as it will be for anyone – is targeted for a new audience.

With the opportunity to recreate some famous pop culture icons past and present, the four sets on offer at launch are designed to tap into the subculture that exists around modern graphic art and imagery, with a hands-on experience that for non-LEGO fans promises a new medium to recreate some iconic art with, and for LEGO fans suggests a LEGO set like none that have come before.

What makes LEGO Art all the more interesting, then, is how it aims to deliver those dual fan experiences using only thousands of the smallest 1×1 rounded tiles or plates (depending on the set) to build with, and at a price that more than raises an eyebrow.

Does it succeed? Surprisingly, yes, thanks in no small part to a design process that has focused as much on how LEGO Art connects with the builder’s world, as its LEGO pieces fit together.

In considering LEGO Art, and in this case 31199 Marvel Studios Iron Man, the soundtrack is a good place to start. Put together by the LEGO Group and marketed as something to play whilst you build the set, what could otherwise by just a gimmick to push up the ‘premium’ price tag is in fact a useful and insightful companion. It is useful in that it helps to distract during a build process that admittedly at times is otherwise repetitive and laborious, and it is insightful for how the LEGO Group has brought in some heavy hitters to talk through the wider story behind the source material – here that’s Marvel and Iron Man. In who they have selected to talk through that story makes for not only a definitive starting guide on the subject matter at hand, but little glimpses of deeper insight that few others could provide.

This genuinely interesting listen really helps move the build process along, even if its running time may fall short of that required to complete the set. It’s a construction split across nine equally-sized 16×16 grids that when all finished are put together to complete the overall picture. Splitting the build across nine similar but compartmentalised stages like this makes the whole process much easier than with other LEGO sets to dip in and out of. And, for the repetitive nature of placing single 1×1 rounded plates on, you’ll want to do that, both to give your hands and your eyes a break. Staring at that many small, uniformly designed pieces in grids can and will give you occasional LEGO blindness.

It’s by no means a boring build throughout, though, nor an easy one, with both the challenge and interest particularly raised when faced with busier grids to put together. It’s a process that requires a precise hand and an attentive eye.

To help with that, the instructions are put together in a completely new way, with each double page showing just the completed grid in two views, as opposed to the step-by-step nature of traditional LEGO instructions. On each left-hand page is the more familiar front three-quarter view that most other LEGO set instructions display build steps in, whilst on the right-hand page is a top down grid, with each 1×1 rounded plate coloured but also numbered, and a corresponding key placed to the left. Whilst you may be drawn to the left-hand page at first, it is the right-hand display that proves far more intuitive as an approach to building each grid.

For both complete novices and more experienced LEGO builders, it’s such a new approach that will take a bit of adjusting to, but one that genuinely pulls you into the build much faster and with more interest. You’re not looking at a completed LEGO build as much as a build-by-numbers picture that, as you work through each line of the grid, or each colour on it, gradually creates this bigger image in front of you. Coupled with that soundtrack, the experience of putting together 31199 Marvel Studios Iron Man – or any of the other three LEGO Art sets released alongside it – is at once both unique and engaging to anyone, regardless of their previous experiences and interests with LEGO as a building form.

One area where familiarity with the brick may still come in handy, though, is in the time each grid may take to complete – likely anything from half an hour to an hour. But even so, with the entire build experience designed to be dipped in and out of after each grid, that’s a far more suitable and social period of time to ask of anyone at any one stage, particularly in comparison to the larger scale LEGO builds that are being aimed at the same age group.

Once each row of three grids is completed, you put them together with Technic pins for a further tease of the bigger, final image, before eventually completing and combining all nine and then securing it altogether with a surprisingly more-substantial-than-expected frame.

There are two Technic pieces attached to the back of the frame that are designed to be able to hang the completed frame on a wall, but somewhat disappointingly there is no stand construction to be able to lean the finished build on. That’s perhaps out of style for what the LEGO Group is trying to sell the product as – it’s artwork and artwork is traditionally framed on walls. However, for how you pick up the completed model, for how it can stand on its frame anyway, and for consideration of what it is made of, it would have been a nice extra detail for a different display option. If you also glance at the marketing images for the product, as many show it perched on desks, shelves or storage cabinets as show it hung on the wall.

It’s a small quibble about an otherwise premium product, though. This is a set that has been priced at a certain level and importantly it delivers, thanks in no small part to an immersive and genuinely new build experience, and a finished model that credibly has the feel, texture and size you would expect of something labelled ‘LEGO Art’.

There is enough detail in the image created to capture enough of its contours and features without taking away from the pixel-effect that has been used to create it. The colours are both vibrant and intelligently used (it’s not all red and gold…) across the 2,304 1×1 pieces to create an image both imposing and eye-catching, with just the right balance of depth and contrast. For how it’s put together and for how it works so well as a final piece, 31199 Marvel Studios Iron Man – and most likely any of the other three available – will stand apart from anything else in your collection of LEGO, your collection of prints and artwork, or from anything else in whatever room you choose to display it.

Ultimately, for what could have been a gimmicky, repetitive and uninteresting build process to create a dull and two-dimensional, flat image, LEGO Art brings quality, intrigue, and new life both to its own medium and to images from pop culture that may otherwise feel overly familiar at this point. And it’s all due to a design process that has clearly and cleverly taken the user experience into consideration at every stage of the process.

It’s unusual to suggest that a LEGO set made up of only thousands of 1×1 rounded plates or tiles could be worth over £100, but, through a keen understanding of its audience, the LEGO Group’s venture into uncharted adult territory is fully justified, as is that price tag.

You can directly support the work that we do at Brick Fanatics by purchasing your LEGO via one of our affiliate links. That provides Brick Fanatics with a small percentage of your spend at LEGO.com.