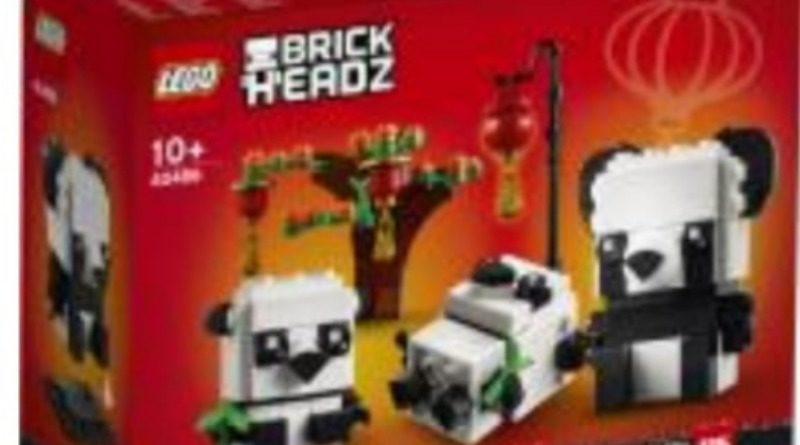 LEGO BrickHeadz looks set to take on the animal kingdom in 2021 with the release of a new set featuring a family of pandas.

Bouwsteentjes reports that Brickset has unearthed a very low-res image of 40466 Chinese New Year Pandas. The set features an adult and two baby pandas, one of which is playfully rolling on their back. Unusually for the BrickHeadz theme, the set also looks to include a few pieces of decorative scenery. On the box art the pandas are seen frolicking under a brick-built tree and Chinese lantern.

The reveal follows hot on the heels of the appearance of two more animal-orientated LEGO BrickHeadz sets scheduled for release next year, 40440 German Shepherd and 40441 Shorthair Cats. With these three new sets fans will soon be able to create a whole menagerie of BrickHeadz.

Although there is no official word yet on a release date, the anticipated set name, ‘Chinese New Year…’, and the distinctive packaging would suggest it will be early in January 2021. The red box and decorative lantern-motif are in a similar style to previous Chinese New Year sets indicating this set will launch as part of next month’s new wave.

Two other Chinese New Year sets 80106 Story of Nian and 80107 Spring Lantern Festival have already been revealed to be launching on January 10.

The LEGO Group has been making a concerted effort to conquer the Chinese market in recent years, with the waves of New Year sets and the recent Chinese-inspired Monkie Kid theme. Pandas are native to China and have become an international icon of the country, so this new set certainly fits the brief.