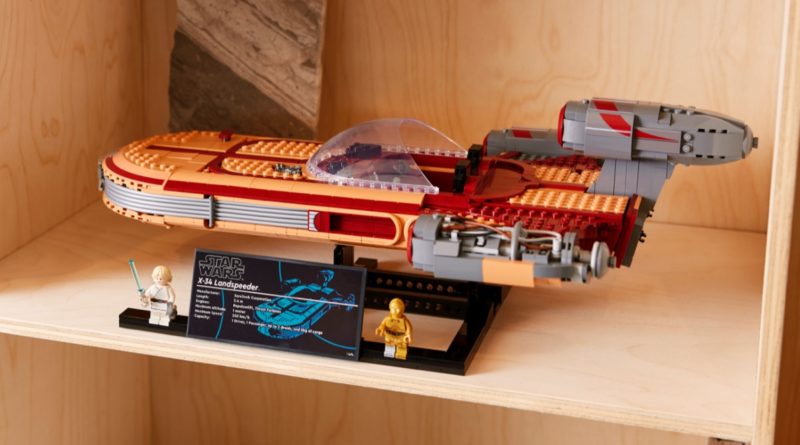 LEGO Star Wars 75341 Luke Skywalker’s Landspeeder includes the best C-3PO minifigure to date – but if the LEGO Group is true to its word, it won’t be exclusive to that set.

With arm printing, side-leg printing and a dual-moulded silver leg, the latest Ultimate Collector Series set’s Threepio minifigure is far and away the most accurate and detailed recreation of the character we’ve ever seen in LEGO. But at least at launch, he’ll only be available in that one set, which has an entry barrier of £174.99 in the UK, $199.99 in the US and €199.99 in Europe.

If the LEGO Star Wars design team’s views on exclusive minifigures are to be believed, however, he won’t remain exclusive for long. Last year, LEGO designer Hans Burkhard Schlömer reflected on the minifigure selection in 75309 Republic Gunship, which includes Mace Windu and a generic Clone Commander – much to the chagrin of those fans hoping for a new Commander Cody or Jedi Bob minifigure.

“It’s just not okay to put a super-rare minifigure into a super-high price point, because not everybody can afford it, and those minifigures will be super-sought-after,” Hans said at the time.

While certain previously-exclusive characters have made their way into cheaper sets over the past few years – including the Gunship’s Clone Commander – the designer’s comments have still been met with scepticism from pockets of the community, especially given sets like 75290 Mos Eisley Cantina include an improbably high number of exclusive minifigures.

To the design team’s credit, though, Ponda Baba, Dr. Evazan and the rest of Mos Eisley’s alien gang are basically only relevant for that particular scene – and could only really be justified as including in a set of that particular size, when you’ve already got the rest of the main characters present.

C-3PO, on the other hand, is common enough that he’s popped up in sets across the entire price spectrum of LEGO Star Wars, and so there should surely be no reason not to just make this definitive version of the droid standard from now on. If only.

For now, at least, it doesn’t look like that’s going to be the case: the protocol droid is about to land on shelves again in 75339 Death Star Trash Compactor Diorama, and while that minifigure is also a brand new and upgraded version – this time with arm printing – it still doesn’t boast the dual-moulded legs of C-3PO in the UCS Landspeeder.

That the LEGO Group would go to the lengths of including two new, but different, versions of C-3PO between the two sets – even while they’re both 18+ models focused on display – suggests it probably doesn’t have any immediate plans to make the dual-moulded minifigure more widely available.

Of course, it’s worth bearing in mind that Hans’s comments are really only the views of a single designer, and not necessarily representative of the LEGO Group. And even if the dual-moulded Threepio does end up being walled off behind a £174.99 / $199.99 / €199.99 price point while 75341 Luke Skywalker’s Landspeeder is on shelves, there’s always the possibility that it finds its way into another set once that UCS model retires.

Still, if you really don’t want to risk missing out on the best C-3PO minifigure to date, you’ll probably want to pick up 75341 Luke Skywalker’s Landspeeder when it launches on May 1. And hey, you’ll at least bag a couple of free gifts for your trouble…

One thought on “If LEGO is true to its word, C-3PO shouldn’t be locked behind the Landspeeder”