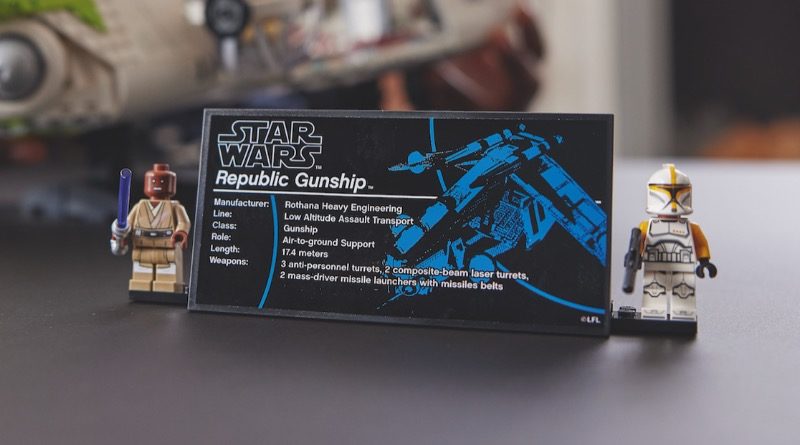 The LEGO Star Wars designers have revealed how they decided which minifigures to include in 75309 Republic Gunship.

But with calls for an updated Jedi Bob and specific, named Clone Troopers (Commander Cody, for instance) circulating across social media for the past year, those two minifigures may not be who many fans were hoping to see in the first prequel-trilogy UCS set since 2010.

Speaking to LEGO Fan Media (including Brick Fanatics) during a recent roundtable, LEGO designer Hans Burkhard Schlömer and LEGO Star Wars Creative Lead Jens Kronvold Frederiksen revealed why they decided not to include such highly-requested minifigures as Cody or Jedi Bob, and instead added a couple of less in-demand characters.

“We put in two minifigures for good measure, because people expect it – even though we keep saying with a model like this it’s really not about minifigures,” Hans explains. “We put in minifigures that are appropriate, but I personally feel they shouldn’t be super-rare collector’s items.

“It’s just not okay to put a super-rare minifigure into a super high price point, because not everybody can afford it, and those minifigures will be super-sought-after. But in this case, I think we found a good middle ground: we picked a Jedi, Mace Windu, and a Clone Commander, which also doubles as a pilot for this vehicle.”

With more than 30,000 fans voting for the UCS Republic Gunship in 2020’s LEGO Ideas poll, the design team also had a wider LEGO Star Wars audience in mind when approaching the minifigure selection – and that meant opting for more recognisable characters.

“We wanted to add something that was cool and interesting,” Jens explains. “It’s a nice little accessory to the model to display on the stand. They have relevance, they relate to the source material. We had to pick and in the end, we decided that those two were definitely good minifigures to add.”

“Let’s be honest, all most people remember from the movies is that there was a Clone Trooper with some yellow markings on the helmet piloting the vehicle,” Hans adds.

For more on 75309 Republic Gunship, check out the official reveal, our comprehensive image gallery, and our detailed review. Plus, learn why the UCS set was a ‘nightmare’ to design, and how it sets a new record for the LEGO Group.