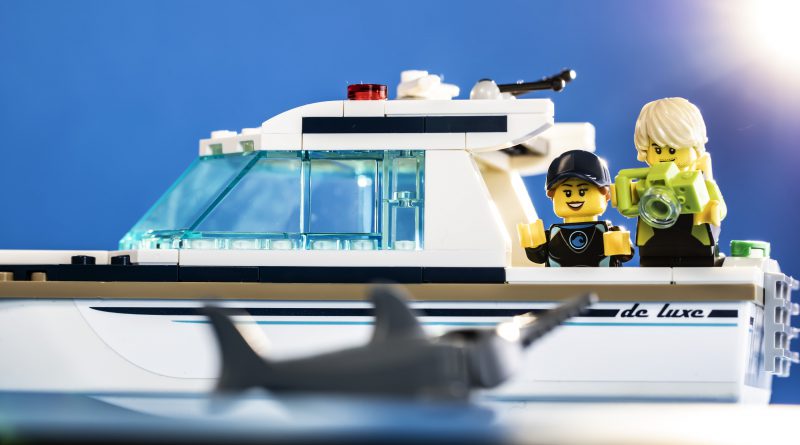 LEGO City 60221 Diving Yacht gives fans a chance to search for treasure underneath the waves – is this set a hidden gem or just the dregs?

60221 Diving Yacht is one of the year’s new LEGO City sets building a sleek blue and white yacht along with a small underwater scene. The set contains two minifigures and a saw fish, which uses the same body as regular sharks but with a brand new head mould, exclusive to this set. As well as the build itself, the set includes more accessories – also a fish, a crab, a hidden treasure chest, snorkels and underwater camera equipment. 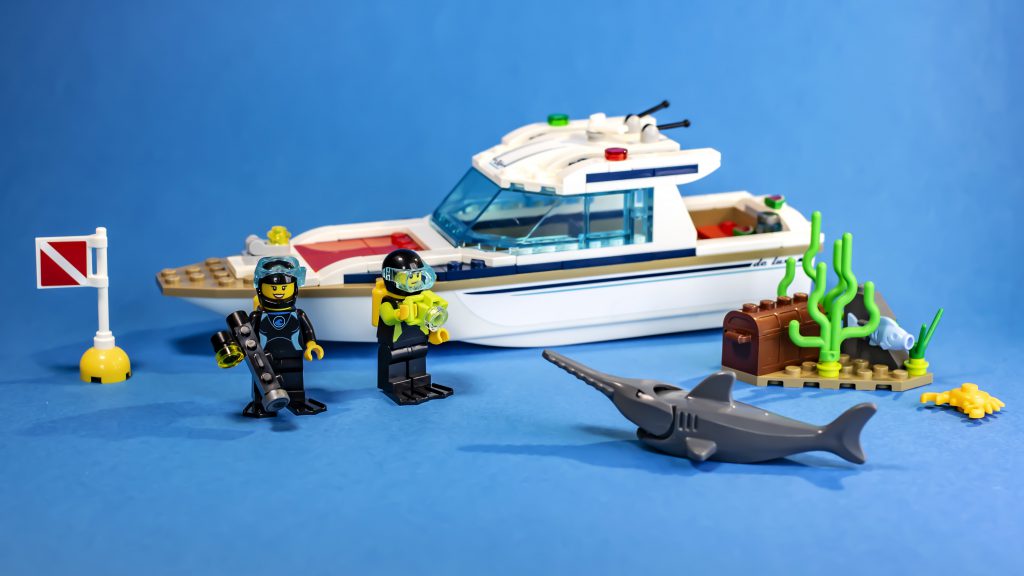 It may come as something of a surprise that this is the first LEGO City boat to be released in over a year (with the exception of the smaller 60176 Wild River Escape set), so is it worth the wait? The short answer is yes, but don’t expect a particularly immersive building experience.

60221 Diving Yacht contains two bags, a sticker sheet and a large singular hull for the yacht, which is another exclusive for this set. Some fans may be disappointed that it is not a brick built yacht but there is a good reason for that – unlike a lot of LEGO boats, this one actually floats. It’s a great feature that will no doubt enhance the play experience.

Luckily there are some elements to the yacht that require building, namely the front, including the moveable search light, and the roof, which can be removed for easy access to the interior.

Inside the boat is a steering wheel and display screen, which uses an excellent printed sticker of the saw fish underwater. There is a small seating area at the back of the yacht along with two ladders, giving the divers easy access to the water. A few more stickers around the outside of the yacht complete the look.

The yacht’s white, dark tan and dark blue colour scheme looks authentic for a vessel of this kind and while the finished design looks sleek, the set is severely lacking from any form of storage for the accessories and diving paraphernalia. A small box or container would easily have fit inside and proved really useful.

Along with the yacht there is a small buoy to build as well as a fantastic little underwater scene. It’s not particularly big, only taking up the space of a 6×6 corner plate, however it is packed with detail.

The use of a 1×1 clip used to attach the small blue fish to the rocks is a brilliant design choice. It is partly hidden by the seaweed and so gives the impression the fish is actually swimming. A small crab takes up his home in the included treasure chest, which also contains two red gems for the divers to find. The only thing that is missing is a trans-clear stand to place the saw fish upon.

The set also contains two minifigures, a male and female. Both have different wet suits, one green and black and the other blue and black. There is also a green camera and larger video camera to record their underwater adventures. As well as diving helmets, a moulded hair/hat piece for the female and a messy blonde hair piece for the male are included.

This is a set that won’t take long to build, though it includes plenty of play opportunities both above and below water. There is a whole host of accessories contained within and a nice menagerie of sea animals – the saw fish in particular is a great creature to add to a collection. All this, coupled with a fairly meagre price tag, makes this set great value for money and a worthwhile purchase.

60221 Diving Yacht is available now at shop.lego.com. You can help support Brick Fanatics’ work by using our affiliate links. 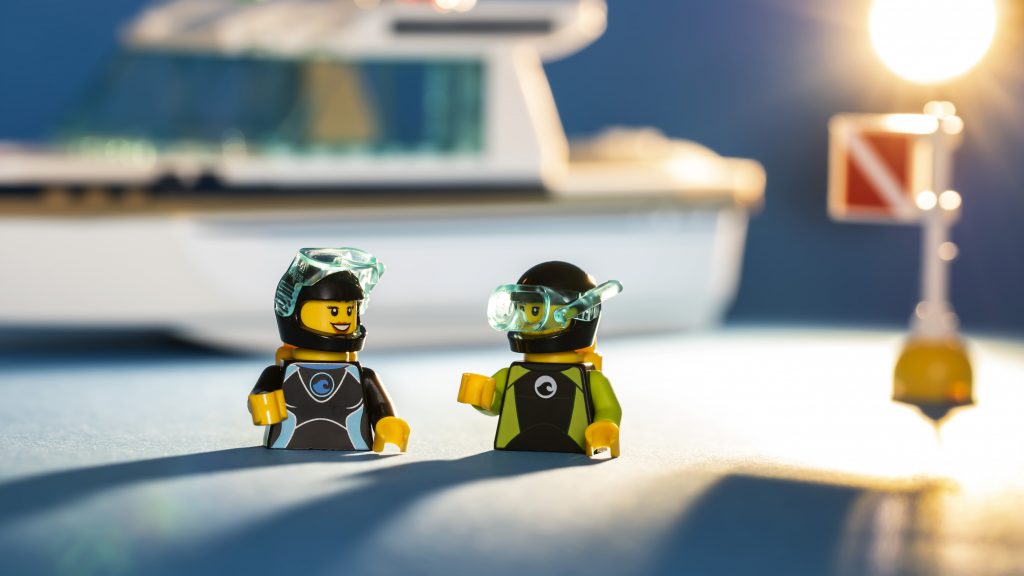