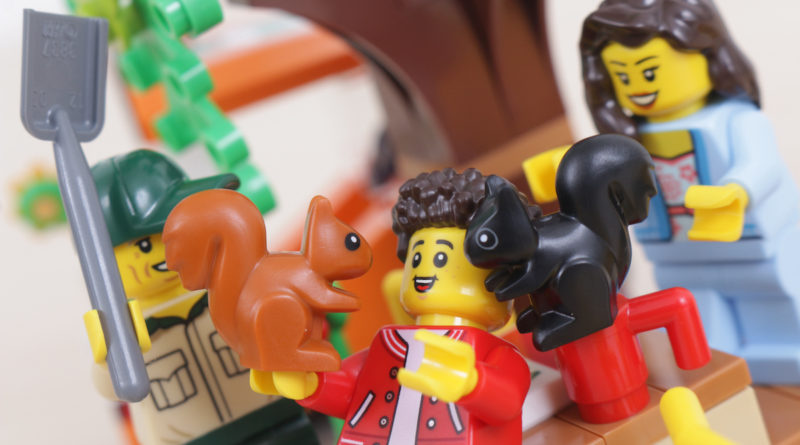 60326 Picnic in the Park is a pretty standard LEGO CITY set, complete with some smart and small side-builds, some exclusive pieces, a few minifigures and SQUIRREL!

Two squirrels in fact. While only a 5+ set and so otherwise designed with little to teach an older LEGO fan about technique or parts usage, 60326 Picnic in the Park remains an intriguing and early seller from the LEGO Group – there’s a reason this set initially sold out online upon release SQUIRREL!

Okay, we promise we won’t do that anymore. This is a review about all that is good about 60326 Picnic in the Park, and there is plenty to appreciate, even if most of us are only initially drawn in by SQUIRREL!

That was the last time, definitely. But you are likely drawn in just as we are by the new moulds for these cute little creatures – they are just brilliant and perfectly capture the alert expression and nature of a squirrel just so, and in the case of 60326 Picnic in the Park, across two different colours too.

The premise behind 60326 Picnic in the Park is at least at face value initially about the three minifigure characters in the set – the woman with young boy who are at the park for a picnic, and the nearby park gardener at work – but it is just as much about the picnic the squirrels are having of their own with the 1×1 rounded acorn tile, and indeed their inevitable invasion of the minifigures’ plans.

As mentioned at the top, this is a 5+ set in age recommendation so is very much a basic entry-level build for most LEGO fans not just starting out, but that barely detracts from what is a nice scene played out across a surprisingly low count of 147 pieces.

The gardener’s three-wheeled truck doesn’t need to be any bulkier than it is, be that in such a set as this or placed within a larger LEGO park setting, and the same can be said for the bench and tree – nothing suffers in design, detail or depth because of the piece count or the age recommendation, and that’s credit to a simply clever and fun LEGO set, made all the better by SQUIRREL!

There are three minifigures included, all of whom in their designs here are unique. While each minifigure features elements of their make-up that are common across a number of other current and previous releases, each has one set-exclusive aspect to them.

The boy’s hairpiece is new for 2022, and 60326 Picnic in the Park is the only place to find it in dark brown. The woman’s torso likewise is only found in this set, and it’s the same for the gardener’s head.

Exclusivity plays an important factor in determining the value of 60326 Picnic in the Park to a LEGO fan – it’s a fun build as it is, but for wider collectors or those looking for what’s new and interesting, there are plenty of parts you can only find in this set, from the aforementioned elements for each minifigure, to the bright yellow bike and the black squirrel.

The dark orange squirrel actually appears in four sets at the moment, while the acorn tile is in one other set too, but this is the cheapest set that both appear in, by a mile. Indeed, you may be surprised to see the price as low as it is, for the amount of good LEGO that is actually included in 60326 Picnic in the Park.

60326 Picnic in the Park packs a lot into a small box of bricks, with three small builds, three minifigures, a decent number of new and exclusive pieces and SQUIRREL!

The two squirrels included in this set are going to be the main draw for a lot of people – you shouldn’t buy 60326 Picnic in the Park just for them, but if they are the main reason you want this set, the good news is that the rest of it won’t let you down.

Support the work that Brick Fanatics does by purchasing your LEGO squirrels through one of our affiliate links.

How long does it take to build LEGO CITY 60326 Picnic in the Park?

60326 Picnic in the Park takes about 15 minutes to put together, due to the small number of pieces included and the young age recommendation on the box.

How many pieces are in LEGO CITY 60326 Picnic in the Park?

60326 Picnic in the Park comes with 147 pieces, including three minifigures for a woman, young boy and park gardener. There are also two squirrels included.

60326 Picnic in the Park is split across three small builds. The tree measures 13cm tall, while the yellow bike with trailer is 9.5cm long, and the gardener’s truck is 7cm tall, 5cm wide and 7cm long.

How much does LEGO CITY 60326 Picnic in the Park cost?