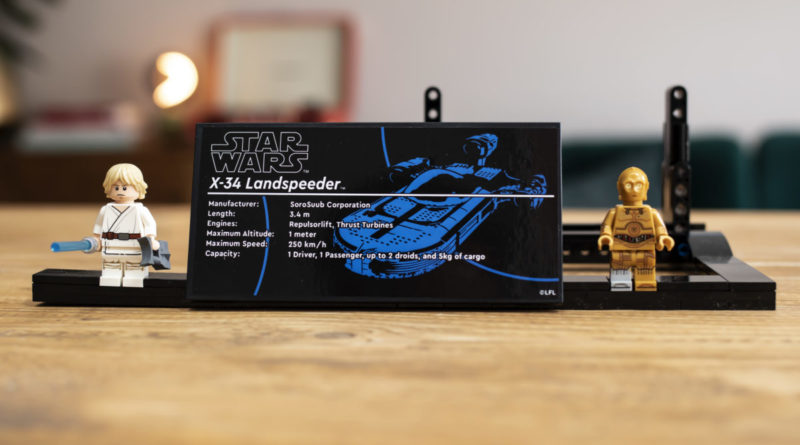 The LEGO Star Wars team has confirmed that plaques in Ultimate Collector Series sets will soon start to use prints rather than stickers.

While we’ve seen printed ‘information plaque’ elements in recent sets like 42143 Ferrari Daytona SP3, this year’s LEGO Star Wars UCS sets still use stickers on 8×16 tiles. The LEGO Group has now confirmed (via Brickset) that the 18+ subtheme from a galaxy far, far away will also switch to printed plaques, however, following in the Technic supercar’s tracks.

The company hasn’t specified exactly when this change will be implemented, but the newly-revealed 75331 The Razor Crest uses a stickered plaque – just like May’s 75341 Luke Skywalker’s Landspeeder and the rest of its UCS predecessors. That means there’s still a chance that the next Ultimate Collector Series set, thought to launch in May 2023, will use a sticker, too.

This will be good news for anyone who’s ever been frustrated by the struggle to align stickers, particularly in some of the LEGO Group’s most expensive sets. But there is a trade-off: the 8×16 tile has a small, round ‘dimple’ in the centre as a result of the injection moulding process. A sticker has traditionally covered that up, while printing leaves it exposed (as exemplified by 42143 Ferrari Daytona SP3).

Still, it’s a small price to pay for a plaque that will never peel. As long as it doesn’t come with yet another price bump, of course. Then it’ll be a moderate price to pay, at least.

75331 The Razor Crest launches October 3 for VIP members and October 7 for everyone else. Click here for a closer look at the 6,187-piece set.