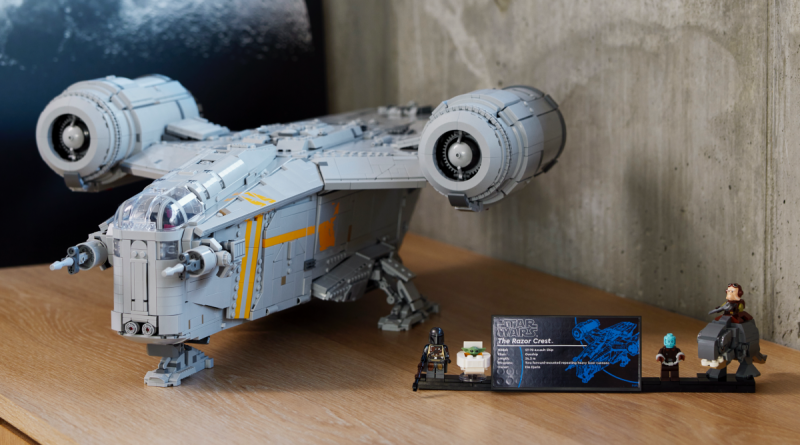 Here it is at last: the long-rumoured and long-awaited LEGO Star Wars 75331 The Razor Crest, an Ultimate Collector Series rendition of The Mandalorian’s original ship.

Coming in at 6,187 pieces, the final model measures a staggering 72cm long, which is nearly twice the length of 75292 The Razor Crest. That added size has allowed the UCS Razor Crest to incorporate removable brick-built engines, an escape pod and even a minifigure-scale carbon-freezing chamber, going above and beyond its much smaller (and far cheaper) contemporary.

Also included with 75331 The Razor Crest are four characters – a brand new Din Djarin, Grogu, and the first-ever minifigures of Mythrol and Kuiil (so no Ahsoka, unfortunately) – along with a brick-built Blurrg. There’s space for them all on the stand included alongside the ship, which also features the usual stickered information plaque packed into every Ultimate Collector Series set.

“It was amazing to design The Mandalorian’s Razor Crest in brick form!” said designer Cesar Soares. “I wanted it to be ultra-detailed so that every Star Wars and LEGO fan can enjoy discovering all the exciting features – from the carbon-freezing chamber to the escape pod. I know that fans of the Star Wars galaxy, builders and more will love recreating their favourite adventures from this extraordinary series.”

75331 The Razor Crest launches on October 3 for VIP members, and October 7 for everyone else (mirroring the release pattern of 10308 Holiday Main Street). In addition to standing 72cm long, it’s 50cm wide and 24cm tall, so best start making space for it now. Look out for our review later this week.