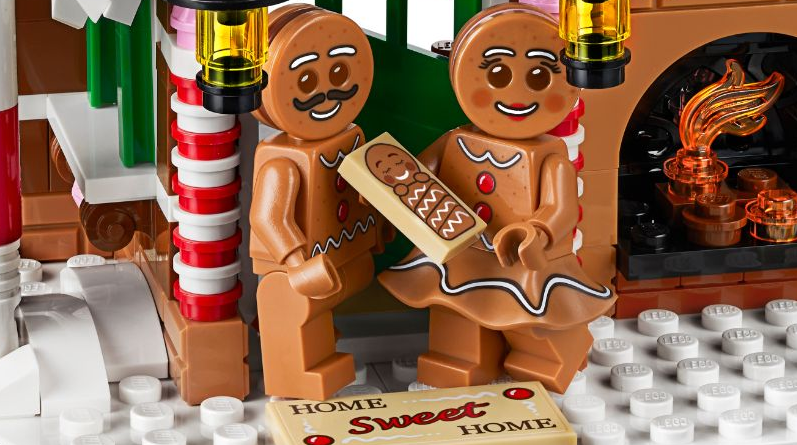 One of the best ways to see a LEGO set for the first time is to have it presented by one of the designers involved, which is precisely how I had the fortune of seeing LEGO Creator Expert 10267 Gingerbread House for the first time. Each year, the Winter Village set is one that I anticipate, so getting a glimpse at this was incredibly exciting – especially because it was so immediately appealing.

The first thing that must be addressed is that although it is named as a Winter Village set, it isn’t really one. The Winter Village that has built up since the release of 10199 Winter Toy Shop is a Christmas card world, but one that is inspired by reality. Each building that is added to the layout fits in with the rest, as they build out an idyllic world where the holidays never end.

10267 Gingerbread House, like 10245 Santa’s Workshop a few years ago, is a lovely Christmas set but would look entirely out of place alongside 10254 Winter Holiday Train or 10259 Winter Village Station. The people of the other sets would be very conflicted about what to do with these life-sized gingerbread folk – should they befriend them, or eat them? Christmas is about indulgence after all.

That distinction aside, this is a particularly charming looking set. Every place that can be stuffed with whimsy and sweet treats is, which makes it almost impossible not to imagine shrinking down and spending a day frolicking in this baked house. It is like a Christmas dream built in bricks.

More than that, the parts used to recreate some of the sweet treats are ingenious, with it seeming as if the designers went through every single element to see if it could be purposed as a cake or candy.

Having both an appealing exterior and decent interior is also deserving of praise, like last year’s 10263 Winter Village Fire Station, the set achieves what it needs to in terms of looking beautiful but also having something to fiddle with too.

Restraint was shown with the minifigures – including only two so that other aspects of the model could be enhanced was a good choice – and few character fans are going to grumble at a set that includes something as adorable as the gingerbread baby.

While it may not be one to add to the Winter Village display – and who has a shelf big enough for them all now anyway? – it will be one that will add more cosy festive fun in the run-up to the big day, with the LEGO design team once again demonstrating that they know exactly how to do Christmas charm.

10267 Gingerbread House will be released on September 18 exclusively at LEGO.com.