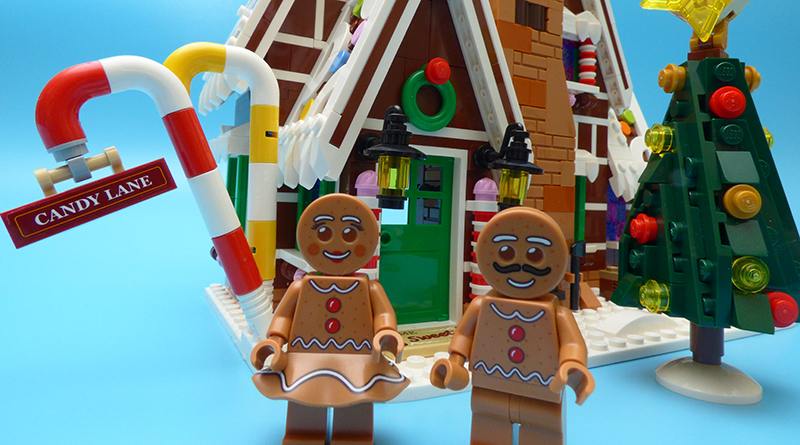 While constructing a house from gingerbread is a sweet delight, is building Creator Expert 10267 Gingerbread House from LEGO bricks just as joyful?

Each year, the LEGO Group releases a set for the Winter Village theme. The idyllic snow-covered buildings combine to produce a Christmas card village world that expands every time the holiday rolls around. On one occasion the team deviated from the ‘real world’ version of Christmas with 10245 Santa’s Workshop and have now done so again, with 10267 Gingerbread House.

Despite that, the LEGO Creator Expert design team managed to devise a way of making 10267 Gingerbread House a completely original, delightful festive treat. Taking the Gingerbread Man from LEGO Collectible Minifigures Series 11 as the core component in the model, the build provides a house for the character that manages to look both like a candy covered gingerbread house, while also serving as a scale home.

The Gingerbread Man is not replicated precisely in the set, although the head mould is re-used. A slightly redecorated version of the character features a moustache and red buttons to differentiate from the 2013 original. A Gingerbread Woman features a unique face print with eye lashes and pink filling, along with a redecorated Minnie Mouse skirt piece to complete her look.

In this fantasy world of living confectionary characters, babies are baked in the oven – so the Gingerbread Baby is printed on a 1×2 tile that can fit inside the oven, as well as in the pram, crib and on the rocking horse. The adorable little baby looks perfectly snug thanks to some detailed printing on the element.

The exterior of this model looks absolutely perfect, cleverly blending the fantasy world of the characters with the real way a gingerbread house appears. Sharp white lines in-between brown elements gives the illusion that this entire building is held together with icing. Every spare bity of space is filled with colour, denoting various candy treats that have been added to this sickly-sweet creation.

These range from candy canes that hold the road sign, through candy canes adorning the door, to the sparkly sweetie windows. Little touches that make this set so much fun are everywhere, down to the one stud swirly tiles affixed where the roof plates meet.

When it comes to the interior, there are two stories with plenty of space for the characters to be placed. The top floor features a bathroom, complete with bath, lavatory as well as green and red festive towels. A minifigure can fit inside the bath, which is filled with cholate rather than water. The bedroom re-uses the honeycomb element in pink for a candy floss lamp, while white chocolate is used for the bedspread. Every aspect of the set references delicious treats in some way or another.

Downstairs includes the living room, with a fireplace and armchair with chocolate cushions. The family portrait is an excellent inclusion provided by a detailed sticker, with the new Harry Potter candles sitting below it. A little kitchen features cookies as drawer handles alongside a sink and oven. A cookie piece is also used as a cookie – is it strange that gingerbread people eat other biscuits? What are the rules of this festive universe?

Alongside the main building are the smaller builds, with the Christmas tree at the centre. The rocking horse is particularly good, with an open stud allowing the Gingerbread Baby to ride on it. There are plenty of little presents, with one using a pretzel as a bow. The snowblower is brilliant, blending the typical winter device with the fantasy theme perfectly.

Building 10267 Gingerbread House set is very enjoyable. Unlike other LEGO Creator Expert sets, such as 10269 Harley-Davidson Fat Boy (review) and 10264 Corner Garage (review), this is not a model that will teach fans many new techniques, but it does have some neat little touches along the way. Putting it together feels like it goes more quickly than the time it actually takes, thanks to the constant variation – building is alternated throughout the process between the interior, exterior and decorative aspects.

Once again, the LEGO design team has risen to the challenge of providing a Christmas set that lives up to the expectation that has been created by the many excellent models that have gone before. At the price and piece count, it is hard to imagine what more could have been achieved – the set balances display and play perfectly, deserving a place on everyone’s shelf alongside the rest of the Christmas decorations this year.

10267 Gingerbread House is available now at LEGO.com. You can help support Brick Fanatics’ work by using our affiliate links.