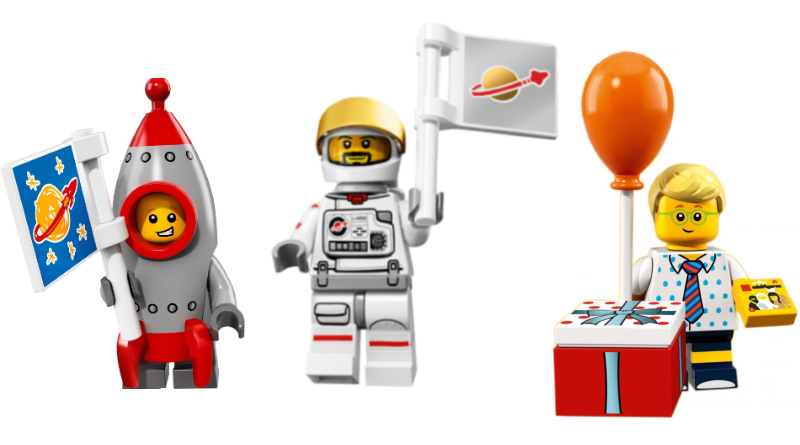 A LEGO designer has revealed that just a few of the many Collectible Minifigures draw inspiration from her own family, as well as how later minifigures reflected changes in the real–life people.

The latest Bits N’ Bricks podcast is all about minifigures, with hosts Brian Crecente and Ethan Vincent speaking to LEGO Senior Design Manager Tara Wike on how LEGO minifigures have changed LEGO video games and how the games have changed the minifigures. As part of the interview, a few details on how the popular Collectible Minifigures are developed were revealed, including how Tara’s own family inspired more than a few minifigures.

The LEGO designer’s son first appeared in LEGO form in 71018 Series 17. The minifigure that represented her son was Rocket Boy, featuring the exclusive minifigure rocket element. Tara highlights the figures, stating; “We have a lot of stories behind the ones that we create, they’re all real characters to us, and a lot of us involved in the project like to make ones that are either ourselves or friends of ours or family,” leaving fans to wonder just how many other minifigures could be based on real people.

Tara’s son would make a return in one of the next LEGO Collectible Minifigures series, 71021 Series 18 in the form of the Birthday Party Boy. This time, the character included a set of glasses adorned on his face, a change put in to reflect the real-life family member starting to wear glasses at the time. This is just a small example of how LEGO designers can give each of their creations a personal touch, and there’s no doubt that her son must have been pleased with receiving two separate minifigures based on him.

However, these weren’t the only two minifigures based on a member of Tara’s family, with her husband having a minifigure well before them. In 71011 Series 15 her husband makes an appearance as the Astronaut, with Tara working with other members of the Collectible Minifigures design team to work out a narrative reason why this space–faring character would have a beard, a prominent feature of the real–life family member. Eventually, the reason given was this Astronaut had simply been exploring space for so long that the facial hair had grown.