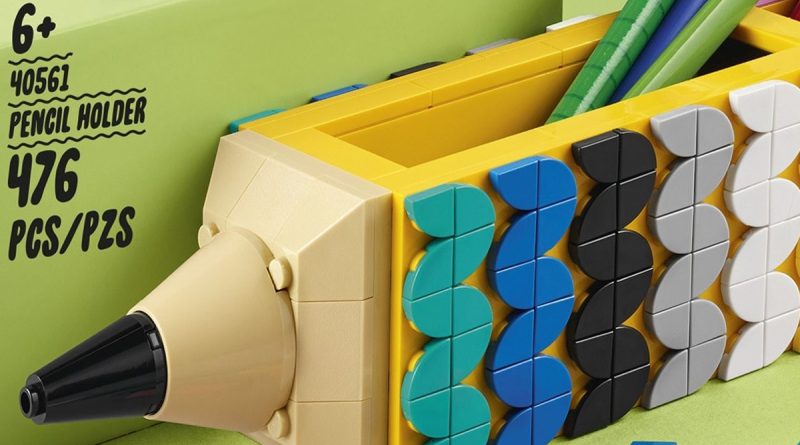 Some new promotional items are now up for grabs on LEGO.com sites, although American LEGO fans may be disappointed.

The LEGO Group frequently offers promotional items with orders over a certain threshold on its website. These are often exclusive to the promo period in question, giving LEGO fans a clear incentive to pick them up. A pair of new promotional items recently appeared on the Australian LEGO.com storefront – and now, we’re pleased to report they’ve popped up in other territories.

First up is 40561 Pencil Holder, an attractive new entry in the DOTS theme. Unlike previous DOTS sets this model actually resembles a pencil, although its longer shape may make it a bit impractical for its intended purpose.

The set is available with spends of £65 / €65 on DOTS, Friends and/or CITY sets until August 28, or until stocks run out. Troublingly, this set hasn’t appeared on the American LEGO.com site yet. This could mean the promotion will skip over the USA entirely.

Still, 30509 Yellow Yoshi’s Fruit Tree Expansion Set may prove more enticing – and is currently available in the UK, US and Europe. This small model includes a yellow Yoshi (and, well, a fruit tree) from the Super Mario franchise.

It’s also compatible with other models in the LEGO Super Mario range; you’ll need to spend £40 / $40 / €40 on LEGO Super Mario sets to acquire it. This promotion only runs until August 15, so we recommend you act fast.

If you want to get both promotions you’ll need to spend at least £105 / €105 on LEGO sets, as there’s no overlap in eligible products. However, 40515 Pirates and Treasure VIP Add On Pack is also still available for LEGO VIP members. This may sweeten the deal if you’re wondering whether to take the plunge – particularly as pirate-themed LEGO sets are relatively thin on the ground.

If none of these take your fancy, you may want to wait for 40513 Spooky VIP Add On Pack instead. The promotional text on LEGO.com suggests it’ll be popping up at the start of October, although that release date is pure conjecture at this point.